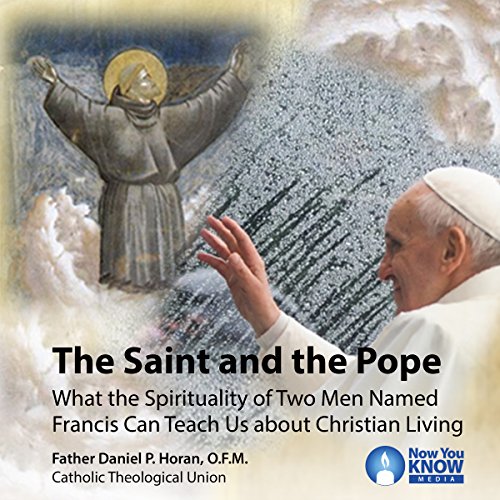 The Saint and the Pope: What the Spirituality of Two Men Named Francis Can Teach Us About Christian Living

The Saint and the Pope: What the Spirituality of Two Men Named Francis Can Teach Us About Christian Living

Explore the spirituality of two pillars of Christian living.

Both St. Francis and Pope Francis have captured the attention of the world, the former for centuries and the latter since his election as bishop of Rome. Now, in this 18-lecture course, you will explore the rich spiritual tradition of Francis of Assisi and the work of Pope Francis. You will give special attention to four themes: prayer, evangelical poverty, mercy, and creation.

In addition to learning about the life, writings, and teachings of these two inspiring men, you will discover how these themes provide a model of Christian living in the modern world. Under the guidance of Franciscan theologian Fr. Daniel P. Horan, you will gain an appreciation for the uniqueness of the Franciscan tradition and the ways in which St. Francis' example have inspired a Jesuit pope in the 21st century.

You will explore the profound Franciscan experiences of the practice of Christian prayer, the unmitigated embrace of evangelical poverty, the emulation of divine mercy when encountering all women and men, and a kinship with all of God's creatures. These key Franciscan spiritual themes were on the forefront of Cardinal Jorge Mario Bergoglio's mind when he took the papal name Francis. Throughout his pastoral ministry, Pope Francis has emulated them in his homilies, public addresses, interviews, prayers, apostolic exhortation, and encyclical letters.