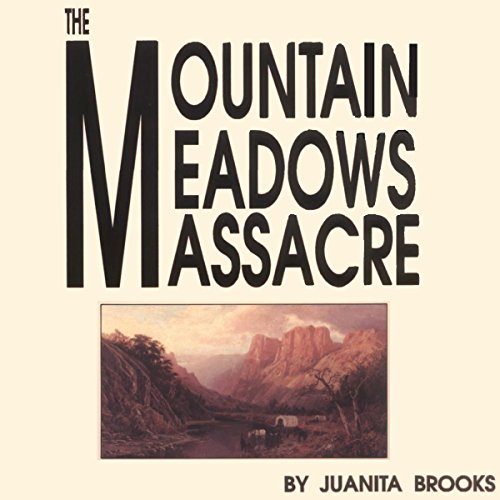 By: Juanita Brooks
Narrated by: Kirk Winkler
Try for $0.00

In the Fall of 1857, some 120 California-bound emigrants were killed in lonely Mountain Meadows in southern Utah; only 18 young children were spared. The men on the ground after the bloody deed took an oath that they would never mention the event again, either in public or in private. The leaders of the Mormon church also counseled silence. The first report, soon after the massacre, described it as an Indian onslaught at which a few white men were present, only one of whom, John D. Lee, was actually named.

With admirable scholarship, Mrs. Brooks has traced the background of conflict, analyzed the emotional climate at the time, pointed up the social and military organization in Utah, and revealed the forces which culminated in the great tragedy at Mountain Meadows. The result is a near-classic treatment which neither smears nor clears the participants as individuals. It portrays an atmosphere of war hysteria, whipped up by recitals of past persecutions and the vision of an approaching "army" coming to drive the Mormons from their homes.

What listeners say about The Mountain Meadows Massacre

Truth suppressed is its own kind of a lie.

"I owe it to myself and to my readers to tell all the truth, for truth sup­pressed is its own kind of a lie.”
-- Juanita Brooks in a letter to Justice Jesse Udall, 1961

"It seems to be a clear case of how a group, stirred and angered by reports perhaps only half true, frenzied by mistaken zeal to protect their homes and families and to defend their church , were led to do what none singly would have done under normal circumstances, and for which none singly can be held responsible."
-- Juanita Brooks, The Mountain Meadows Massacre

My father is an interesting case. His own father is descended from a group of anti-Mormon Methodists from Northern Arkansas and Southern Missouri. This is a geography that since the mid-1800s has never been very kind to the Mormons. His mother, however, came from a long-line of Mormons, stretching back to the Kirkland Temple days and before. Through my paternal grandmother, my 5th great-grandmother (Abigail Woolsey), who was the mother of both my 4th great-grandfather (Richard Woolsey), was also the polygamist wife of John D. Lee. It doesn't stop there. So, John D. Lee was married to my 5th great-grandmother (Abigail), and her two daughters (Agatha, John D. Lee's first wife) and (Rachael, John D. Lee's third wife). Confused? That's OK.

Basically, it means I'm not genetically kin to John D. Lee, but my 5th great-grandmother was married to him (but had no kids with him), and so were her two daughters (who did have a bunch of kids with him). Or said differently, my 4th great-grandfather's mother and two sisters were ALL married to John D. Lee. Why am I spending a paragraph describing some esoteric Mormon polygamist genealogy of a guy named John D. Lee? Well, because as my father would put it, prior to the Oklahoma City Bombing, John D. Lee and some other Mormons and Indians in Southern Utah were responsible for the largest act of domestic terror on American soil.

Juanita Brooks' book, 'The Mountain Meadows Massacre' is an early historical attempt to explain why this horrible event happened. There were a lot of things that happened that led to this horrible end. The Mormon War was just starting and Buchanan had sent an army to quash the Mormon Rebellion. Mormon's having fled Missouri because of persecution were wound up, thinking they were going to be set upon by the US Government. The Mormon Reformation was underway and there existed a certain level of religous hysteria and paranoia that was stoked at the church/state-level by Brigham Young and his apostles and at the local level by people who remembered the martyrdom of Joseph Smith and the persecutions in Illinois, Ohio, and Missouri. These things and more, prepared the ground and ignited a blaze that led to the death of 120 California-bound emigrants at Mountain Meadows in southern Utah. Only 18 young children were spared.

Juanita Brooks, despite a lot of opposition in the Church set out to tell this story using primary sources (the diaries and letters of those who participated). The story is chilling and is even more dark because these are almost directly MY people. It reminds you that given the right circumstances nice people can do wicked things, the abused can become abusers, and that given the opportunity those in power will always find a scapegoat. In this case, the scapegoat was my 5th great-grandmother's 2nd husband (and double son-in-law). A powerful book. It is a bit dated, so I will next need to read Massacre at Mountain Meadows and Blood of the Prophets: Brigham Young and the Massacre at Mountain Meadows to see what they have added and how the story has progressed these last couple decades. But we can't under-appreciate the influence that Juanita Brooks had on Mormon History. Her efforts at openness with LDS History are still relevant today. For a religion whose history is practically its doctrine, this is no small thing.

not correlated or filter a straightforward View

As a former Mormon, I heard about this growing up. I always was told that it never happened and or that it was done by members of the church who had left the church. When I asked about it my questions were met with ignorance of the subject or hostility. There is much said here I never knew. Read Blood of the Prophets too.

I lived in Utah for many years in the 80’s and early 90’s. I read many books about the history of the LDS church and as a gentile I was aware of this story, but had numerous LDS tell me this was untrue. Recently I visited the memorial in Utah and again was inspired to learn more. This book did an excellent job tracing the historical records and following those involved. The horror of what a group of fearful people can do, then manipulate one another is apparent and informative to our current political times. Thank-you to the author and the work this took to pull together.

It's SO slow. Kind of torture

Terrible pace and narration. This is actually an interesting historical story but you wouldn't know it by this telling. Read Under The Banner of Heaven instead.

Absolutely loved this book. Even if you have no interest in the Mormons as a religion you will enjoy this on the strength of the storytelling. It has all the familiar themes of settlers, Indians, and the frictions that develop with migration.

Juanita Brooks is clearly the most objective historian of this historical horror. The narrator uses correct tonality and emphasis to convey the intent of the author BUT needs a Primer in common Mormon pronunciations.

Well researched and written; the author thoughtfully and without bias tells of this curious and dark event.

I am a student of Mormonism and Mormon history. Juanita Brooks is an excellent historian and storyteller.

I grew up attending the LDS Church in Southeastern Idaho. I am shocked at the number of people that I have asked if they were aware of the massacre. None of the people I asked were lds members though. kind of scared to. the movie "September Dawn" is unavailable to rent in this area.