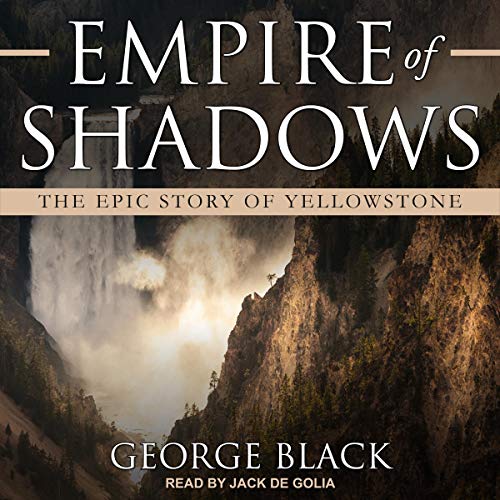 By: George Black
Narrated by: Jack de Golia
Try for $0.00

Empire of Shadows is the epic story of the conquest of Yellowstone, a landscape uninhabited, inaccessible, and shrouded in myth in the aftermath of the Civil War. In a radical reinterpretation of the 19th century West, George Black casts Yellowstone's creation as the culmination of three interwoven strands of history - the passion for exploration, the violence of the Indian Wars, and the "civilizing" of the frontier - and charts its course through the lives of those who sought to lay bare its mysteries: Lt. Gustavus Cheyney Doane, a gifted but tormented cavalryman known as "the man who invented Wonderland"; the ambitious former vigilante leader Nathaniel Langford; scientist Ferdinand Hayden, who brought photographer William Henry Jackson and painter Thomas Moran to Yellowstone; and General Phil Sheridan, Civil War hero and architect of the Indian Wars, who finally succeeded in having the new National Park placed under the protection of the US Cavalry.

George Black's Empire of Shadows is a groundbreaking historical account of the origins of America's majestic national landmark.

"...a masterful and riveting history of the exploration of Yellowstone. Empire of Shadows will forever change our understanding and conception of this sacred American place." (David Grann, author of The Lost City of Z)

What listeners say about Empire of Shadows

Detailed description of the various events that took place in the area. Book doesn't focus much on the park itself, but more on the various military and other exploratory events. If you are looking on the details of the National Park's creation and non-military events that happened inside the park after its creation, this is not the book for you.

I thoroughly enjoyed this large-scale telling of the creation of Yellowstone National Park. From Lewis and Clark, to Custer, to Montana vigilantes, to an array of tribal leaders, to the explorers, trappers, and mountain men who kept “discovering “ Yellowstone, the narrative has an ample cast of characters spanning 100 years. The men who made the world’s first national park each came to life - their strengths, weaknesses, egos, perils and successes and failures. The many story threads often wander and diverge, but always eventually come together, filling in the big picture. The narration was excellent, plain spoken and precise. Fitting. Highly recommend this fascinating history.

Great companion to a visit to Yellowstone

I was really glad to find this audiobook during my first trip to Yellowstone & Grand Teton National Parks. we flew into SLC, and had 40hrs or so of driving total, in which I started and finished this book. I thought it really detailed, and overall fair in the dealing of controversial history between the settlers and the natives, and I learned a lot. If there was any criticism I could conjure, it would be that the author spent too much time on native/settler history/relations rather than the park history itself, but after finishing the book, I understand that the two are intertwined, and it was fascinating regardless. I loved that I could pinpoint the places that the author mentions as I had just driven through or hiked past the same certain areas of the park. Highly recommend.

If you are looking for a book on the natural history of Yellowstone National Park, don't buy this book. This one is for the hardcore history buffs. It's an extremely well researched book, incredibly detailed with a focus on the military and political history of the entire Yellowstone region.

Lots of interesting stories though, but all in all the book was a little tedious. Would not read again,