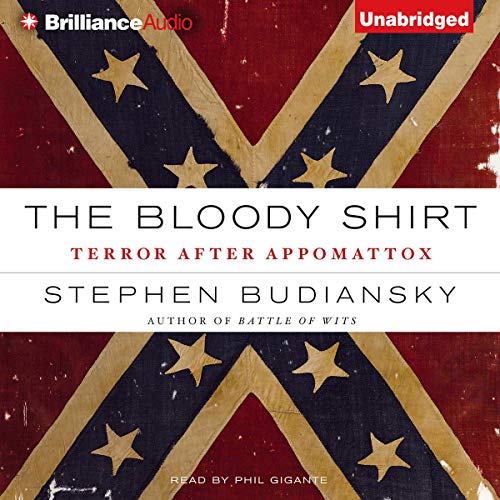 By: Stephen Budiansky
Narrated by: Phil Gigante
Try for $0.00

From 1866 to 1876, more than 3,000 free African Americans and their white allies were killed in cold blood by terrorist organizations in the South.

Over the years, this fact would not only be forgotten, but a series of exculpatory myths would arise to cover the tracks of this orchestrated campaign of atrocity and violence. Little memory would persist of the simple truth: that a well-organized and directed terrorist movement, led by ex-Confederates who refused to accept the verdict of Appomattox and the enfranchisement of the freedmen, succeeded in overthrowing the freely elected representative governments of every Southern state.

Stephen Budiansky brings to life this largely forgotten but epochal chapter of American history through the intertwining lives of five courageous men who tried to stop the violence and keep the dream of freedom and liberty alive. They include James Longstreet, the ablest general of the Confederate army, who would be vilified and ostracized for insisting that the South must accept the terms of the victor and the enfranchisement of black men; Lewis Merrill of the 7th Cavalry, who fought the Klan in South Carolina; and Prince Rivers, who escaped from slavery, fought for the Union, became a state representative and magistrate, and died performing the same menial labor he had as a slave.

Using letters and diaries left by these men, as well as startlingly hateful diatribes published in Southern newspapers after the war, Budiansky proves beyond a doubt that terrorism is hardly new to America.

"Budiansky brings the unpleasant details of the era alive in a smoothly written narrative." ( Publishers Weekly)

What listeners say about The Bloody Shirt

I can only assume that the previous two reviews of this book were written by people still in denial over the southern reign of terror that followed the US Civil war. This book is a riveting account of that era in American history that has been washed from the brains of most Americans. The dramatic reading of the writings of actual participants only heightens the enjoyment.

If you have the guts to listen to Americans participating in ethnic cleansing of the blacks in the south, you will find this book facinating. And perhaps wonder why you never read about it in your high school history book!

I thought the topic would be interesting especially in light of so much talk about reconcilliation in Iraq. I thought it would be instructive to read about the difficulty of healing our own deep cultural wounds. Instead this book is one repition after another. The reader does not help by his phoney, sterotypical southern accent whenever narrating a southern point of view and innocent, bewildered mode of speaking when narrating the northern senitment. The book is only caricature and vauderville.

Chapt. 29 - Read the text of The Mississipi Plan. It was probably influenced by the French Revolution, and affected so much of the future of world history, and yet it isn't discussed. There is a reason Woodrow Wilson, who was part of it in his teens, is mentioned in Mein Kampf. It's "Rules for Radicals" on steroids. That's just one reason this book is a valuable read. Another would be the untold success of State Gov's run by illiterate former slaves early on. But there is no more hateful arrogance than that of someone who has owned another human being, especially when they find they are thrust into equality with their former chattel. This book gives you scraps of a history almost erased from our books, and may yet disappear.

Not boring but has some extraneous detail from the primary sources.

An incisive and deeply disturbing story of domestic terrorism carried out by the KKK and similar groups which were staffed by Confederate soldiers and officers during Reconstruction. Thousands of Americans were killed, tortured, raped, imprisoned and had their inalienable rights taken away. We all knew reconstruction was a mess but this paints a bleak picture of the reality of these domestic terrorists. This is not some poorly researched opinion piece, the materials were gathered from the state archives of Mississippi, Alabama and South Carolina and show very clearly the intent, desire and hope to suppress the right to life, the right to vote, the right to assemble, the right to bear arms, and the right to express oneself freely. Clearly this domestic terrorism turned the victory of emancipation on its head when the government was unable to enforce its own laws.

It’s also a startling description of media control by anti-American elements in the South. There was no disputing the acts that took place, they were documented and admitted freely and proudly by the participants. Unbelievably and much like al Qa’ida and ISIS, they enjoyed what they did to fellow human beings and sought religious and civic leaders to back them up. Many were happy to do so. Like the Nazis and Communists in Europe, Asia, the America’s and elsewhere, they wanted to disarm, defeat and destroy anyone who challenged them legally, morally or civically. And they were highly successful. What was so surprising was that that their sense of righteousness was offended when their acts of murderous terrorism were discussed. In other words, they did not dispute what happened, they were mad people MENTIONED their traitorous acts. What an evil mentality.

This book tells that story very well. What is also highly interesting is that Budiansky presaged the recent political trolling of today. It is very clear (and equally sad) that the Russians were able to massively influence, direct and even exert some control over the same sense of victimhood still felt in the South today. Today the same dupes are conducting themselves in the same manner as the KKK has always done. Budiansky, to his everlasting credit, unveiled this mentality ten years ago in a brilliant but depressing story that continues to haunt our country to this minute. This is a must read. You will see the parallels between them and now and your eyes will be opened and your heart and soul will be filled with sorrow for the victims but also for our country.

Could not get through it. Painful and boring