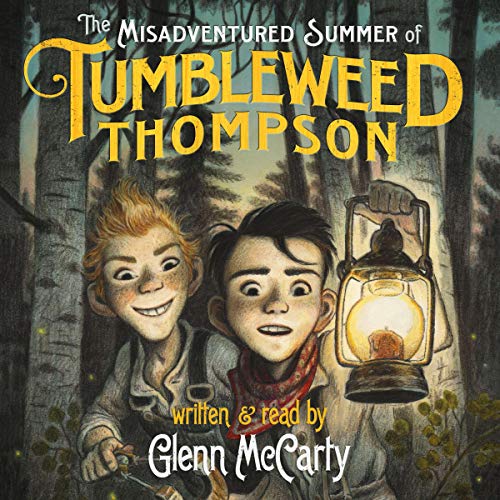 The Misadventured Summer of Tumbleweed Thompson

For Eugene Appleton, the summer of 1876 in Rattlesnake Junction, Colorado, promises to be just as sleepy as the ones before, his only excitement provided by the pulse-pounding dead-eye Dan adventure novels he devours. But Eugene's life takes an unexpected turn with the arrival of Tumbleweed Thompson, a gangly, red-haired boy who spins yarns about whaling voyages in the Atlantic and hidden stashes of gunpowder. Drawn into Tumbleweed's orbit, Eugene soon finds himself chasing smugglers, firing rifles, and competing for the attention of the lovely Charlotte Scoggins.

The pair's innocent mischief takes a serious turn when they stumble across a sinister plot hatched by the infamous Clean Shave Gang. Soon, Eugene and Tumbleweed are smack inside the middle of a twisty plot lifted from the pages of a dead-eye Dan book. They've learned a lot from each other's friendship. But will it be enough to thwart the Clean Shave Gang's plans?

The debut novel from Glenn McCarty The Misadventured Summer of Tumbleweed Thompson is a wild and woolly tale that's classic Americana for a new generation.

What listeners say about The Misadventured Summer of Tumbleweed Thompson

A generous, hospitable, hopeful story that will delight and charm children fortunate enough to read it...Lovely, hilarious, and beautiful!

Loved listening to this book with my children ages 8, 6 and 4. They didn't want the story to end. Great book with adventure, bravery and standing up for what is right!

My kids (ages 5, 6, 8, 9, 11 & 12) and I all enjoyed this wonderful story. We switched back and forth between reading and listening to the audiobook. the story pulled us in and we laughed out loud at Tumbleweed's antics. Great lessons in friendship, justice, and standing up for what's right.