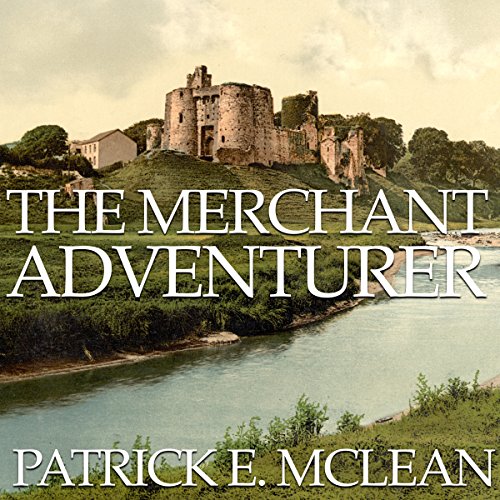 An ordinary, money-grubbing Merchant struggling to make a coin off penniless, incompetent adventurers is forced to take on the impossible quest of saving his town and rescuing the woman he loves from a treacherous and powerful Wizard. A battle of wit, wits and haggling that is part homage to, part skewer of the richly worked and often overwrought fantasy genre.

What listeners say about The Merchant Adventurer

This book is part epic adventure fantasy and part tongue in cheek pointed humor at the often overdone fantasy tropes. Our main hero, Boltac the Merchant, is, indeed, a very reluctant hero. However, eventually, against his better nature, he is forced to join the adventure, outwit the bad guy, rescue his lady love, and bring prosperity to his home town. Or something along those lines. Really, Boltac is just focused on one thing: not letting his lady love know he actually has a soft spot for her.

One day a would be hero, Relan, strolls in to a shop wanting to purchase a sword so he can gallivant off to rescue his lady love. However, he doesn’t have the coin for it. So he asks to lease out a sword. Boltac rolls his eyes and eventually clouts Relan over the head and drags his unconscious body outside. But then the minions of an evil wizard (Dimsbury) and his side kick (Raddick). The owner of the local tavern, and secret sweetheart of Boltac, is stolen away. Now Boltac must make some tough choices.

The humor permeates this novel and is often of the skeptical variety. Boltac questions nearly everything, even if it is just in his head. He’s always weighing the choices, adding the coins, calculating what’s in his best interest. Relan is great sidekick for him, being so idealistic, so naive, so honorable. Boltac is constantly having to rein the young man in, and not always teaching him the ways of adventuring. The back and forth between these two is most amusing!

There are a few ladies in this book. I can think of two off the top of my head. There might have been a third. One is a supposed damsel in distress that is working with a group of folks running scams. The second is Boltac’s secret love, the tavern owner. She’s smart in her own right, taking charge of her actions and formulating a plan to escape from the first moment. However, we spend little time with her. The author shows he can write female characters, and yet he had so few in this book and gave them small, tiny roles. I hope his other books make better use of the female gender, as I fully intend to seek out more of his work.

Then we have the bad guys. They come in two flavors: ruthless and deserving of death and then we have the orc servants (like Samga the orc leader) who would probably have fairly quiet lives if left to their own devices. Raddick is vicious and enjoys killing for the sport. Dimsbury is the brains behind the evil duo and is quite ruthless in his own way. These potent villains make great adversaries for the shrewd Boltac and the idiotically heroic Relan.

All in all, I really enjoyed this book. It strongly reminded me of the days when my man played Dungeons & Dragons weekly and he come home in the early dawn hours, smelling of stale pizza, one too many energy drinks, and cigarette smoke, babbling about his exploits in a some dungeon or medieval forest. This book was like that, but far better since it was a coherent story and not just disconnected ramblings by a man who was obviously dead tired but too wired on caffeine to sleep.

Narration: Patrick McLean narrated his own book, and I always have a few worries when I see an author narrating his own work. But have no fears here! McLean does an awesome job of narrating this book. He has a perfectly shrewd and skeptical voice for Boltac, a wonderfully dense and optimistic voice for Relan, and a serpent’s treacherous sneer for Raddick. I also enjoyed his ‘I’m way too smart to deign to chat with you’ voice for Dimsbury. And don’t forget his toothy voice for the orc Samga. It was a most excellent performance.

What is a hero made of. Maybe heroes are made not born. Don't trust anybody.

It's always wonderful when you get a sense that the writer really enjoyed the story they tell. A fantastic listening experience happens when the performer enjoys the story just as much. I've been sometimes disappointed when authors perform their own work, but in this case it's IMPOSSIBLE to imagine anyone else doing justice to this slanted tale of wizard and magic and adventurers and the occasional damned damsel in distress. I'm hooked.

I liked the story it was a easy listen though there were two audio mistakes of reading the same three words twice, I think I would love to here more stories of this band and world.

Patrick E Maclean is a very talented author that you can't help coming back to. I first heard him when he was doing the How To Succeed in Evil podiobook. I have honestly listened to that series at least 10 times they are that enjoyable. His other works are just a well written. Dry humor, narrated well, and all worth the listen. You won't be disappointed.

a hero of circumstance

If the NPC saved the world....

I would definitely recommend this to a friend. The book has the perfect balance of parody of your typical "high fantasy" novel, video games and tabletop games and having a great well written story. And Patrick Mclean's humor and performance really nails it down.

What was one of the most memorable moments of The Merchant Adventurer?

There are some great moments later in the book but are spoilerish. The whole interaction between Relan and Boltac in the beginning of the story is highly entertaining. A stalwart youth trying to rescue his love versus a jaded master salesman.

What about Patrick E. McLean’s performance did you like?

He does really well with making unique character voices and making them fit with the character themselves.


The moment towards the end of the book where Boltac has to make a decision to flee or to rescue his love. The way that it is written you can feel the struggle Boltac goes through.

A fantastic listen. The characters were engaging, witty, and even laugh out loud funny.

I listened to this on the way to and from work, and looked forward to this every day.

You won't be disappointed!

This was a fun romp!There is a quest,a lady in trouble!There is a wizard,and Orcs!Yes really,Orcs!With a lot of wordplay and sword(or mace) play,you should read this book.
Patrick E. McClean did a number of voices and did them well.
"I was provided this audiobook at no charge by the author in exchange for an unbiased review via AudiobookBlast dot com."