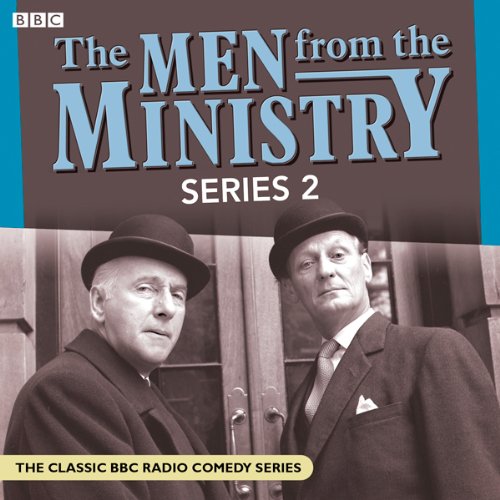 The Men from the Ministry 2

More classic comedy from the days when the Civil Service had a sense of humour. The Men from the Ministry were the hilarious radio forerunners of TV's Yes Minister, bungling bureaucrats who bungled for fifteen glorious years from 1962 to 1977. Muddling through were Wilfrid Hyde White, as the first head of the ubiquitous General Assistance Department, and the imperturbable Deryck Guyler, who followed him in 1966. Richard Murdoch was their faithfully incompetent Number Two.

Together they created absolute chaos - and an enduring and influential Whitehall spoof. Their potty exploits remain - in the inimitable words of the BBC announcer -'a tribute to the men of our Government service, those men who are sometimes compared to tea bags: they always stick together when they get into hot water.'

What listeners say about The Men from the Ministry 2

The men from the ministry.

The men from the ministry is a delightful comedy. Rather dated now but this adds to the sheer pleasure I get from both reminiscing and the gentle but very well written comedy. I never tire of listening to them.

Derek was better than Wilfred Hyde White as number one. You just could not fault his performance. W.H.White was good but Derek G was just better.