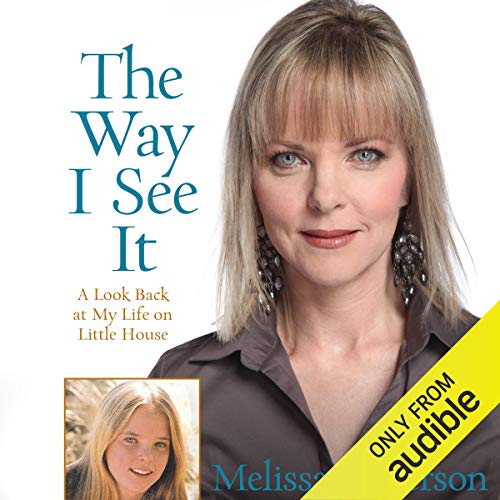 The Way I See It

By: Melissa Anderson
Narrated by: Jane Pfitsch
Try for $0.00

When other girls her age were experiencing their first crushes, Melissa Sue Anderson was receiving handwritten marriage proposals from fans as young as, and younger than, she was. When other girls were dreaming of their first kiss, Melissa was struggling through hers in front of a camera. From age 11, in 1974, until she left the show, in 1981, Melissa Anderson literally grew up before the viewers of Little House on the Prairie.

Melissa, as Mary, is remembered by many as the blind sister - and she was the only actor in the series to be nominated for an Emmy. In The Way I See It, she takes listeners onto the set and inside the world of the iconic series created by Michael Landon, who, Melissa discovered, was not perfect, as much as he tried to be. In this memoir she also shares her memories of working with guest stars like Todd Bridges, Mariette Hartley, Sean Penn, Patricia Neal, and Johnny Cash.

In addition to stories of life on the set, Melissa offers revealing looks at her relationships off-set with her costars, including the other Melissa (Melissa Gilbert) and Alison Arngrim, who portrayed Nellie Oleson on the show. And she relates stories of her guest appearances on iconic programs such as The Love Boat and The Brady Bunch.

Filled with personal, revealing anecdotes and memorabilia from the Little House

What listeners say about The Way I See It

Unless you want to spend your money and time listening to how successful, beautiful and what an amazing actress (despite what she calls bad or silly episodes) she is, then don't waste your money. She talks very little about LHOTP and more about how people always complimented her color of eyes, how well she was able to pull off being blind and how she became the most successful person from the show. I was VERY disappointed in this book. Spending your money on Allison's (Nellie) book The Prairie Bitch is so much better than this one can ever wish to be.

She just literally retells the stories of the episode's she was featured in. Very little else. Very strange. And she says nothing of her mother or her family off screen and nothing about Melissa Gilbert or Alison Armgrim as they both did in their books. Melissa and Alison both said that Melissa Sue was an unfrienfly, aloof weirdo and it looks like that were right!

doesnt stand up to other prairie memoirs…

too much plot review and not enough of personal experiences. I felt she felt obligated to write a memior, not that she had much to actually tell us about.

It’s a good thing it was being read to me otherwise I would’ve closed the book. She’s into name dropping, poorly written, she goes through episodes of little house because she has nothing else to say. She criticizes other actors like she is so much better. She criticized Michael Landon on how he directed. Not a nice person. Now I understand why she has the reputation she does. Don’t waste your time with this one.

It isn’t bad, but it is mostly her recapping her episodes of little house and her name dropping famous people she met or worked with. And then tooting her own horn how good of a actress she is. There is no talk of her relationships with other characters or really info on her life aside from what she acted. So disappointed overall. Allison angram aka nellies book was much better!

Terrible - can’t even finish it

Just terrible.
She retells scripts, without adding much.
Name dropping, ego-centric, wow...
Tells real world stories, as though they’re a script?!
No wonder this is free... sorry. First audio book I have ever not finished...

Could have lived without ever hearing this

If you’re going to write your own story, why not narrate it? I would have appreciated that. I liked hearing about the behind the scenes of LHOTP, but describing each episode practically line by line was totally unnecessary. It was also quite evident that she was jealous of M. Gilbert. She pointed out petty things. After all of these years, she should get over it.

it's more of a retelling of little house plots.

You will leave this book knowing nothing of Melissa Sue Anderson. Most of her chapters are scenes of Little House, literally line by line.

" The way the world sees me as a narcissist"...

The way the world sees me as narcissistic, is a more appropriate title. I stopped counting how many times she commented on her looks,it was gratuitous and disgusting. Nothing I hate more then name dropping. It means she can't stand on her own merit.
There was zero substance to the book, especially the parts about LHOTP. The narrator was good but its ridiculous it wasn't read by melissa. It's her book, her memoir. Then the main issue I had was all she did when it came to remembering LHOTP was to read Word for word, the actual script and only the scenes that were of her. And stated over and over how blue and beautiful her eyes were and, how amazing she was at being blind. Which is beyond narcissistic. Her ego is astounding.
She didn't talk about what it was like working with Melissa G or any personal relationship with her. Any relationship with Michael L or anyone else from the cast. (Except to criticize them) I knew she did when I was a young girl so 30 years ago. Her personality hasn't changed.
She should have wrote a memoir of her life and the people she knows in hollywood, after she was on LHOTP. Instead she peddles this garbage. Everyone knows she thought she was better then LHOTP and treated all her coworkers with disdain..she is very toxic and this Audiobook is a tiny example of it. She clearly used this as a cash grab as she has no other means for money and you can tell by the quality of her writing.
It isn't even worth a listen free...so please don't make the same mistake I did by giving it a chance. Unless you want to waste 6 hours of your life, it's your choice.

Mostly a play by play of Little House episodes

This was very well read but there was nothing much about the author's life. I've seen the Little House t.v. series, so I didn't need a description of half the episodes, I wanted to learn more about her life. I don't really feel I got that.

Nice easy listening and lovely insights into the Little House on the Prairie. Good narration.

Maybe I'd been a bit spoiled by listening to Alison Arngrim's astounding book Confessions of a Prairie B*tch (which I highly recommend, but save it till the end perhaps if you're planning on the Little House girls' trifecta of autobiographies - though I've not yet read Melissa Gilbert's) before this, but there's very little of true interest here - a handful of nice/sweet anecdotes and insights (I really loved the Spielberg story, more for the insight it provides into him than her) interspersed with bizarrely long descriptions of entire Little House storylines. The narrator does a great job with the voices etc but I can't help but feel the only thing that could've made this as intimate as I'd hoped would've been if Anderson had read it herself, it just overall doesn't entirely feel like her heart was in it.

A look back by an outstanding actress Melissa

Truly wonderful writing by very accomplished actress who captures each moment for you ....check it out