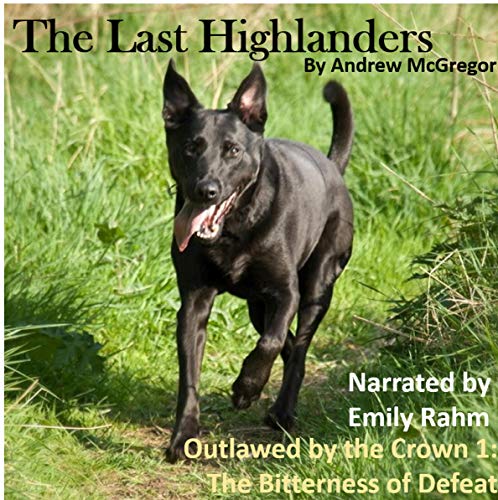 By: Andrew McGregor
Narrated by: Emily Rahm
Try for $0.00

During the turbulent year of 1745, the Jacobites struggled for the throne against a powerful and determined English enemy embattled in both France and on home soil. In the bitter and merciless civil war, one youth and his companion will forge a destiny.

April 1746: With the surviving Jacobites fleeing the victorious English Army at Culloden, one young man will emerge from the ruin of the Highlands and the vicious suppression of his people.

In the confusion and panic that ensues, they enlist the assistance of the last few surviving embittered Stuart loyalists as the English Redcoats surge forward unopposed...hunting, slaughtering or imprisoning anyone they suspect of collaboration with the Jacobite Standard.

Forging a strong friendship with one of the escaping Highlanders, the adventures of a youthful Scotsman and his dog across breathtaking landscape while evading capture and imprisonment can only lead to more and more remote and desperate hiding places as a high price is placed upon his head.

With steamy romantic entanglement and intrigue, collaborators, spies, French soldiers, and an overwhelming pursuing enemy hell-bent on destroying Highland resistance once and for all, the adventure and transition from a boy to a man is only just beginning.

A series of novels concentrating on one of the most exciting and formative times for the modern world. The stories will span across the Highlands of Scotland to adventures on the high seas, the European continent, and in the Americas.

Not suitable for younger listeners, as some scenes include sexual references.

The author aims to provide a thoroughly enjoyable and imaginative listening experience at an affordable price for the listener.

What listeners say about The Last Highlanders