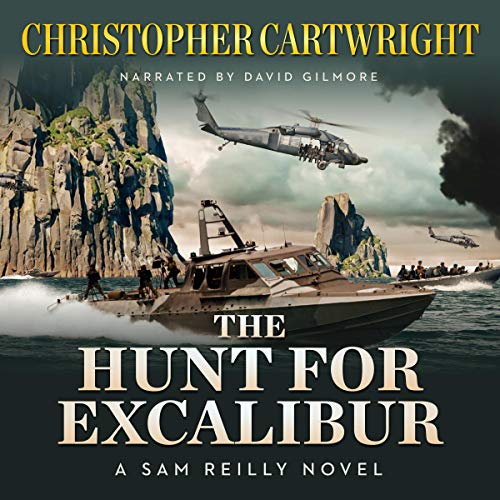 The Hunt for Excalibur

On March 11, 2011, the Japanese fishing trawler Hoshi Maru accidentally hauled up something deadly into its live-fish hold. The crew, having discovered their mistake, raced toward the harbor in the hope that they might survive. They never made it.

Presumed sunk by the tsunami that ravaged the coastline of Japan, its crew were declared dead.

Seven years later, the shipwreck washed up on Cannon Beach, Oregon. By the time the US Department of Fish and Wildlife arrived to investigate, people in the nearby towns had started to die in terrifying and inexplicable ways.

Sam Reilly will need to discover what really happened on board the Hoshi Maru – and why all clues point to the Legend of King Arthur....

What listeners say about The Hunt for Excalibur

Christopher Cartwright exceeded my expectations in The Hunt for Excalibur. I love how he meshes history with fiction, legend and myth with imagination, and makes it into a thrilling adventure. The character of Sam Reilly is endearing and compelling. I was totally engrossed in this book, and think this one might be my favorite so far. David Gilmore was excellent bringing the characters to life with his voice. One could hear the differences between them. He also inflects the right emotions. I requested this review copy audiobook and have voluntarily written this review. I will definitely listen to more books by this author and narrator.

I have listened to all 16 of the Sam Reilly books in this series so far, and this one is clearly my favorite. I think the biggest difference is thanks to a dog. Almost as soon as the dog was introduced I loved it, and I kept thinking to myself that I hope the dog stays on as a regular character (yes, character...read or listen to the story and you will understand). I also loved the interesting take on the story of King Arthur and Merlin.

I also like the narration of David Gilmore. Some have commented otherwise, but I find him to be a solid story teller.

I really only had two issues with the story...first, it is hard to believe that a brand new high-tech ship could be launched without a single problem, and it seemed to me that there should have been several characters with British accents, but Gilmore kept them as typical American accents.

Otherwise, I absolutely loved this audiobook.

I was given a free copy of this audiobook in exchange for an unbiased review.

The hunt for Excalibur

Another excellent tale of our friend Sam Reilly and hid 'friends'.This time he's looking for the sword from the stone.A stray dog turns out to be more important thn first thought.David Gilmore was a terrific narrator. I was given this free review copy audiobook at my request and have voluntarily left this review.'

This book was quite an interesting history lesson. I absolutely enjoyed the hunt for excalibur...

A big round of applause to Christopher Cartwright and David Gilmore

I found this audiobook to be a very good listen . It has a great combination of mystery, suspense and danger. The narrator does a great job of reading this book.

This story is wonderful. I love how Christopher Cartwright combines truth, myth and imagination into a compelling and highly entertaining story. I can't say enough how much I love this story. Each book can be read in whatever order you want but I've listened from beginning to this one and have yet to be disappointed in any of them. I can't recommend this series enough. This tale takes on Excalibur and not in a way you think. I love how the Sam Reilly books are refreshingly original and excellently written. The narration is superbly done by David Gilmore. He has spoiled me for this series. I love how he gives each character their own voices and emotions but he doesn't go overboard. Wonderful series, awesome narrator equals highly entertaining storytime!

I enjoyed it! The narration was good. The author does a good job with the characters. I look forward to reading the next book in this series. I was given this free review copy audiobook at my request and have voluntarily left this review.

The character is great, so is his team. I have enjoyed all in this series, yet I found Excalibur’s to be my favorite! Great read great story, excellent narration 😀

This is the first book of this series I’ve read. Got a free copy to leave an honest review. Good characters, great history, good action. The history was fairly well integrated into the story line. At times it felt like the book was dragging, maybe a bit too long. Great voice talent.

A great twist on the Merlin tails.

Not just a great book but an amazing series. When it cames to adventure books Christopher Cartwright must now be considered up there with the best of them.

A Man Made Monster Seeks Revenge.

What happens when to take a highly trained killer, a person who likes killing, then amplify the bad while removing the good through a project that goes badly wrong. Add into the mix several almost superhuman powers and that is what Sam Reilly and team must stop. Non stop action, great characters, superb narration, mystery and a plot with lots of twists and turns. Unputdownable, great listen.

I love Sam Reilly as a character. Not just Sam but all his team are really interesting characters.
This book was as good as they all are and it was also a little different. Usually we have the main focus on artifacts. This time its on a threat. An immediate threat/enemy. Sam is always something of a magnet for other interesting people and he remains so in this book. This one was faster than others with a great pace and lots of action as always. Less water action that other books which also made it feel different.

I'm a a big fan of Sam Reilly and this book does the character proud.
Jump in and enjoy!!

As usual the narrator makes this story very easy to listen to and get involved in. The story itself is interesting and exciting. It manages to bring in some real life stories as well as adding to some classic adding myths.
I shall continue to listen and enjoy this series