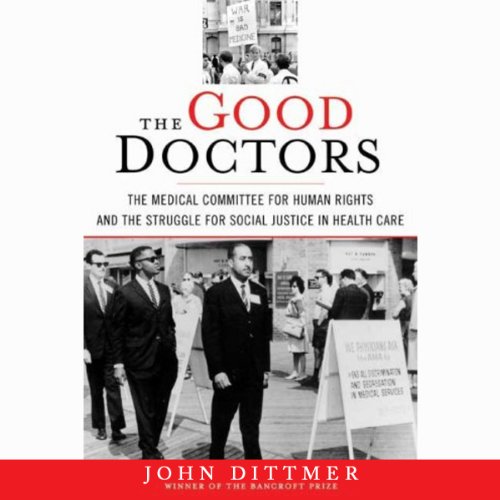 The Medical Committee for Human Rights and the Struggle for Social Justice in Health Care
By: John Dittmer
Narrated by: Justine Eyre
Length: 11 hrs and 45 mins
Categories: History, 20th Century
5 out of 5 stars 4.8 (6 ratings)

The Medical Committee for Human Rights was organized in the summer of 1964 by medical professionals, mostly white and Northern, to provide care and support for Civil Rights activists who were organizing black voters in Mississippi. They left their lives and lucrative private practices to march beside and tend the wounds of demonstrators from Freedom Summer, to the March on Selma, to the Chicago Democratic Convention of 1968. Galvanized, and sometimes radicalized, by their firsthand view of disenfranchised communities, the MCHR soon expanded its mission to encompass a range of causes from poverty to the war in Vietnam, and later took on the whole of the United States healthcare system. The MCHR doctors soon realized that fighting segregation would mean not just caring for white volunteers, but exposing and correcting the shocking inequalities in segregated health care. They pioneered community health plans and brought medical care to underserved, or unserved, areas.

Though education was the most famous battleground for integration, the appaling injustice of segregated health care had equally devastating consequences. Award-winning historian John Dittmer, author of the classic Civil Rights history Local People, has written an insightful and moving account of a group of idealists who put their careers in the service of the belief, stated in their motto, that "Health Care Is a Human Right."

I find it frustrating that the information in this book is not mainstream knowledge, taught in schools and taken into consideration as so relevant to today’s social struggles! I am a public health nurse and this book was so inspiring to me in my personal and professional life! We should all do more, be more!!! Thank you for this truth Mr. Dittmer!

I love learning all this

If you can get past the cynical voice of the narrator, this book is really remarkable. It really takes you back to the Civil Rights movement and to the epicenter of Human Rights and equality, not just in health care but for the country.