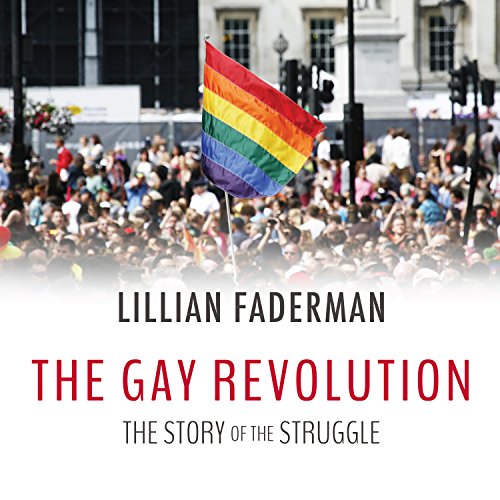 The fight for gay, lesbian, and trans civil rights - the years of outrageous injustice, the early battles, the heartbreaking defeats, and the victories beyond the dreams of the gay rights pioneers - is the most important civil rights issue of the present day. Based on rigorous research and more than 150 interviews, The Gay Revolution tells this unfinished story not through dry facts but through dramatic accounts of passionate struggles, with all the sweep, depth, and intricacies that only an award-winning activist, scholar, and novelist like Lillian Faderman can evoke.

The Gay Revolution begins in the 1950s, when law classified gays and lesbians as criminals, the psychiatric profession saw them as mentally ill, the churches saw them as sinners, and society victimized them with irrational hatred. Against this dark backdrop, a few brave people began to fight back, paving the way for the revolutionary changes of the 1960s and beyond. Faderman discusses the protests in the 1960s, the counter reaction of the 1970s and early '80s, the decimated but united community during the AIDS epidemic, and the current hurdles for the right to marriage equality.

"[T]his volume will deservedly become a standard in the field." (Library Journal)

What listeners say about The Gay Revolution

What did you love best about The Gay Revolution?

The Gay Revolution gives a great history of what the gay community endured at the turn of the century and into the present day. It gives the stone cold facts but presented in a way that is compelling to listen to. There were parts in this book where I seriously got angry and then there were other parts where I wanted to cry. The LGBT community has been through so much and it is wonderful in this book that the story is told.

I loved the facts. I love that someone actually looked up and told the story in a way that should have been told long ago.

What does Donna Postel bring to the story that you wouldn’t experience if you just read the book?

Donna Postel is awesome. I seriously could listen to her all day. When you think of someone talking about history you get this Charlie Brown sound in your head that it is going to be all boring and wha wha wha. But Donna Postel was not like that. She has a very pleasant voice to listen to and when I would listen to this story I stopped everything I was doing to listen.

In the first few chapters when it was told about the witch hunts for homosexuals. How we were put into mental institutions with the possibility of have a lobotomy. That struck such a fear with me. I was angered yet saddened at the same time.

Thi is a must read for people. Whether you are LGBT or straight this is a book that I think everyone should read. It is a very compelling story. And I really feel that you would be moved by this book. Donna Postel is great with her reading of this and is very pleasant to listen to. I learned things that I had no clue that had taken place. Everyone should read this book.

As a recently out and married gay man, I decided that I ought to know about the stories of those who came before. So, I bought this audiobook for a listen as I walked the Appalachian Trail.

This book blew me away. Faderman does an excellent job painting the social and political struggles that the LGBT community have fought over the last seventy years, all the way from the era of gay witch hunts in government and entrapment by undercover police officers to the momentous SCOTUS decision that legalized gay marriage throughout the land.

Faderman is a masterful storyteller who has done her research thoroughly. Every landmark case relevant the struggle is discussed, as are the tactics, tensions, and setbacks of the myriad advocacy groups as they fought for equal rights. I found this book to be so gripping as to have me hooked on every word for hours at a time.

The narrator, I think, did a fine job objecting emotion and character into her reading. I would listen to another of her narrations with no reserve.

As social histories go, this book is my go to. I intend to listen to it time and time again - we stand on the shoulders of giants.

An Important History For All

This history of the LGBTQ+ rights movement in America is compelling, honest, and deeply enlightening. While failing to adequately address bisexual and trans aspects of the story, it is a vital resource for everyone wanting to know the history. Well performed. Audible 20 Review Sweepstakes Entry

Informative book but hard not to be disappointed by considerable omissions of Trans activism. An encyclopedia of Gay & Lesbian history, but a Snapple cap of Trans history

This book leaves out all history of trans people and even uses trans history such as the institute of sexology in germany to leave no mention of trans people. It goes through decade after decade, excluding the T. I say this as a bisexual trans woman. This book is fantastic evidence for how the lgb and T are natural enemies.

I've read a handful of LGBT history books. As a book that follows in the footsteps of D'Emilio and others, this book does in general what so many of those others do in particular. It's an honest to goodness "page turner" that is nevertheless quite comprehensive (not much on transgender movement, but the title is GAY Revolution, after all).

Like all good histories, Faderman's weighty text doesn't forsake the trees for the forest. Lots of grainy details, not only about the likes of Harry Hay, Frank Kameny, and Larry Kramer but also of Brandon Teena, Matthew Shephard, Ninia Baehr, and the lawyers and antagonists (e.g., Anita Bryant) that were central or incidental to the struggle.

Most of my LGBT history reading is in sociolegal studies and legal history, e.g., Paula Cain, William Eskridge, Craig Rimmerman, Ellen Ann Andersen, Michael Klarman. That said, I'm confident there's enough here for the professional or lay historian, political scientist, lawyer, sociologist, and activist. At 30 hours of listening time (+600 pages in the print version), there had better be.

As with many gay histories, the experiences and voices of racial minorities are suppressed here. Faderman is clearly aware of cross sectional alliance between the gay movement(s) and the civil rights/black power movements, for example. And black and Latinx gay and lesbian activists (e.g., Bayard Rustin, Marsha P. Johnston, Sylvia Rivera) are given their due when a story (e.g., Stonewall) can't be told without them. But this remains a fairly whitewashed retelling.

Best historical perspective of gay history I have ever read. It is a long listen but done so well, it just makes you want to continue.

Awesome story of the history of LGBT community!

I had no idea about all of the hardships and struggles LGBTQ people went through.

The author gives a detailed history of the struggle for gay rights in the United States over more than half a century. She organizes her vast tale into logical story threads that are easy to follow, while still advancing the overall theme. Donna Postel’s narration is perfectly paced and engaging, and she voices the many well-known players who appear throughout with just a hint of their vocal characteristics, never crossing into impersonation.

If you are LGBTQ, then this book is a must read. We have such a rich history with trailblazers who paved he way for what we have today.