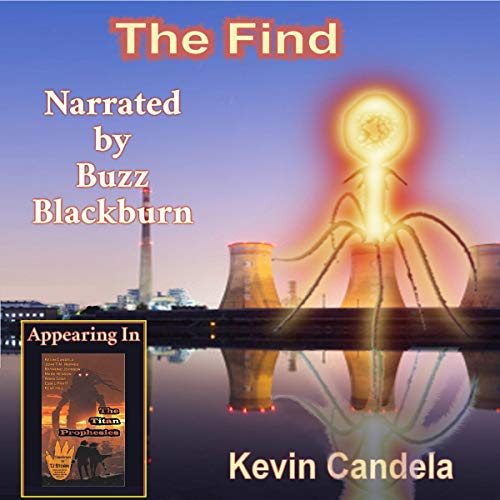 By: Kevin Candela
Narrated by: Buzz Blackburn
Try for $0.00

From the creator of the Krakenstein Trilogy comes a tale of mounting terror fueled by scientific curiosity, government secrecy, and U-238: When a geology student stumbles upon a bizarre little cube that absorbs incoming energy and defies dissection and analysis, it's passed up through the university to government scientists who can't get any further with figuring it out either. Incapable of solving its mysteries, they decide to expose it to a nuclear fission reaction...which is exactly what it's been waiting for. Absorbing the energy of that reactor, the thing manifests its terrifying final form - that of a bacteriophage-like titan that immediately goes on a rampage, draining the power from one nuclear reactor after another. Can anything stop it? Maybe. But at what cost?

What listeners say about The Find

The Find is a phenomenal trip back to my favorite sci-fi movies from the past. The book is imaginative and creative. This book may have only been an hour but it was well written and full of descriptive fun. I really loved the narrator Buzz Blackburn he help make this book seem more realistic. I want to read more from this author. I received this book per my request. I am leaving an honest review of my own volition.

The story was great and very entertaining. Buzz Blackburn's narrartion was superb. He really made the story come to life with his smooth, easy voice. Great listen.

The Find is outstanding science fiction. It has an interesting premise; it is fast paced; it is a good story. Perhaps Kevin Candela is the reincarnation of Isaac Asimov.

Sometimes thinking around the box is best!

After a geological student find a cute made of a mysterious material her teacher takes it back and put it in the Geo valve to be kept safe. That is until a government agent shows up and says CMOS third it over because the government is watching. He is wearing all black but he does it belong to the MIBC actually works for the national geological survey department. Little did they know they should’ve left well enough alone oh and by the time they wake the sleeping giant who is very hungry little do they know it is only a geology student who can help. This book was so so good my description is minimal compared to the greatness of this book. I loved the characters the way they got along I love the play on that men in black the whole book is awesome. It’s a plot I never would’ve thought of and didn’t know how it would end. It ended spectacularly. I loved it. If you like Star Trek or dark matter from Netflix you’re going to love this book although they are not as serious as a characters in that show it is the same type of been just IPA more brilliant.

A novella with a BIG novel's worth of ideas.

It's just an hour listen, but it's jam packed with big sci-fi concepts in line with "Pacific Rim" and Kaiju monster stories, and could easily be adapted into "Black Mirror's" biggest budget episode yet, lol!