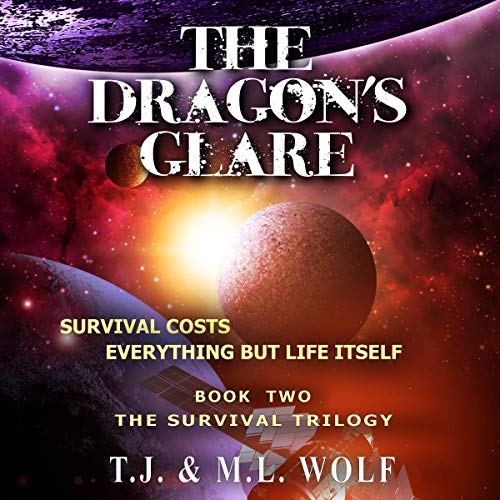 In 2019, three years after recovery of a powerful Hopi artifact from a mystery cave in Arizona, Una Waters finds herself on special assignment from D.C. to Chinatown in New York City. Unexplained acts of violence, including a cyber breach at the NYPD threaten to disrupt the lives of immigrants, forcing military intervention from General Ashcroft, now with U.S. Cyber Security. When newshound and compadre Jack Howser arrives to investigate a reported UFO sighting, Una begins to realize an episode of "missing time" at the Chinese New Year's parade may hold the answers.

Finally, an out-of-this-world encounter confirms Una's childhood beliefs in Sky People, hinting that our future lies in accepting the fact that we are not alone.

What listeners say about The Dragon's Glare

Strong Second Part Out of This World Excitement

Enjoying a China Town parade festival is, literally, out of this world for Una Waters on special assignment to check out a cyber attack in NYC. Soon she is teamed with familiar faces and a few new ones as weird attacks happen involving immigrants and Jack’s there for a UFO sighting. The connection between eastern and western mythologies, aliens and dragons, a prophecy, missed time, and everything in between has her people’s Hopi beliefs about the Sky People sounding more and more certain.

In the first book, A Gleam of Light, listeners are introduced to Hopi, Una Waters, US military general Colin Ashcroft, and reporter, Jack Howser, when a powerful Hopi artifact is recovered and Una reconnects with her people and her early beliefs. Now, Una has been back on her job in DC until sinister events in NYC have her assigned there. These three converge once again along with a hacker and others that help sort through what is really going on.

Like the first book, there are details building up the backstory and mysterious hints that don’t roll into the heavy action until mid-way through the book when the pace picks up swiftly though there is a feel of building tension even in the first half when ominous bits and pieces start coming together to make a forbidding sense to Una especially after she learns enough about Chinese mysticism.

Speaking of that, I was fascinated by the focus on Asian mythology in this one and, of course, the inclusion of dragons. It was interesting to see how the authors connected this into the existing world building they had established in an east woven with west.

I loved the further development and show of growth in the characters and particularly Una. She is coming into her own as a strong force for good and opening herself up to what is really going on in a sci-fi and mystical-ridden world. She realizes that she lost time during the Chinese New Year’s festival and then there are other odd events involving the Chinese ambassador and a gang. There is a prophecy that must be solved and the clock is ticking. The suspense built nicely as she and the others work together. The side romance element with Ashcroft was a nice part of it and wasn’t distracting, but folded into the story well. I was hoping this pair would work out.

Things stopped at a good place, but it is obvious that the world’s situation is still precarious and there is more to come.

The narrator, Kat Bohn, has a great storytelling voice and she makes it easy to slip into Una’s head and the world of the series. I liked how she voiced the variety of characters including the Chinese. I think she makes a good story even better.

All in all, this second leg of the trilogy was even better than the first and was full of action, description, and character development. Those who enjoy unique urban fantasy and sci-fi should definitely give this trilogy a go.