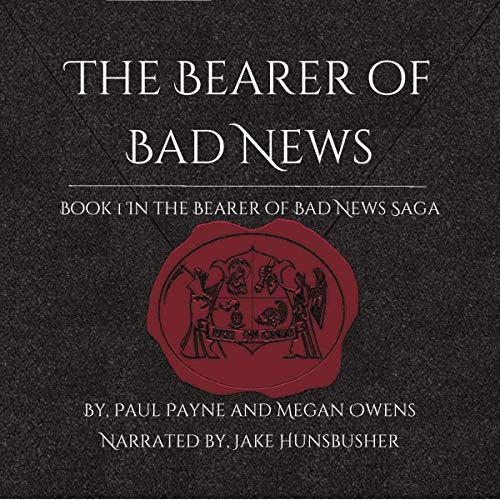 The Bearer of Bad News

By: Paul Payne,Megan Owens
Narrated by: Jake Hunsbusher
Try for $0.00

"Don't shoot the messenger" is a phrase taken very lightly throughout the World of Tor as the Bureau of Bad News continues to fuel its power by delivering terrible fates from its golden throne in the City of Trig. Anyone who receives such a letter, and is read out loud, will face a terrible demise, and so will the deliverer. These "Messengers" are considered bile as they travel to deliver such misfortunes, so why would James Roger Clemit volunteer for such a job? Be ready to be engaged in a swash-buckling adventure as James finds himself embarking on a journey of self-discovery, including swashbuckling combat, a Hunter with a death wish, trees that fight bears (and win), talking swords, and moose with Pegasus wings. While James cannot fully contemplate why he had been placed in such a world-altering position, a mysterious god notes that everything is going according to plan.

What listeners say about The Bearer of Bad News

Narrator brings the characters to life!

Interesting concept with some predictable outcomes. I do feel that the narrator makes this story more interesting with the different accents he uses for the characters.

There is a lot of world building and you could feel the authors were setting up for a sequel. I'm interested to see how James' story continues....

Disclaimer: I received a free copy of this book, but the opinion above is entirely my own.

enjoyed this funny story. had some good laughs. poor miss ronnie though 🤣 lol she is so misunderstood

Imaginative and Mischievous! A fun must read!

The Bearer of bad news is the kind of fanciful story that induces laughs, but that doesn’t make it any less engaging. The characters are overflowing with personality which adds to the stories whimsy and surprise. It’s a stunning, audacious book with a fresh feel on lore and world building. Can’t wait for the next book.

I won’t drink the gasoline... today!

Was a very interesting story backed up by an excellent voice actor. Will be buying volume 2.

A Bit of a Slow Burner

Over all I enjoyed this one, it's different from what my library would say is my typical listen, but I'm glad I got the chance with this one.

The story is a bit...flat? I didn't come away feeling as though the pay off at the end was as big as it could've been. Throughout the story there are highs and lows but they don't necessarily deviate from the flat line too much. I felt that the first quarter to half of the book was quite fun whereas the rest didn't really catch up to the good start.

Considering this is part of a series, it's not a bad thing at all and I look forward to the next part; there are questions that need answers! I hope to also learn a little more about our protagonist as well, I feel that he could do with some more depth.

I enjoyed Jakes narration here, he does speak well, easy to listen to and he gives that little extra to apply accents and personality to the characters he's working with. My only gripe would be that the audio quality sounded a little tinny? Flat perhaps. But it doesn't affect the listen at all, it's probably more striking to me after coming off some of the bigger produced titles on Audible.

Side note on the narration - I loved the character of Frank! I got big time George W Bush vibes listening to him and it really brought the story and his personality to life!