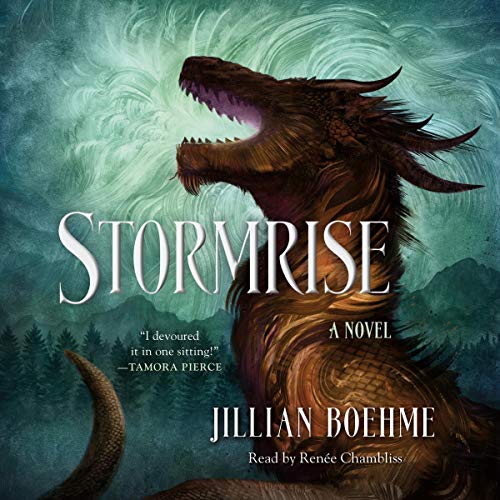 By: Jillian Boehme
Narrated by: Renee Chambliss
Try for $0.00

A combat warrior will risk everything to awaken the dragons and save her kingdom in Jillian Boehme's epic YA Fantasy debut, Stormrise, inspired by Twelfth Night and perfect for fans of Tamora Pierce.

If Rain weren’t a girl, she would be respected as a Neshu combat master. Instead, her gender dooms her to a colorless future. When an army of nomads invades her kingdom, and a draft forces every household to send one man to fight, Rain takes her chance to seize the life she wants.

Knowing she’ll be killed if she’s discovered, Rain purchases powder made from dragon magic that enables her to disguise herself as a boy. Then she hurries to the war camps, where she excels in her training - and wrestles with the voice that has taken shape inside her head. The voice of a dragon she never truly believed existed.

As war looms and Rain is enlisted into an elite, secret unit tasked with rescuing the High King, she begins to realize this dragon tincture may hold the key to her kingdom’s victory. For the dragons that once guarded her land have slumbered for centuries...and someone must awaken them to fight once more.

“A bold girl, a kingdom under attack, magic everywhere - I devoured it in one sitting! This book is one wild ride!” (Tamora Pierce)

“Stand aside, Daenerys Targaryen. Stormrise is a gorgeous, non-stop adventure that kept me turning the pages well into the night!” (Sarah Ahiers)

What listeners say about Stormrise

If you can make it past Mulan, its ok

So the first part of this book feels so much like the Mulan movie that you begin to cringe. However, its not completely bad after that. The book is a complete story....which is worth a star just for that. No cliffhanger endings or hanging plot threads....if you listen to it all, it is complete by itself. Could it be a series...yes....but marketing was left out of the decision.

Is it worth the credit? I don't regret it...but I wasn't happy either. I guess your mileage may vary.