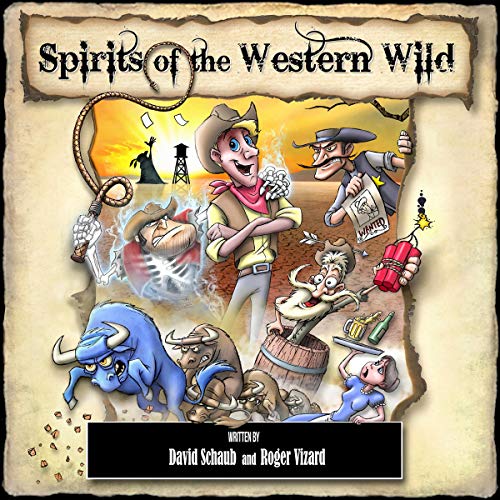 Spirits of the Western Wild

By: David Schaub,Roger Vizard
Narrated by: Full Cast
Try for $0.00

This paranormal adventure follows a young adventure-seeker and a curmudgeonly ghost bound together in a combative partnership that escalates to the comedic breaking point. Only by reconciling their differences are they able to defeat destructive forces working against them, and uncover the profound connections that weave their fates together.

This dramatization of the animated screenplay follows a young adventure-seeker named Luther McCleron on a westward journey to learn more about his grandfather. A series of fateful missteps take Luther far from his destination to a disheveled little town under the tyranny of a crooked sheriff named Big Willie.

It's here that Luther comes face-to-face with the legendary ghost of Monty: A curmudgeonly ghost who refuses to believe he's dead. Luther just wants to get back to his quest, but Monty thwarts his plans by using Luther to take out his vengeance on Big Willie.

Through a catastrophic string of events, Luther and Monty find themselves hopelessly entangled in a combative partnership that escalates to the breaking point. A mysterious book of premonitions, an ominous crow, and ancient Indian drive the mystical tone of this world; conjuring spiritual forces to help steer Luther on his journey through this western Twilight Zone.

All the loose ends resolve in a satisfying story of redemption, loyalty, and ascension while exploring the mysterious nature of fate and destiny. Was all of this a coincidence? Or are we guided by ancient “spirits on the wind” that nudge and steer us along our path to assure that we arrive at our intended destination in the end?

What listeners say about Spirits of the Western Wild

Entertainment for the Entire Family

Spirits of the Western Wild by David Schaub and Roger Vizard is a great audio dramatization and adaptation of a screenplay. As such, the entire story reads like a movie script, broken into sequences and seen from the director's point of view.

I started listening to Spirits of the Western Wild immediatly after I purchased it, in order to see if I liked it and to get the feeling for what is happening in this Western and I can tell you that, I was blown away by the excellent production. I always loved Westerns and I was listening to radio theatre long before I discovered the magic of audiobooks and full cast dramatizations.

Spirits of the Western Wild is a beautifully written adventure, with remarkable characters, vivid descriptions and a very interesting plot. We follow Luther, a young man looking for adventure, as he embarks on a train bound for the Western Wilds. When he finds himself stranded in a strange town, some very peculiar events starts to happen and mysterious things are put in motion. In our journey alongside Luther, we'll meet cowboys, a good and a bad Sheriff, train robbers, crazy people that aren't so crazy afterall, a beautiful bartender in a saloon, a Native American Indian with mystic powers and many others.

The audiobook version of Spirits of the Western Wild springs to life in the listener's mind thanks to a fantastic cast of actors that are giving their best for this dramatization. I listened to a lot of fully voiced audiobooks and I can say that this one is one of the more immersive narrative experiences out there. The production is enriched by a high quality soundtrack and expresive sound effects.

Glad I took a chance to listen to something new!

I usually stick to true crime and mysteries in my Audible library but I’ve been exploring more genres to expose my son to audiobooks he might enjoy. I came across the Spirits of the Western Wild and loved the cover art and story summary so I decided to give it a listen.

This book was such a delight! First I listened to it alone and loved it but then I heard it with my 11 year old son and it was like a whole new experience! He was so into it when we were listening he didn’t wanted to listen to the whole book at one time.

It's always so difficult to explain what captivates an audience when hearing a story like this but I’d argue this books sets the bar as high as it can go for a story of this kind! Each character is so well developed through the writing in addition to the highly detailed vocal personalities! If you close your eyes and listen you can see the plot play out in your mind. I hope someone makes a movie of this story!!! My kiddo has already asked to listen to it again.

Not only are the characters voices so well done, the sound effects and sound editing is flawless. It’s truly a full body and mind experience to hear.

Give this one a try, you won’t regret it.

I received a free copy in exchange for an honest review.

This could have been (and could still become) a motion picture. Reminiscent of American tall tales, this story is full of colorful characters, an intriguing plot that hooks your from the beginning, exciting music, and magic to stir the imagination. Perfect for young cowboys and cowgirls!

Really enjoyed the listen... Great sound effects, acting and narrative that make this audio come alive and enhance the story line which has a great mix of characters and action to keep you engaged throughout.
Well done.

A Fun New Look at the Wild West

I am a big fan of fully dramatized audio and it’s rare to find one as beautifully performed as this book. A combination of excellent audio performances and wonderful dialogue (like the spirit who tries to sound educated but keeps using the wrong highfaluting words) makes it easy to keep track of a large and dynamic cast. In addition there are great sound effects that heighten the sense of being there and really add some gusto to the visual descriptions within the tale.

The story is equally strong—a very cute coming of age story that was clearly focused on a younger audience but which I (at my more advanced age) found thoroughly enjoyable. I hope this cast will produce other audio books in the near future.

I received this book from Audiobook Boom in exchange for an honest review.

This was a very new experience for me. Not only did I enjoy the full audio/cast production (multiple actors, music, sound effects), but I was also given a link to the characters, backstory and snapshots from the accompanying illustration book. This was so cool!

The story was fun, fresh and I literally had no idea what to expect next. Our heroes of the day were an odd bunch (Luther, Monty and Jasper). Each had there quirks and the dialogue was original. Great short story for an afternoon.

I received a free copy of this audiobook from one of the authors. My review is unbiased and voluntary written and shared.

This is a fun and creative wild ride. Appropriate for both adults and children. It is easy to picture the events as you listen. I was voluntarily provided this review copy audiobook at no charge by the author, publisher and/or narrator.

Exactly what youd expect in a fun western brouhaha

You as the main character start out as a regular guy, and in this explosive journey you will take out a gang of train robbers.
Well, it aint easy at first, but you will get help on your way from quite an eclectic cast of characters including but not limited to 1 very crouchy ghost and the blue cow (or is it a bull?). I like the multicast book, especially since both female and male narrators do bang up jobs, and as far as shortness of the book - well it is longer than most movies and will give plenty of entertainment.
"This book was given to me for free at my request and I provided this voluntary review."

Spirits of the Weatern Wild sure is a wild ride! Plenty of action to keep the reader interested. The audio version is incredibly well made and was a blast to listen to, especially because it is a full-cast performance.

This audiobook was given to me for free at my request and am providing this unbiased voluntary review.

Kids will enjoy, but adults will ADORE this story!

I enjoyed every minute of this entertaining Weird West narrated screenplay! It had some masterful and mirthful misuse of common words and phrases; great old-radio sound effects; varied and descriptive voices, inflections, and narration; and an eerie and melodic Indian-sounding music soundtrack. How could you get better than this? I think some of the pop culture references might go over kids' heads (for instance, a Lee Van Cleef looking guy), but spaghetti western fans will love them.