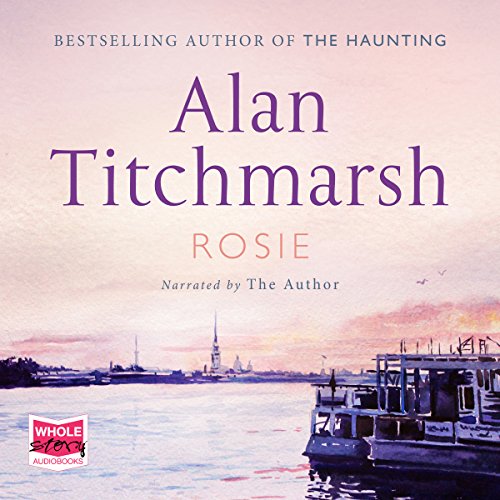 Alan Titchmarsh's sparkling new novel is a delicious blend of humour and romance and a resounding affirmation that there is no such thing as the generation gap.

The voice on the other end of the phone was severe.
'It's your grandmother.'
'Yes?'
'She's been arrested.'

Nick Robertson has become used to his grandmother Rosie's dotty behaviour. At 86, a widow now, she is determined that before life passes her by, she will live a little. Or preferably a lot. It wouldn't be so bad if Nick had nothing else to do, but with a job to find, two warring parents to cope with and a love life in terminal decline, he would prefer his grandmother to get on with things quietly. But, Rosie insists, there is no time like the present....

What listeners say about Rosie

Another well written love story. With a touch of laughter, joy, romance and sadness.
Alan Titchmarsh never disappoint me when it comes to love story. The twists and turns always amazed ms.Every time I write a review of his book. I often ask “Is he really romantic “?

Story with a twist

Alan Titchmarch narrates with a flow which is easy to listen too. His books are always well written. Having holidayed on the Isle of Wight for many years I was also able to easily visualise the places in the book.

Up to Alan’s usual high standards

Alan has a gentle but compelling writing style that works very well for an audio book. I would highly recommend his stories.

I so loved this book by Alan Titchmarsh!
Great plot and characterisation drew me in completely. I wondered, sympathised, smiled and shed tears as the story unfolded.
Beautiful storytelling and excellent, captivating and relaxing narration by Alan.


I love Alan Titchmarsh's books because I love the simple realism of his characters and stories. There is something so touching about his usually gentle, loving male main characters. They are not always male, not always gentle, but usually they are and they are so loveable, deep and interesting.

This story touches me particularly because it explores the idea that just because you are elderly and at the end of a lifetime doesn't mean you just slope off into a nursing home and die quietly and with as little fuss as possible.

That actually you can be loud and bossy and do loony things and have romances and be a damn nuisance to the fruit of your loins... because why not?

Nick is a quiet painter living idyllically on the Isle of White, has enough to deal with, trying to sell his paintings and recovering from the end of a three year relationship. The last thing he wants is to have to travel to the mainland to deal with the arrest of his Grandmother, who for reasons of her own has chained herself to the Russian embassy and refused to budge.

This is a beautiful story, about the end of one life and the reforming of another. It explores a number of relationships but above all it explores the relationship between an elderly grandmother and the only family member she can absolutely rely on.

It also deals with a quizzical, whimsical, old fashioned little girl who loves Jane Austen👌 and her mother, a beautiful, fallible young woman with a good head on her shoulders.

He narrates all of his own stories and his voice has the ability to calm me and pull me into the story. One of the people I recommended him to said he was too wordy, I picked up the book they were reading, started to read it and could only hear his voice. I had to explain that at best, if you haven't listened to him narrate his stories, relaxing and enjoying the experience, will negate the wordiness.

Alan Titchmarsh writes real stories with real characters and they will always tug at your heart strings.

Really enjoyed the story, with it's witty comments, humour and twisting story. Nice to listen to something gentle and loving. Thank you and enjoy!

Alan really can tell a good story. It was good old fashioned romance with a few twists. Loveable characters made it difficult to stop listening and there were even a few moments that made me blush. This is the third of his books that I have listened to and I won’t stop till I’ve heard them all.