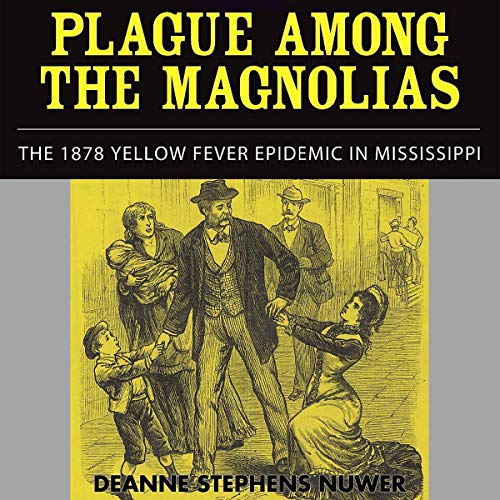 Plague Among the Magnolias

By: Deanne Stephens Nuwer
Narrated by: Cynthia Hemminger
Try for $0.00

Deanne Stephens Nuwer explores the social, political, racial, and economic consequences of the 1878 yellow fever epidemic in Mississippi. A mild winter, a long spring, and a torrid summer produced conditions favoring the Aedes aegypti and spread of fever. In late July New Orleans newspapers reported the epidemic and upriver officials established checkpoints, but efforts at quarantine came too late. Yellow fever was developing by late July, and in August deaths were reported. The fever raged until mid-October, killing many. Thought to be immune to the disease, blacks also contracted the fever in large numbers, although only 7 percent died. It is possible that exposure to yellow fever in Africa provided blacks with inherited resistance. Those fleeing the plague encountered quarantines throughout the South. Some were successful in keeping the disease from spreading, but most efforts failed. Yellow fever’s impact, however, was not all negative. Many communities began sanitation reforms, and yellow fever did not again strike in epidemic proportions. Sewer systems and better water supply did wonders for public health in preventing cholera, dysentery, and other water-borne diseases. Mississippi also undertook an infrastructure leading to acceptance of national health care efforts: not an easy step for a militantly states' rights and racially reactionary society.

"A detailed, thick description of events… Few books have depicted this disruption and panic as clearly as Nuwer’s account." (Bulletin of the History of Medicine)

What listeners say about Plague Among the Magnolias