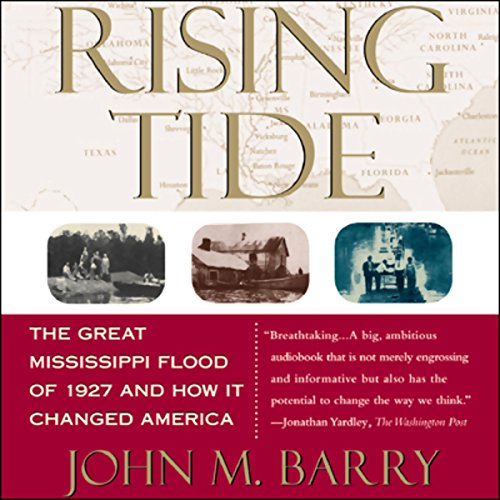 "It is a gripping narrative...Rising Tide stands not only as a powerful story of disaster but as an accomplished and important social history, magisterial in its scope and fiercely dedicated to unearthing the truth." (The New York Times Book Review)

What listeners say about Rising Tide

Where is the rest of the book?

Great topic and narrator but the abridged version is way too short! I would pass on this audiobook for the original version.

Great book but the unabridged version in print is much better. Still worth it. Good.

lessons from yesterday for today

I ordered this title because I grew up near Greenville, MS, and was curious what a comparative "outsider" might say so long after the fact.
I heard many tales of this flood, and the Percy family so key to this book was well known (believe a room in the local library was named for them among other items, and read Lanterns on the Levee in high school).
The reader does a good job.
A cautionary tale of scientific and engineering rivalry over flood control theory, and how it combined with having the absolutely wrong leader in place at a critical time. Those power struggles are timeless. As Katrina shows, they never DID get the flood control problems handled right. . .but the lessons go well beyond just the Mississippi River and who claims to control it.
Not preachy, and not dry. Truly well done.

I had no idea

I am 66 years old and have a fair education and a fair knowledge of American history. My parents were born in Arkansas, as were most of my relatives, although my family moved away long before I was born. Yet, Little Rock was always considered home. Still, somehow I knew absolutely nothing about this flood that changed the course of history. Recently, a cousin mentioned Granny, Granddaddy and their kids, including my father, had been evacuated from their home by boat during a flood. As usual, this particular cousin had all the facts wrong. They were not evacuated. She had the date and everything else wrong, except the fact there was a flood. I began to research and discovered this book.

This book not only tells the background of what led to the deadly flood, the how and why, including the political and economic issues that ripened conditions for the worse flood in American history, but also described what happened to American lives, the inconceivable racism, the corruption, greed, ambition, and the demons of human nature involved before, during, and after the flood.

The narration is well done, and John M. Barry's writing is descriptive and tells a complicated story in an understandable manner. For me, it was often too much to take in or absorb at times. I will listen to this book a few more times before I truly comprehend what happened, how it happened, and why it happened.

By the way, the Mississippi was not the only river to be involved. Although my grandparent's and their family did not evacuate, others along their street did. According to another relative, the Arkansas River only came up to Granny's back porch. To give you an idea, from the Clinton Library, in Little Rock, you can look across the Arkansas River and see where Granny's house once stood. Although, only the old pecan tree remains, and the street is now called
Brother Paul Drive, one can see how far from the normal riverbank the water had to rise.

Whether you are like me and are just now asking, "Wait, what? There was a flood?" or if you are well aware of The Great Flood of 1927, you will surely find this book to be an excellent resource.

Wish it was unabridged!

With so many natural disasters in the news lately, listening to the story of the Great Mississippi flood of 1927 was amazing. I just wish Audible would offer an unabridged version. The details are too interesting to skip over!

This book was suggested by a friend who was reading the hard cover version. When I ordered it I didn't realize it was the abridged version. Actually, it was just long enough. I got all the great stories and history of how the Mississippi river changed New Orleans and it was not too long and drawn out. It gave me a wonderful understanding of the political machine that shaped New Orleans.

Mixture of politics, race and engineering

I very much enjoy books like this that present the engineering wrapped inside an excellent study of the people and the politics of complex times. The reader is extremely talented and makes the book very exciting. The story starts around 1840 and leads into the 1930's. I was very fascinated with the story of the Percy family of Greenville MS and of course with the politics of New Orleans. The section that discusses the conflicts between EADS and Humphreys is also very entertaining.

A great story. Very interesting character development; plot development was well conceived. Some parts made you feel you were there. Recommended for history buffs.

It's abridged so some details are skipped from the actual book, but overall good and got the main points.

The author brings the reader's interest in right from the beginning, and paints a panoramic picture of the forces, both of nature and man, at play in this stunning event that altered national politics. It's sobering that we (and the media) are so unaware of the regular, catastrophic flood history of the region.