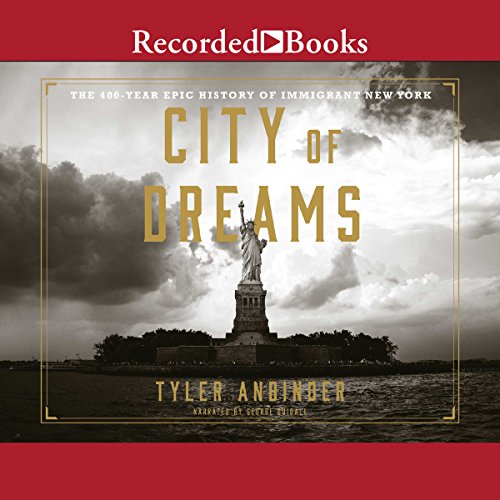 By: Tyler Anbinder
Narrated by: George Guidall
Try for $0.00

A defining American story, never before told with such breadth of scope, lavish research, and resounding spirit.

With more than three million foreign-born residents today, New York has been America's defining port of entry for nearly four centuries, a magnet for transplants from all over the globe. These migrants have brought their hundreds of languages and distinct cultures to the city, and from there to the entire country. More immigrants have come to New York than all other entry points combined.

City of Dreams is peopled with memorable characters both beloved and unfamiliar, whose lives unfold in rich detail: the young man from the Caribbean who passed through New York on his way to becoming a Founding Father; the 10-year-old Angelo Siciliano from Calabria, who transformed into Charles Atlas, bodybuilder; Dominican-born Oscar de la Renta, whose couture designs have dressed first ladies from Jackie Kennedy to Michelle Obama.

Tyler Anbinder's story is one of innovators and artists, revolutionaries and rioters, staggering deprivation and soaring triumphs, all playing out against the powerful backdrop of New York City, at once ever changing and profoundly, permanently itself. City of Dreams provides a vivid sense of what New York looked like, sounded like, smelled like, and felt like over the centuries of its development and maturation into the city we know today.

What listeners say about City of Dreams

Even as a history, not engaging

Would you try another book from Tyler Anbinder and/or George Guidall?

Even as a history, a book should be more than a collection of data or facts. I've given up on this audiobook. It left me flat. It wasn't written in an engaging manner or style. Facts and data are, to me, threads from which the author should weave an interesting story. This one took me nowhere. It didn't help that the reader or narrator seemed to me to have a halting style of speaking.

Has City of Dreams turned you off from other books in this genre?

I prefer non-fiction; particularly histories and biographies. I'll continue with books in this genre, and I'll avoid work by this author and narrator.

Narrator's voice would have been easier to take if it was warmer, friendlier and maybe more confident.

Having read a favorable review of this book in the Wall Street Journal, I had much higher expectations for this audiobook, and was looking forward to listening and enjoying it.
I don't feel good or satisfied leaving a review for a book I didn't finish, but I'm not going to invest another 20 or so hours to complete this, so I've given up, and I want to record my disappointment.

I loved this book. If you like NYC you will live this book. My only knock, is that the writer appears to have a bit of a political agenda aka anti-Trump immigration policies. That is an irritant and detracts from his fact-based highly informative and entertaining message. Regardless, I highly recommend it.

as a new yorker
it was an accurate and compeling tale. entertainingly told great read

America as a success story made understandable

History is made live in the telling of a great American story. Great book. 15th word required.

Probably a good book, but...

The reader reads this book so fast that he is impossible to understand. I would return it but I'm not sure if I can. The book seems very promising, but I suppose if I want to read it, I will have to buy a print copy (which I am unlikely to do, since I've already paid for it once).

Began to sound like a political tirade in the last chapters, which made it overall, very disappointing.

The reading is horrible, ruined a good book

I've finished more than 30 audible books, this is by far the worst reading, ruined a good book

One word sums this book Awesome. The depiction of the city was vivid. Every word read, painted a detailed picture almost as if I was there at that momentum time.