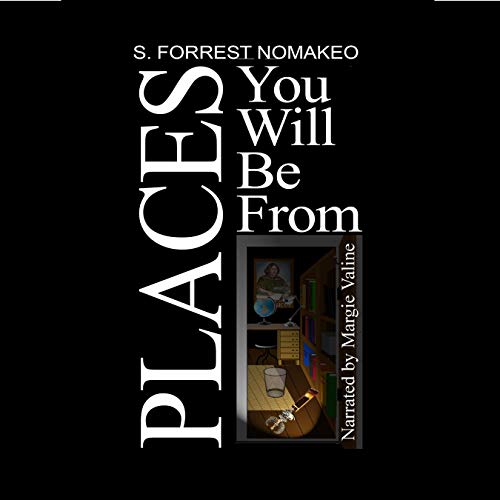 Places You Will Be From

By: S. Forrest Nomakeo
Narrated by: Margie Valine
Try for $0.00

A contemporary woman finds herself immersed in the body of a ninth-century runaway, after accidentally engaging the cyclic properties of the fifth dimension. She must find a way to survive and bide her time until a rescue can be arranged, or else, be lost to the ages.

What listeners say about Places You Will Be From

I have checked this audiobook from the Libary at least 500 times, so I decided to get it on audible. Even if you pay for it, it’s worth it. Anything by S. Forrest Nomakeo is worth buying.

I loved this story. I loved all of the characters. The time jumps. All of it!
If you love history, time travel, alternate lives, soul mates or past lives you will live this too.
Narration by Margie Valine was exceptional.
I was given this free review copy audiobook at my request and have voluntarily left this review

This was a great story that sounds a little complicated, but it’s very well done and easy to follow. The narration is excellent and I’m hoping it will be a series. I was given a free copy in exchange for an honest review.

PLACES YOU WILL BE FROM is a time-slip novel giving us a catalyst that actually makes sense: our protagonist, Ernestine stumbles across an ancient gyroscope in her professor’s closet that transports her back to the ninth century. The professor has been working on a “super string” theory in order to do this very thing, so the body switch doesn’t come out of nowhere. Oh yes, this is more than a mere travel through time; Ernestine finds herself inside the body of Poppa, the woman who is to marry Rollo, future Duke of Normandy. At least our heroine has a clue about what happened; fortunately, Ernestine was a student of history, so at least she had an idea what was going on. Poor Poppa, who finds herself in Ernestine’s body, is terrified beyond measure. And so we have a lively double story here, back and forth between Ernestine/Poppa from the past and Poppa/Ernestine in the present. But this isn’t all: when the professor tries to replicate the transference, he only succeeds partly. Poppa goes back, but poor Ernestine is only brought forward three hundred years, to invade the body of the future Genghis Khan’s wife, who again takes her place in the future. And a third time, Ernestine finds herself the wife of Peter the Great. At least she’s moving in the right direction! After the third transference, there is a delay while the slightly damaged gyroscope gets repaired; our third transplanted woman, Marta, is better equipped to deal with modern times, and she spends most of her time in the company of the solicitous Arnold, who bears a strong resemblance to her beloved Peter. This mutual attraction certainly gives Arnold pause; is he falling in love with Marta, or Ernestine?

Throughout, the author’s historical research shines, and we learn the customs of the time and country along with our heroine. At the same time, Ernestine has some deep philosophical questions that need answering: why was she associated with these famous, influential women? Was this a case of reincarnation? Why did she experience love for these dangerous yet caring strangers? Was Arnold a critical piece of the puzzle? This is a very lively expedition through time, and we will need to listen to part two before we get her answers.

What a fun time travel book exploring lots of interesting concepts! We had a great time listening to this 😊

Places you will be from

I enjoyed this book a lot! It was well written.The characters were real people that you liked or not.It was well researched. Margie Valine was a fine narrator. I look forward to more books from this author and hopefully this series.I find delving into the past to be exciting.Wouldn't we all like to live a day in an ancestors life? I was given this free review copy audiobook at my request and have voluntarily left this review.

This is a great story! I love the way the characters are portrayed and all the details that are included for every time zone.

An entertaining literary journey across time

Places You Will Be From, my first read from author S. Forrest Nomakeo. Reminiscent of Diane Gabaldon's Outlander or television's Quantum Leap, an entertaining literary journey across time. Narrator Margie Valine's voice made the 12-hour 30-minute tale pass quickly. I was given an Audible copy of this book and am voluntarily reviewing it. (RIP Marley January 20, 2014 - July 24, 2018).

Improved by the Narration!

Really imaginative, and the story was made better by the narration, which required many accents and also great depth of understanding of each character. I loved this book. Keep on!

I loved it! I love all of the author's audiobooks. I was upset the day of my flight I couldn’t find “awake” and ended up finding “you will be From the author audiobook in the O’hare airport in Chicago!!! I bought it right away I hope the ending of this story means there will be a second audiobook

A mysterious journey across time

Ernestine, a contemporary woman with a messy life, is hired to assist Professor Robert, an enigmatic expert in quantum mechanics busy developing the Super String Theory.
In the professor’s studio hid an antique spinning gyroscope that would project Ernestine into a journey across the time. She would find herself trapped in the bodies of famous feminine figures of the ancient past and women of the future to come.
The story moves backward and forwards in time, hinting at the fascinating idea of a continuum in the history of each person whose DNA goes back in centuries and will go beyond the present. ‘Years of evolution build our personal history,’ to say it with the professor’s words.
A captivating sci-fi that hooks the reader from the beginning. What I liked the most was the well-balanced blend of scientific theories, historic settings, and mysterious events.
Places You Will Be From was my first read from author S. Forrest Nomakeo, but I think I will read more by her.