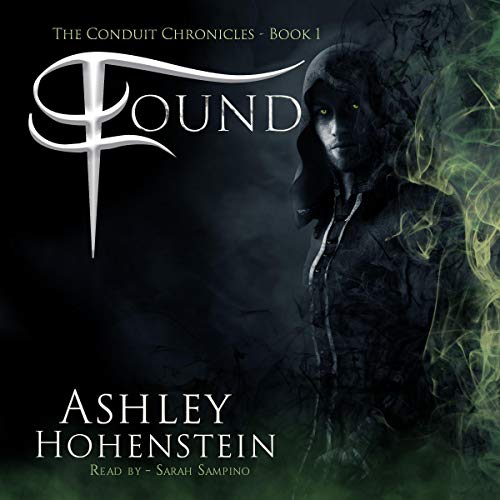 By: Ashley Hohenstein
Narrated by: Sarah Sampino
Try for $0.00

She’s always felt cursed. He’s being hunted. The prophecy foretold their encounter would change the fate of the world.

Ophelia is cursed with the ability to unwillingly siphon the secrets and emotions from everyone around her. But after a chance encounter with a stranger, she discovers she’s part of the powerful Conduit world, where gods and monsters are frightfully real, and her "curse" is actually her gift.

Elias has been hunted since his parents’ murder. Now, he’s the only one left who can stop the Conduit war that has been waged in the shadows of humanity for over 3,000 years.

Their meeting sets into motion a series of events divined in an ancient prophecy. What remains unclear is whether they are destined to be the catalyst for peace or the weapon that will annihilate the Conduit world and humanity as we know it.

Found is book one in Ashley Hohenstein’s Conduit Chronicles, an urban fantasy novel with a splash of romance. If you like Kevin Hearne’s Iron Druid series and the imaginative writings of Charlaine Harris, then you will love this fantastical thriller that weaves gods, monsters, and magic together into a brand-new world that you won’t want to stop listening to!

Buy this audiobook, and start this epic series, today.

What listeners say about Found

All the beautiful people

Narration is really outstanding, she does great with an array of characters. Story is good, definitely has potential to be a really good series. There's a large and diverse cast of characters, each with a good back story. I thought the love triangle really slowed the story down and is my only complaint. Both males are supremely beautiful, total ass kickers, and so on. Lead female can't decide and is torn. Move that along and this could be a really fantastic series. I know I'll get some unhelpful votes for saying that even though I did like the book, so just click away.......

This was definitely an interesting and quite an intriguing story. When it began I felt as though I had missed some background information or something, however as book went along and I got into the story I felt more comfortable with it. It certainly was a unique story and had my interest through most of it though I felt as though it dragged a bit in the middle and I was wanting more to happen at one point. Unfortunately I felt unfulfilled at the end of the book as it is definitely not a stand alone. The story does not end and it is necessary to go on to book two to find out what happens to the main characters. It was a well written story however and quite enjoyable and it definitely leaves you wanting to know what happens next. Sarah Sampino is an amazing narrator. She does a variety of voices almost to perfection and brings the story to life with her narration. I received a free copy of this audiobook and have voluntarily provided an unbiased review. #AudiobookObsession Reviewer 🎧

Found is a beautiful and descriptive fantasy romance. Despite the slow beginning, I soon found myself engaged and wondering. This was an enticing and alluring tale about a new supernatural world of powerful beings with incredible abilities.

Ashley Hohenstein is a wonderful author with a delightful imagination. Both the plot and characters were well developed and captivating. Sarah Sampino, is an exceptional and very talented narrator, with the ability to perform a broad range of accents. Despite the various characters, I could easily tell them apart.

Overall, Found was a fantastic listen, with great writing, plot and characters. Honestly, I can't wait for the second audiobook in the Conduit Chronicles.

I was given a free copy of this audiobook at my request and have voluntarily left this review.

First off I want to say I listened to this on audio and Sarah Sampino did an AMAZING job with this book. I have listened to her a lot and this is by far her best work. There are 9 or more characters with different accents and she really did a wonderful job with each of them! I could easily tell who was talking at any given time.

That being said I did struggle with this book for a bit. It was slow and boring. I am telling you this so you can hang in there and get to the good part. It does happen. Then this turned into an lively book. There were multiple characters to keep track of. They all had different abilities and the fun was trying to figure out what they were and how they use them. This also has a bit of a Love triangle going on. I enjoy the push and pull off of these two men.

This is my first book by this author and it engaged me after a point. The idea of the castle was so imaginative! Very Harry Potterish! By the end I am eagerly looking forward to more.

story was boring and the narrator sounded like they had a lemon drop in their mouth. or maybe three.

I thoroughly enjoyed this book! Now I am going to start on the second book in the series, I can’t wait to see what happens next!

I absolutely loved this book! I am elated that there are more books with this juicy context in this series. The author is fantastic at expressing the emotional state of her characters as well as providing a graphically enticing ambiance.

I loved this fantasy book for the way it took things from mythology and turned it into something modern. It was a fun twist. The story is action packed and full of tension, both personal and plot based. I highly recommend the book, but the narration and jarring noise between segments was enough to make finishing difficult.

I can't wait to read the rest of the series. this book kept me on the edge of my seat!

This is the first book I have read/listened to by this author and I have book 2 waiting in my queue. Good thing too because I found I wanted to hear more when I got to the end of this book.
The book is broken down so the chapters alternate between Ophelia, Elias and Lucas. This helps round out the story because we see events from different perspectives. It also helps us learn the individual characters motivations and highlights misconceptions from others.
Ophelia has grown up unaware of her true abilities and the world of the Conduits. Elias was born into it and recognizes Ophelia for what she is. Lucas is Ofelia‘s best friend and roommate. Just as she is discovering her feelings for him she meets Elias. Their relationships only become more complicated from then on. Add to the mix Ophelia is learning that the gods and monsters truly exist and what she thought was an unfortunate ability is actually her power/gift.
The love triangle became a bit much for me but I see the point behind it.
This is the first book I have listened to by this narrator ( Sarah Sampino ) and I enjoyed listening to her. She uses accents when appropriate, and brings out each character’s personality with changes in inflection and delivery. I still got the feeling I was being read to but it was definitely an enjoyable listen.

There are no explicit sex scenes. There is a love triangle and implied desire but nothing is truly acted upon. The violence is not excessively described. There is swearing.

This story is a mix of slow burn and fast burns . It’s all about you finding your twin flame when you least expect it The character are well written and strong.
Heroine is Ophelia who is an empath. She absorbs other’s emotions and projects them as her own. Hero is Elias who needs to continue his fathers work after his father died.
He bumps into Ophelia and he knows that they are one. Fast forward almost 2 yrs , Ophelia is starting to get feelings for , Lucas . Things go bad for Ophelia and Elias knows he had to save her

Sarah Sampino Performance is good. Her voice is smooth and strong

Excellent first book - give me more!

This is a book which give us a great level of detail which the author can build on later in the novel to craft what is a very enticing world and a great premise for a book and series. It’s brilliant world building. I really like the depth of the characters. It also has a really great feel to the book. It makes the world feel normal even though it’s a sci-fi ish premise. I liked the pace of the book and it kept me interested and wanting more.

The main character captured my interest from the start which made it easy get to drawn into the book. I always know I’m enjoying a book when I stop the car when I’m driving and sit listening for longer. I totally did that with this.

I also really enjoyed the audio narration. It matched the work as well as being a great voice to listen too.