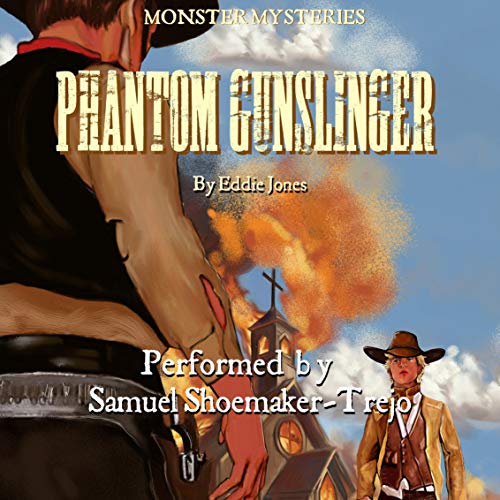 By: Eddie Jones
Narrated by: Samuel Shoemaker-Trejo
Try for $0.00

In Deadwood, you may lose your life. In Old West World, you could lose your soul.

Someone is coming for Nick - and maybe his sister and all the girls who ever helped him solve a case. When Nick, Wendy, and Kat get trapped in Old West World on New Year's Eve, Nick realizes someone is gunning for him. But who is this masked man, and why does he want to face Nick in a showdown on Main Street?

Chased by a psychotic wolf dog, Nick finds trouble at the Graveyard Gulch Gold Mine, tumbles into a crypt at Digger’s Undertaker, and becomes trapped on a train trestle with the Black Beauty's cowcatcher bearing down. With a group of teen girls hiding in the Holy Ghost Church, several of whom prefer Nick drop dead, he summons all the courage he has and flunks pew plate target practice. Out of options and time, he walks into town to face the mysterious man dressed in black.

Will he learn why the phantom gunslinger wants him dead before Nick leaves Old West World in a pine box? In this middle-grade mystery suspense, award-winning author Eddie Jones takes listeners on a wild Wild West ride to the peak of a snow-covered Georgia mountain. In Old West World, doing the right thing may leave you on the wrong end of a tombstone.

Complete the Phantom Gunslinger: Official Criminal Inquiry: Write a Book Report - Catch a Crook to see if you have the makings of a homicide detective. With this easy-to-follow "homicide detective" worksheet, you can fill in the answers to the questions while you listen. When finished, your book report should be thorough enough to convict a killer! Check out the book report questions on this page under the "From the Author" section.

What listeners say about Phantom Gunslinger