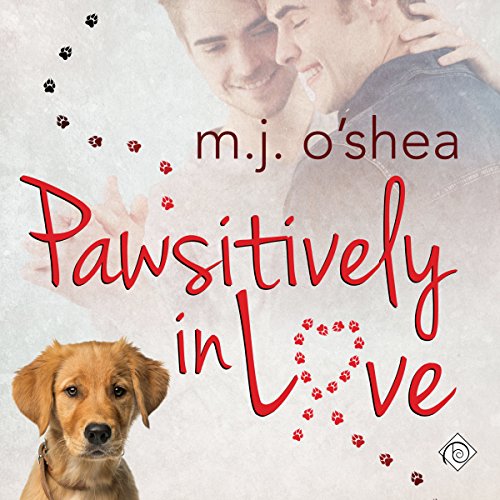 What Austin Lloyd lacks in academics, he makes up for in his love of the animals who frequent his pet salon. He's not lucky in romance, though, and his family would like him to settle down with a good man. Austin - and his golden retriever, Maggie - couldn't agree more.

Evan Partridge isn't good at letting people in. His messy family life and the past that's shaped him aren't worth bringing up. But his pug, Dexter, sure likes the pet salon owner.

Austin and Evan get off to a rough start, but being friends soon turns into something more. Unfortunately, Evan's secretive behavior nearly does the relationship in, and the budding love affair almost crashes and burns when Evan's troubled sister shows up on his doorstep.

Not speaking to each other is killing them both, but Evan doesn't know how to keep Austin and help his sister at the same time. He just knows he has to try. Winning back Austin's trust back, however, is going to take a whole lot of work.

What listeners say about Pawsitively in Love

Austin is an adorable Pet Salon owner who ends up making a horrible first impression on the buttoned-up professor, Evan.

With some well stated apologies the two agree to be friends and a fun and fast friendship develops with a side-dose of flirting.

Everyone loves Evan and Austin together, but Evan balks due to his past.

Eventually, Evan’s attraction for Austin can’t be denied and he gives in and life is wonderful for a few short weeks… then disaster strikes in the form of his sister. Can their fledgling relationship withstand all the ghosts of Evan’s past?

Man I loved the first 80% of this book SO MUCH! I was a little annoyed with Evan and his contradictory attitude about Austin – he gave so many mixed signals!- but when Austin calls him out on it – he reacted like a normal, good guy and voila I was over it!

The secondary characters are wonderful, the dogs were super cute and mostly I was diggin’ the hell out this until the sister came in.

I’m just not sure what the point was of adding in that layer of stress to their relationship. It felt unfinished and not nearly as polished as the rest of the story. The ending absolutely fizzled for me. It was definitely rushed and left me with a not very good feeling for our guys.

Maybe there’s a sequel? Some closure for both Evan and Austin as well as some really needed help for Della?

I really liked the sample of this narrator and the entire story did not disappoint. I think Marc Schindler had good pacing and intonation. He did a nice job with the emotion, was easy to listen to and there weren’t any sound errors that I could detect. He doesn’t do any different voices or accents – and that would have added a bit to the story, but it was always easy to know who was speaking. I think this contributed to my overall enjoyment and is a great way to experience this story.

It just did not work for me.

Austin is a sweet guy with slightly low self-esteem who falls for Evan, an emotionally closed-off guy. Evan's family life wasn't optimal, and his younger sister, Nell, plays a starring role in making his life more difficult with her wild mood swings and her constant need for attention. When Nell shows up on Evan's doorstep she makes life so difficult for Evan and despises Austin so thoroughly that Evan puts the breaks on the best thing that's ever happened to either of them. Then it's about pulling his head out of his ass and winning Austin back.

All that's basically in the blurb. Of course, not in those exact words. What I'm saying is I cannot blame the book. The blurb puts it all right out on front street. I knew going in there would be some kind of miscommunication or unnecessary drama and I honestly thought I was prepared for it.

I wasn't. I struggled. It just did not work for me.

As for the narration, Marc Schindler is a new to me narrator. I honestly found his tone and articulation didn't flow easily and made this a difficult listen for me. It took me almost a week to finally power through it.

Ultimately, I just didn't connect to the story, I loathed the Nell character, I felt like the ending was far too abrupt and unbelievable, and the narration didn't make it any of it better.

So if your looking for a fuzzy,happy, fun loving story, with some family drama thrown in, than this is it. Austin does tend to get his hackles up a little too quickly. And as far as I could tell, that really wasn’t explained, why he was so defense’s. But then again it really doesn’t take away from the story either.

Evan, as well has his own issues, well one BIG issue, his sister. Both of them have been each others everything, so when Evan leaves, Sis can’t handle it.

Evan and Austin have a rocky start, but find a balance and are charming to watch. Of course, like all good things, it needs. Mostly because guys have sharing insecurities.

My one issue, is I could have done less with the sister, although I understand she was a big part of the story, she was a big turn off for me.

As they muddle there way through this relationship we get the pleasure and sometimes the frustrations of watching them. We get to learn the why, when and how much’s. And yes, I did look up puppy pug pictures!

The narrator did an amazing job capturing the feelings and tone of this whole book. From the happiness, the snarky, and even the bitter sister.

It was a very sweet story. I really enjoyed the Performance!

It was a very sweet story. I really enjoyed the Performance! I will certainly look up this author.

Sweet with just a touch of angst

Pawsitively in Love is a cute new romance novel by M.J. O’Shea, author of Rock Bay, one of my favorite gay romance series. Although the title would lead you to the conclusion that it’s very light and entirely angst free, the book actually has several darker moments and a lot of issues for our two heroes to deal with.

Austin is a fantastic romance hero, open and earnest, with nothing to hide. He has a lovely family and a fantastic group of friends, and if he occasionally suffers from insecurity caused by his lack of education, he deals with it in good time. Despite owning a successful pet salon and being surrounded by amazing people, Austin is often lonely. When Evan first shows up, Austin reacts a bit strangely to the first person he’s been attracted to in a while and they end up in a series of ugly misunderstandings.

Unlike Austin, Evan is closed off and solitary. He has family issues that always come in the way of his relationships, so he simply stopped trying. He gets lonely, but dating someone is too much hassle when he knows it can’t possibly last. Austin is the first person to tempt him to change his mind. But when Evan’s sister suddenly shows up in town, Evan knows he can’t have a normal relationship and take care of Della.

I really expected a super light romance after seeing the cover and the title, but the actual story was a bit darker than expected. Evan’s family struggles with some serious issues and he’s quick to lash out at anyone willing to help. No matter how much he wants it, he isn’t ready for a relationship with Austin, not until he resolves some of his problems, and it leads to a lot of heartbreak for them both.

The narrator, Marc Schindler, did an excellent job reading this light, entertaining story. Sometimes the switches between the two points of view weren’t very clear and I had to struggle to understand whose thoughts I was listening to, but that had less to do with Marc and more to do with production. There should have been a longer pause, a chapter break or something along those lines. For his part, Marc delivered the story well, with a sure and pleasant voice. If you decide to read this, audio is a good way to go.

Overall, this is an enjoyable story with some (but not too many) heart-wrenching moments. I highly recommend it for a relaxing weekend read.

I wish it was longer. This was just what I needed after reading a very sad book (A Little Life).

I listen to A LOT of audiobooks and feel compelled to finish them all. This one, I just can't. The performance was like nails on a chalk board to me. The staccato rhythm and over articulation without a single note of emotion was painful. Sorry to say, this one did not even qualify as a "performance". It was akin to having a high school sophomore read aloud from a textbook.