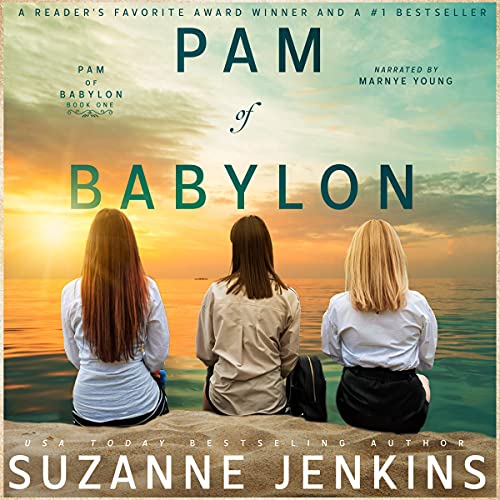 By: Suzanne Jenkins
Narrated by: Marnye Young
Try for $0.00

When Jack has a heart attack on the train from Manhattan, his wife and two lovers discover secrets and lies, and each other.

For Long Islander Pam Smith, happily preparing for the return of her husband every Friday night is a way of life, until she receives a dreaded telephone call that will change everything, forever. Three very different women - a wife and two mistresses - gather at the deathbed of Jack Smith, the man that connects them all. As they grapple with their loss, they come to know one another, realizing that the man they all loved was not what he seemed to be. Can they discover the whole truth about Jack and make peace with it, or is their trust in him already too deeply shattered?

What listeners say about Pam of Babylon

Wow! Listen to this book!!

I’ve bought the ebook and have never read it. Found an ARC of the audio and jumped on it. I am reading the ebook! This story has everything! A cheating husband, who it seems was involved in worse than that. He does and his widow, Pam is uncovering the secrets and trying to find her way. The mistress, Sandra, is in the same boat now that she has learned she’s pregnant with his child. His sister in law, Marie, loves him more than she should and exposes secrets that’s no sister or wife wants to hear or know. The shock factor was off the charts! I was laughing, crying and everything in between. This story is amazing! If you like books with a real story and not just them getting into bed, check it out!

Had my attention from the very beginning.

I thoroughly enjoyed the story and the characters were all very interesting. I never lost interest in the audio, it was well paced and the narrator was one of the best I’ve had the pleasure of listening to. The ending was perfect. I will continue on to the next book/books in this series. Can’t wait to see what happens next.

This was my first experience with Suzanne Jenkins' work and it was enjoyable. There were times I was surprised by the actions, the reactions and the emotions of Pam, the protagonist. I found the story fascinating and it kept me wondering what would happen next. I recommend this book to others and I'm looking forward to continuing the series. Marnye Young's narration is excellent and she keeps the attention riveted by her performance. I was given a free copy of the audiobook and I have voluntarily left this review.

A story brought to life

I really like that the story just flowed. I have been reading this series ever since the first book came out. The story itself is jaw dropping. From the minute you peek into the world of Jack, Pam and Sandra you are hooked. It reminds me of dark late night soap opera. I was so excited when I heard it was on audible. Suzanne Jenkins was kind enough to gift me a copy. I honestly did not want it to end. Jack and his secret life that opens little by little like Pandora's box. And they never stop. We get just a taste of his life in this book, it unfolds more and more in each book. My advice is be prepared to get sucked in and hold on tight. I loved the book and the audio gives it more dimension. Thank you Suzy for allowing me to take a walk again on the wild side. I'm looking forward to listening to all of the series.

I read all of the Pam books in the series and loved them but the audiobook is great. Martyr does such a great job bringing the characters to life. I was a bit skeptical because it is such an emotional read that I wasn’t quite sure how it would come across on audio. Boy did she prove me wrong. This is a must listen to book

A dead man had been keeping many secrets

I've had this book in my library for quite a while, but when I was given the opportunity to listen to the audio version, I jumped at the chance.

Jack dies on the train, on his way home to his wife, who lived full time in Babylon. Jack had just left his mistress in NYC. He lived there during the week to lessen his commute to work.

It turns out that Jack had many secrets and his wife Pam discovers that he had been sleeping with not one, but two women, and maybe more.

This is a great story about self discovery and the interactions between the wife, two lovers, and two mothers. Fascinating and I'm ready for the next book in the series. It's a great thing that there are 23 more books waiting.

The author provided me with a copy of the audio book. This is my honest review.

Pam of Babylon, my first enjoyable read from author Suzanne Jenkins. I originally got this book back in August of 2013 & never got around to reading it until I received a free Audible copy yesterday. I even own 80 of her books yet I'd never read one. Well-written with intriguing characters and a captivating, intricately woven storyline that makes you want to continue reading the 24 book series. “I received a free Audible copy of this book and am voluntarily leaving a review." The gifting of this book did not affect my opinion of it. I'll definitely be reading more from this author and look forward to the next book in the series, (RIP Marley January 20, 2014 - July 24, 2018).

So exciting to find the characters I've read a few years ago come to life!

When a book starts from a seemingly perfect place for the character, you know he is not going to stay there long… So when Jack Smith is looking at the face of Sandra, his mistress, thinking “I am the luckiest man alive,” his luck is at its end. Not only would Marie, his wife’s sister, find out about his affair, but he would to live long enough to try to handle the scandal with Pam, his meek, trusting wife.

While he is cheating on her, Pam waits excitedly for his return. “She had the week to prepare for his homecoming… she tried to make it an oasis for him.” Despite her trust in Jack, she knows intuitively that things between them are not quite right. “There was a tiny, itsy bit of doubt, a niggling worry, an insecurity in the back of her mind. He was disconnected from her.”

When she gets a call from the hospital that Jack has died from a heart attack, Pam goes to pieces and then, gradually, reassembles them, finding a new strength in herself. She now learns the truth about him and a few of the women with whom he betrayed her. Sandra, too, goes through grief: “Her life had changed overnight.”

This book is about looking forward to restart life already, even in the presence of death. It is about healing, part of which comes from forgiveness. I know this sounds strange to some readers, who find Pam’s behavior ’too unreal.” Apparently it is easier and perhaps more natural for many of us to succumb to vengefulness. At the same time, this is exactly why this book is so fascinating. It offers a different possibility, a more hopeful one. “There was something about cleaning up, washing everything, that spoke of new beginnings.”

The author, Suzanne Jenkins, stated that she wrote the character as the opposite of herself. “I am at the opposite end of the spectrum of reactions....I wouldn't be forgiving and embracing.” Yet I feel that by the end of the story Pam inhabits her to such a degree that her words come straight from the heart, gut, and mind.

Marnye Young blows life into the characters, giving each one a separate identity and allowing the writing to shine.

This was a strange one. The family on a whole is not a very likeable one and it is evident there are plenty of issues to go around. Saying that, I do know that not everyone deals with what life throws their way, as I would.
At first, I had empathy for Pam but also felt she needed a backbone. By the end of the book, I could understand where she was coming from and knew she would be okay.

I feel the family will need intense therapy but Pam will be fine.

The characters I really did not like were Jack, his brother Bill and their mother.

The book on a whole reveals the selfishness of rich people. I know this is a stereotype but the book plays it to a T.
If the remainder of this series is like this book, I’ll pass. I can’t stomach more spoiled brats trying to justify their experience. One book, I can tolerate but not a series of them.

I was finally able to listen to this great story!

I have had the books in the Pam series on my kindle for a while now but I always end up with so many books I need to read I never know where to start! After listening to this first book in the series I know I am going to have to carve out the time to read the books in this series. This story is very interesting and I just know that it is going to get better every book I read! I couldn't believe everything that was packed into this one book. You are definitely getting your money's worth! Jack is so much more than just Pam's husband but it isn't until she suffers a loss that she gets her eyes opened. My goodness there is so much suspense in this series opener! I just can't wait to dig into the next book and see what is going to happen with Pam, friends and family! This book is very exciting and I just loved it!
I received a free download of this book from the publisher. This review is my own honest opinion.