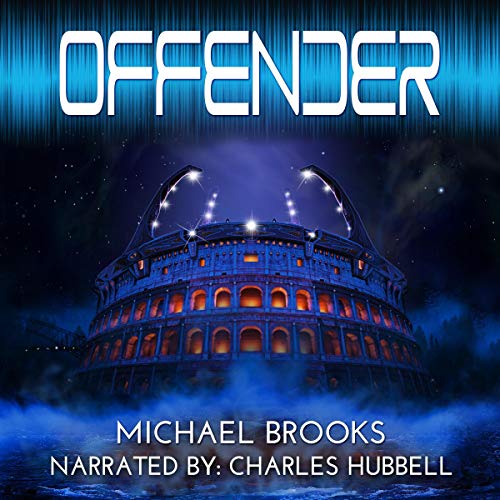 By: Michael Brooks
Narrated by: Charles Hubbell
Try for $0.00

Murder made him a prisoner. Truth can set him free.

In a distant future, all criminals of violent crimes are sentenced to life in the Arena where they must battle against both man and beast in a fight to the death.

When 16-year-old Calvin Sawyer is wrongly convicted of his father’s murder, his charmed life as the son of a senator is changed forever. He’s stripped of his rights, his humanity, even his name. Now as the property of the Arena, offender CS4521 must learn to fight in the colosseum. It’s kill or be killed.

“Murder, friendship, and lost romance in a tech-heavy futuristic world. Offender is everything we love about dystopian literature.” (Rebecca Rode, USA Today best-selling author of the Numbers Game Trilogy.)

“Edmond Dantes meets The Hunger Games in this incredible dystopian thriller. But Offender is so much more than a screaming roller coaster ride. Calvin’s struggle to stay true to his values and overcome the odds pierced me to the very core! I’m still reeling!” (Shauna E. Black, award-winning author of Rebel Bound.)

“Offender starts off at a run and never lets up. Full of action, heart, and excitement enough to keep any reader up late, you're going to have a great time fighting and racing along with Calvin on his heroic journey.” (Jarred Garrett, author of the Beat Series.)

What listeners say about Offender

Fast paced, distinctive characters, life or death stakes, if you liked Hunger Games this book is for you.