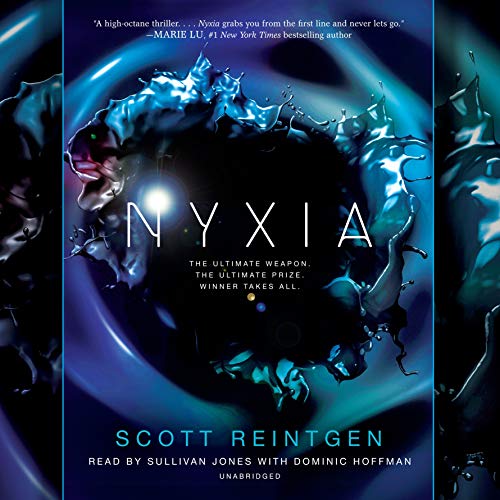 By: Scott Reintgen
Narrated by: Sullivan Jones,Dominic Hoffman
Try for $0.00

Every life has a price in this sci-fi thriller - the first in a trilogy - that has the nonstop action of The Maze Runner and the high-stakes space setting of Illuminae. What would you be willing to risk for a lifetime of fortune?

Emmett Atwater isn't just leaving Detroit; he's leaving Earth. Why the Babel Corporation recruited him is a mystery, but the number of zeroes on their contract has him boarding their lightship and hoping to return to Earth with enough money to take care of his family.

Before long, Emmett discovers that he is one of 10 recruits, all of whom have troubled pasts and are a long way from home. Now each recruit must earn the right to travel down to the planet of Eden - a planet that Babel has kept hidden - where they will mine a substance called Nyxia that has quietly become the most valuable material in the universe.

But Babel's ship is full of secrets. And Emmett will face the ultimate choice: win the fortune at any cost, or find a way to fight that won't forever compromise what it means to be human.

“The 100 meets Illuminae in this high-octane sci-fi thriller.” (Bustle)

"Both curious and suspicious at every turn, [Emmett] is an ideal narrator, and a sequel can't come soon enough." ( The Bulletin)
"Emmett's self-deprecation, wit, and ability to see the good in others will keep listeners riveted and eager for the next volume in this planned trilogy." ( PW)

What listeners say about Nyxia

Slow and too long prequel

Every universe (lore) has to be described to give the reader right perspective and to understand events and its mechanics properly. But this entire books felt to me as this introduction. I was not captivated be the drama. I did not care about the protagonists. I did not like first person narrative style. Only during last few chapters something interesting is finally starting to happen.

I thought the book and the narrator were awesome. I can't wait for the next book to come out to see what happens next. If you liked Red Rising and The Hunger Games, then you'll enjoy this book.

A sci-fi teen/YA book that is very exciting!

Nyxia
By: Scott Reintgen
Narrated by: Sullivan Jones, Dominic Hoffman
A very original sci-fi teen/YA book that takes 10 teens to outer space to meet aliens and mine a new element that is remarkable! The teens and their families are offered a fortune for going. As the story unfolds the reader finds out many truths about the mission that the teens didn't know at the beginning! Pretty awesome!
Narration is fantastic!

Two words amazing book. Anyone who like sci-fi book will want to read this amazing story

Start of a great series.

This is such a wonderful book. It's a young adult book but wow it doesn't fall into the tired tropes. Atleast not really. The story characters and pacing had me finishing it within two days. I could not stop listening. There was a issue of a love intrest being introduced in the 11th hour but other then that it's a perfect start to a series.

Gripping read from start to finish

Absolute must read. What a fantastic story. Can’t wait for book 2 and 3 and the journey on Eaden.

I probably won't read the second one...

I saw this was in a YA book box and the description sounded awesome, so I went for it. I was disappointed and finally got into this book (a tiny bit) about 2/3 of the way in. It took me ten times as long to get through than an audiobook normally would. It's hard to listen to while multitasking since so much keeps happening, but it also feels like fluff. I couldn't imagine what the writer was telling, not for lack of imagination, but maybe for a slight boredom, or feeling no relation to the main character. I am not the best person to judge this genre since I prefer fantasy over sci-fi. Also, this book made me realize that I rarely read or listen to books from a male's perspective. The narrator reads the book and doesn't do other voices for characters so it's easy to get confused for who is saying what. I liked it okay, it has good character development and lots of action, but I I had a hard time getting into it and didn't love it. I more heard the words than had it play out in my mind, like I normally would. But again, I am not the target audience. I would have no desire to do the challenges, and with all the desire the characters have to go to Eden, besides money, Eden sounds like a horrible place. Did I miss something? I normally wouldn't finish a book I have a hard time getting through but I felt like something more had to happen... then it did in the last hour and ended with a huge cliff hanger.

its okay (has spoilers)

normally, I love teen fantasy/sci-fi, adventure, future and midevil settings and this book HAD the potential of being big and locking itself in the same categories of Hunger Games or Divergent or maybe even The 100 (Netflix TV series) but the author didn't even let you create a bond with any of the characters and it seemed like the author just "tried too hard" and it shows. This book had really really good potential but literally, his "sister" like character he meets first ends up dieing about half way through and I generally get in my feels when a main character dies but since there was almost NO character development, it was like oh.. the main characters support/wise crutch just died -swings arm- shucks.
This could have been way better. Seems cheesy, fake(trying too hard), and the teen couple antagonist pisses me off because its like... dude... if you're really THAT dumb to want to kill the main character because Ken (barbies boyfriend, not their real names of course) sucks A$$, can't fight or compete, and its Babbles fault but yet they just keep trying to kill Emmit thinking he's the reason why? its so annoying. I'm really mad I wasted my money and time on this book.

Great book! There was never a dull moment and the ending had me rushing to get the next book in the series ASAP!

My 14 year old ADHD son loved thia series. Ive been looking for more books with this narrator. And more stories like this..