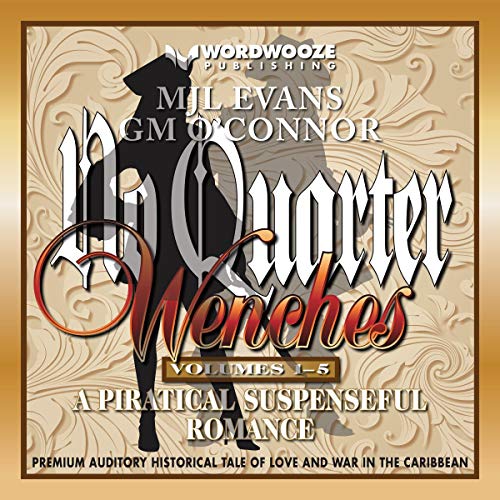 Behind every successful pirate is a cunning wench! The adventures in the Caribbean continue in Port Royal, Jamaica.

In 1689, Atia Crisp finds herself imprisoned in the wickedest city on earth, Port Royal, Jamaica, while the refugees from Strangewayes’s plantation in the Blue Mountains are on the run and seeking a new home, deep in the Caribbean. Captain Jean-Paul la Roche must get them to safety and find a way to liberate the woman he loves while waging a war against the English with the pirate Laurens de Graaf.

While besieged people suffer and starve, a group of women form a secret and illegal society deep from within the bowels of the city called: Wenches. A network that deals with smugglers, merchants, cutthroats,and thieves. Dragged into the struggle for supremacy of the Caribbean, the women are divided and find themselves engulfed in bloodshed. The pirates of Port Royal and former enemies may be their only hope of escape.

This edition was awarded the gold quality mark by BooksGoSocial, their highest award.

What listeners say about No Quarter: Wenches

Hours of a fun listen that will take you on a wild ride with pirates and wenches. Anne Marie Lewis is an awesome narrator. I love her accent.

This is a lot to wade through and the speech was unusual, but I enjoyed the baseline of the story and what the author presented. It is best if listened to in increments, and not the whole as it is quite lengthy but worth the listen. I voluntarily listened to a free copy of this and am giving an honest review. The narrator did a good job with voices and accents.

I don't wish to be unkind

for how long these books are. the romance I did not get. could have been told in one book. then I got confused with them, lost it when the doctor was left on which boat??!!

I didn’t like this book. I found the characters very confusing, I couldnt work out who was who or what any of them were in the story line. I tried to re listening quite a few times but found it boring I’m not sure if was the book or the narration. Not worth a credit and you can’t return. Wouldn’t recommend