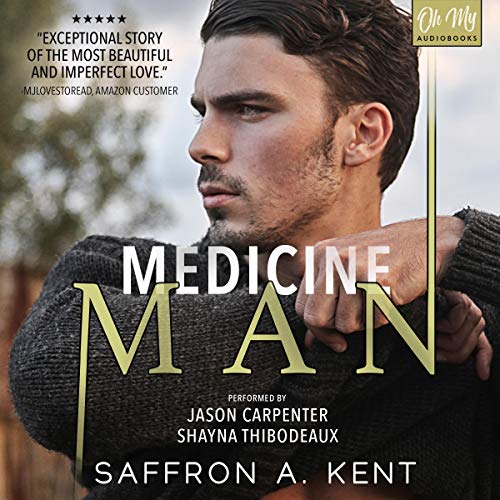 By: Saffron A. Kent
Narrated by: Shayna Thibodeau,Jason Carpenter
Try for $0.00

Willow Taylor lives in a castle with large walls and iron fences. But this is no ordinary castle. It’s called Heartstone Psychiatric Hospital and it houses 40 other patients. It has nurses with mean faces and techs with permanent frowns.

It has a man, as well. A man who is cold and distant. Whose voice drips with authority. And whose piercing gray eyes hide secrets, and maybe linger on her face a second too long.

No, Willow Taylor shouldn’t be attracted to Simon Blackwood at all.

Because she’s a patient and he’s her doctor. Her psychiatrist.

What listeners say about Medicine Man

Amazing forbidden romance! I was pulled into this story by Willow. I was rooting for her the whole way and of course for her friends. Simon also has demons he is battling and I felt his struggle. While there are some steamy scenes there are also some really sad moments. You will definitely feel an array of emotions while listening. The book is told mostly in Willows POV.

Narration was great both are very talented narrators. Jason Clarke has such a smexy voice and I hope he narrates more romance books. Shayna has a great voice too but her voice did not match the youthful one I imagined Willow to have.

Huge slip in this audio! The 2 chapters before the epilogue are out of order and it SPOILS ending. I hope they fix it for future listeners.

Most important chapters at the end transposed.

I had to order the book after listening and read the end to understand what was going on. What I found is that the two chapters before the epilogue were switched. So you hear the ending without knowing why it ended that way.

I must say it broke my heart to read the low ratings and the negative reviews this book has gotten. This book was one of the most incredibly, beautiful,eye opening books I’ve ever listened to. I’ve read a lot but this book is by far my second favorite book ever. Wow the emotion and love and inspiration it gives off. The narration was perfect. I felt like I was walking beside both characters understanding them as if I was right there. Please please please give this book a chance. I promise only a snotty prude would give a negative review. Definitely worth 10 credits.

Good but problem with chapter order

This was great :-) taboo, patient doctor - age gap but great. No cheating/OW drama and brings out a range of emotions. Fab narration. BUT the last two chapters before the epilogue are in the wrong order. So listen in this order unless the author fixes it (listing what you will hear next to what chapter audible will say so you can tell if it’s been fixed).

Anyways def give this a chance!!

A new Favorite By Author

First I have to say Narrator Shayna Thibodeau did a great job especially since most of the book is told in Willow's POV. i would've loved dual narration to hear more from Jason Carpenter. but still she did an outstanding performance taking this heartaching story to a new level.

Saffron A Kent placed me on an emotional beat down with this story, I CRIED, smiled and blushed thru this entire book, I was so engaged in what I was listening the world around me could be ending and I'd be non the wiser, truly this forbidden love story Is one everyone Needs to be READ.

This was such a great story of love in its most vulnerable and imperfect state. I love how it shed light on mental illness and really gave great perspective to a taboo topic. The love the two shared was genuine and very hot!

Its so insta lovey and i can't. I don't get why this one is so hyped as sooooo taboo and i guess it is in a way but it isn't sexy. Its cheesy and so insta lovey. She falls for him bc its called transference and why he falls for her i have no idea. there is no chemistry but she is damaged and he has mommy and daddy issues and wants to fix her

This was amazing in all ways! The writing was impeccable, the narrating top notch and the story will stay with me forever.

This is one of the best books I have ever read. The story is so emotional and gut-wrenchingly beautiful. The narration made it even better. I loved this audiobook. It was perfect in every way. Listen NOW!

A warrior and her dark knight... I loved it.

I really loved this story. I enjoy seeing something out of the norm, a story that makes me feel like any woman out there, even the bipolar ones, even the ones with OCD, they have a romance story they can swoon over too. I work in mental health and I don't know if the author just did some great research or if she's experienced some of this in her own personal life, but there were some excellent representations of and coping skills weaved within the pages. I cried many times throughout, thinking of my own struggles with anxiety and depression over the years as well as that of the people I've worked with in my career and the helplessness they sometimes feel when they're especially "them" and lucid. Those that struggle the worst feel like they've lost themselves, and it's hard to see that. That being said, I've also had the chance to see people grow and become so strong like our very own Snow Princess did. She was truly an inspiration of a character, and I loved everything about her. Her tenacity was something I especially loved; she didn't beat around the bush and I loved how she told Simon her feelings early on without waiting and being coy to see if he'd divulge his interest first. Then the story came alive with the intensity of the connection between them, and I couldn't wait to finally hear that HEA. Sure, it's not perfect, but it's closer than many people ever get. Some days are harder than others, yes, but finding that right person, the one that makes it all just a little easier, is something I think many of us aspire to, mental illness or not. I loved that this author could give a little hope to those of us that fight just to get out of bed some days and I love all of Saffron Kent's books that I've read. This was no exception and I highly recommend it.

What a beautiful story of Willow and her Medicine Man. It’s an age gap which sometimes feels uncomfortable for me to hear/read, but not this one because Simon is a little broken too so him and Willow fit. There’s some very hot sex scenes that are definitely not hard to listen to…especially because they real raw and honest. I loved this book.