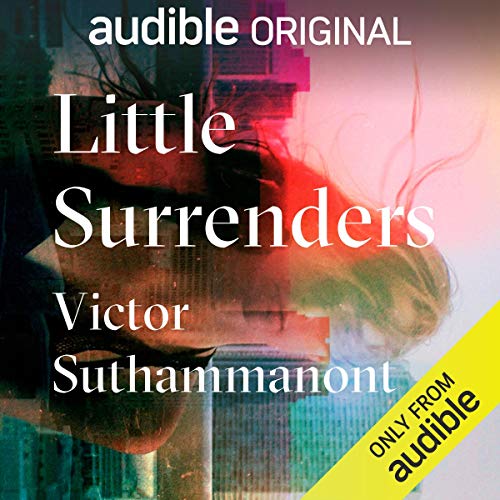 By: Victor Suthammanont
Narrated by: Ellen Archer
Try for $0.00

"Little Surrenders" is a dark, mesmerizing short story about a marriage that’s reached its breaking point, and just how far a woman will go to reinvent herself after one too many compromises.

She makes a list; she’ll need it if she’s going to escape the life she’s built. A week’s worth of clothes. Seven thousands dollars in cash. A new identity. A gun, to be sure. Maybe the list itself will be enough to erase all of the little surrenders that have brought her to this place. After all, as she tells herself and her friends: Mike’s a great husband, and she loves him. If she can just find a way to hang on a little longer, maybe she can discover enough of herself to make those lies true again.

But with each step forward - from stashing the cash to obtaining a false identity to others she didn’t anticipate - she finds herself accelerating down a steep slope, surprised that she’s enjoying the fall and getting to know the stranger she may actually be.

What listeners say about Little Surrenders

I understand where the author was going

but, to imply that getting a fake birth certificate and passport is easy is laughable. Not to mention getting an unlicensed handgun. I like the idea of the changing 1st 2nd and 3rd person but I thought the story could have been a tad more believable with the character finding a different way.

This was a short listen but it packed quite a story into less than an hour. A 10-year marriage has gone sour and one partner wants out. How far will they go? Excellent. Excellent.

The narrator was incredible. There was a certain blandness to one aspect of the wive's thoughts and that was very present. Just one of the many Audible Originals that are next level!

It felt too short for me. The book moved too fast and didn't dive deep enough into the complexity of the relationship.
I found myself asking why she needed to kill him instead of understanding her thoughts.

beware. this story can get under your skin.

the rhythm grabbed me right away. you will want to be ready to try to distance yourself. My guess you will see yourself in many passages.

This was a long, tedious monologue about a woman with an abusive husband planning a new life and a murder. Thrown a curve, the story just stops and doesn’t end. Glad it was Plus, don’t spend money or a credit on this.

the narrative was great.i liked the story and the writermuch.it was good to enjoy it again

Amazing short story! I will most definitely be listening to this one again!
Keeps you interested until the very end, full of surprises!!

This story is well written. The attention to details make it more interesting. The story is unique and plausible idea, but the end falls flat. It’s not so much how the story ends that is disappointing, it’s the way we are told.

Wonder wonder why or who wrote the book of love

Story provides lots of food for thought; like why some people give in and surrender in the first place. Would it mean a fight? Aren’t some things worth fighting for? Why is it hard for some people to just say what they want and don’t want ? Clearly it is difficult for many people to do this, men and women but I think fewer men than women because women have been socialized to be pleasers. As this story makes clear, little surrenders ultimately lead to loss of self. Some people want to avoid confrontation at all cost instead of doing the really hard work of compromise and learning how to create a win/win in a relationship.

the thing that men are obvious to. Not to ruin anything but it's sad how people hinder their potential by relationship prison.