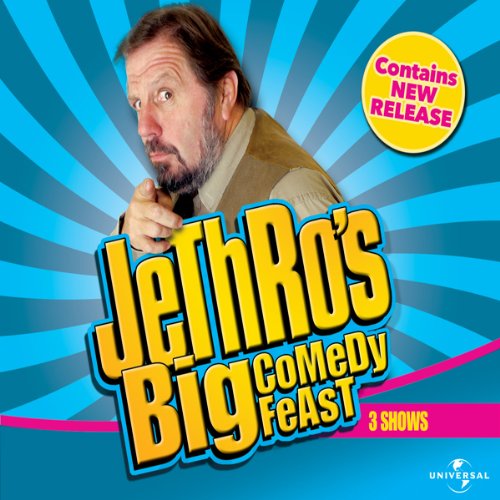 By: Jethro
Narrated by: Jethro

A Giant Portion of Jethro Live
If you think you know Jethro's most hilarious jokes then think again! For the first time, enjoy the very best of Jethro's best-selling live shows - from Salisbury to Somerset, Worthing to Wisbech and of course Live at Jethro's, it's time for a Giant Portion of the daft and barmy from your favourite Cornishman! Jethro spins side-splitting yarns with a little help from Denzil Pemberthy including Olympic and dog-swallowing condoms, being hospitalised by a hoover and banned from a supermarket. Tastier than the finest cream tea and packed with more content than a Cornish pasty, fill your comedy boots with A Giant Portion of Jethro!

Jethro Live
Jethro reveals all in his hilarious live show. Laugh 'til it hurts as Cornwall's best-loved comic takes a look at life - as only he can! Discover the meaning of "twern't" and find out what happened when Jethro's pal, Denzel Penberthy, popped into the clock shop! Featuring Jethro at his belly laugh best - performing live - plus a collection of cracking sketches, this is one portion of West Country wit you won't want to miss.

Jethro Slightly Naughtie
He's Big, he's Beefy, it's the funny man from Cornwall! (must be the cream teas), JeThRo, will give you GIGANTIC belly laughs as he spurts forth his hilarious observations on life, for example... sheep chasing in Wales, and how lucky women are to sit down to pee when men have to aim at a moving target...that's daft that is! And there are stories to tell about JeThRo's friend, Denzil Penberthy, who gets very confused at the smallest things... what do you take to the Antiques Roadshow? and How do you get dogs muck off your shoe? OH HELL! that's A PORTION OF JeThRo, outside Cornwall and performing live at The City Hall, Salisbury! ... THAT'S OFFICIAL!

found it go be very repetitive on some of the story lines. but some brilliant laugh out loud moments.

Hilariously un-PC, good fun and crude humour but with 4 chapters I found constant repeat of jokes across all chapters which made this feel a but of a rip off