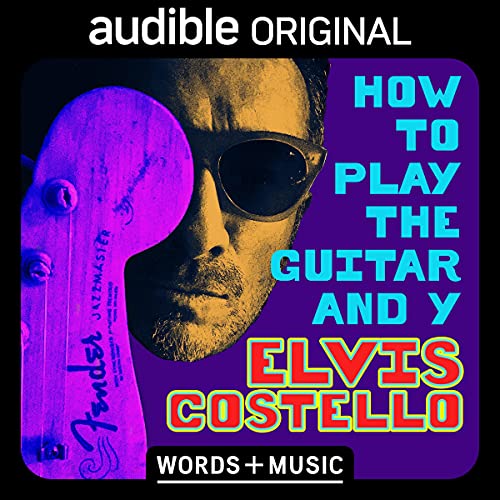 How to Play the Guitar and Y

“This isn't strictly speaking an instructional manual, but a work of comedic philosophy.”

Elvis Costello - songwriter, singer, author, and Fender Jazzmaster known to his admirers as “The Little Hands of Concrete” - spins his tale with wit, grit, and spit to spare.

How to Play the Guitar and Y, Costello’s new entry into Audible’s Words + Music series, combines recitation, impersonation, and musical illustration to show you how to turn a three-chord trick into a four-chord caper and let your curiosity take you where it will.

Part madcap musical method, part comic chronicle, How to Play the Guitar and Y is accompanied by the author throughout on a number of different instruments with his 10 wandering fingers.

So gather round your favorite listening device to hear a storyteller and musician at his most captivating as he reminds you not to be afraid to fail and to never forget to play.

Born in London and raised there and in Liverpool, Declan Patrick MacManus—also known as Elvis Costello—has been performing in public for over fifty years, solo and with the band Rusty, the Attractions and his current ensemble, The Imposters.
He is a writer and part-time musician who made number of records in the twentieth century, some of which are still remembered today.
Elvis Costello is the composer and lyricist of several hundred songs, including fifteen titles co-written with Paul McCartney and renowned collaborations with Allan Toussaint, The Brodsky Quartet, and T Bone Burnett, with whom he wrote the Academy Award-nominated song, "The Scarlet Tide."
Costello has composed songs for artists like Roy Orbison, Chet Baker, and Johnny Cash and written songs with Loretta Lynn, Fito Paez, and his wife, Diana Krall.
He has written lyrics for music by Billy Strayhorn, Oscar Peterson and for twelve Charles Mingus compositions, as well as composing music for twelve unpublished lyrics by Bob Dylan.
Costello’s most enduring songwriting collaboration has been with Burt Bacharach, beginning with the song "God Give Me Strength" in 1995 and continuing to the present day. Their co-written, award-winning album Painted From Memory led to the composition of a significant number of songs for musical theatre, some of which were collected on the album Look Now and the EP.
He is author of Unfaithful Music & Disappearing Ink, a more than 600-page memoir which has been translated into six languages. Costello is also the composer of a half-finished opera, two ballet scores, and songs for several motion pictures and stage musicals, including an ongoing adaptation of Budd Schulberg’s A Face in the Crowd.
Making his debut in 1977 with the Stiff Records release My Aim Is True, Costello’s recording catalogue now runs to more than thirty-five titles, including Get Happy, Imperial Bedroom, King of America, All This Useless Beauty, North, National Ransom, and Wise Up Ghost with The Roots. 2021 has seen the release of a Spanish-language adaptation of his 1978 album This Year’s Model entitled Spanish Model.
He is a member of both the Songwriters Hall of Fame and the Rock and Roll Hall of Fame, and in 2020 was awarded an O.B.E. for his services to music. He holds two honorary doctorates in music, one from the University of Liverpool and another from the New England Conservatory. Despite this, he is known for playing the guitar with almost no regard for common sense.
ORIGINALS

What listeners say about How to Play the Guitar and Y

I met Elvis in Nashville back in the early 90’s. As a gobsmacked fan, it took everything in me not to just gush stupidly. Luckily, I succeeded. The guy that I met that day is the guy you’ll hear if you listen to this. Fully engaged, funny, and utterly human. Even a little silly.

This was fun. I hope you all enjoy it as much as I did.

Hilarious and spot on!

As a student of the guitar, as well as a fan of Elvis Costello, I wasn't sure what to expect from this little audiobook. It turned out to be delightful and full of laser sharp observations about the process of learning to play any musical instrument, but especially the guitar. It also humorously describes the way a fledgling musician starts to unravel the mystery of the rules of music.

I wish this fanciful monologue about music and guitars were longer. I have tickets to see Elvis and The Impostors next month, and the timely appearance of this Audible book was a delight. It did not disappoint at all. The sound quality of the recording and the timbre of Mr. Costello's voice was superb on my car's speakers. I had no idea this jerky young man would turn into such an eloquent writer and speaker.

Now I have to seriously consider a ukulele!

Made my musician heart happy

I struggled with guitar as a teenager, with the very F chord Elvis talks about. As I'm restarting my guitar life as a (gasp) middle-aged adult, I feel the journey more. This does have good and real stuff if you did want to learn music, especially the guitar. More than that, though, this is a story charmingly told.

Really, I loved Costello's speaking voice, and if he were game to do other book narrations, I'd be all over that.

Not Sure What Happened

I'm a longtime fan of EC's music, in all its incarnations. But, I'm also a teacher of 30+ years' classroom experience. If this audio essay is genuinely constructed to instruct, it is a rambling mess. It's one thing to be witty between songs at a show because when it comes to the main event, the music, he can deliver the goods. The same wit, however, bends to break under the strain of trying to bookend bad pedagogy. I love you, EC, but teaching --like composing-- is a craft worth defending.

Finally The Truth About the Guitar is Out!

The book nails it perfectly, the pain and effort it takes to play. I have been playing for over 20 years and Elvis brought me back to my early beginner days and me asking again and again, "why am I doing this". The guitar is so fun to play but takes a special mind set to play. If you are in the early phases of Guitar please read this book, you will not regret it. He is spot on in everything he says. If you have been playing for years you will still love it. Very fun and included with my membership.

Loved the book and gained a better understanding of how and Y the guitar is a great instrument. How to address the learning process and what to expect.

I really enjoy the Audible Originals in this series. I'm a huge Elvis Costello fan. I love for him to do something on his song writing as well.

An afternoon conversation with an instant friend

You don’t have to be an Elvis Costello fan (or even know who he is) to enjoy his insightful commentary on playing an instrument and music history. It felt like a 98-minute conversation with an instant friend, who happens to have his guitar on his knee. If you’re at all familiar with guitarists in the 60-70’s, you’ll probably appreciate this playful, perceptive, and well-narrated audiobook. Really, Mr. Costello, you need to narrate more books.

What a cute, endearing, artful display. A very slight how to, and a bigger slice of what to and y.