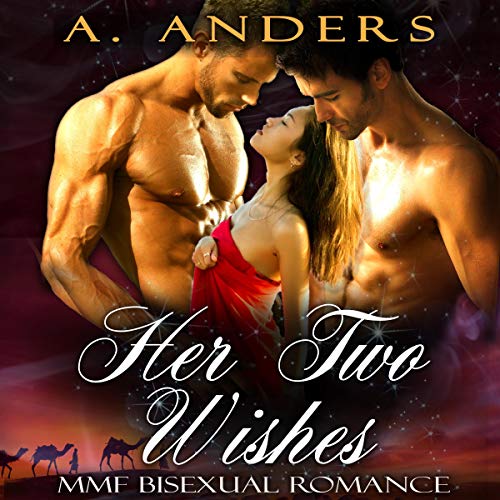 A sheltered princess meets a gorgeous bad boy and his irresistibly sexy best friend. Love and heartbreak will cause heroes to rise while danger and tragedy turn friends to lovers in this epic soul mate romance that you won't put down until its HEA ending.

Jasmine has been having dreams. In it, a rippling god claims her innocent body and makes it his own. That is only a dream, however. If she wants to be touched by a man in real life, she would first have to escape the palace where her father, the sultan, has forbid any man from looking her in the eyes.

But something is telling her that her first love lies beyond the palace walls. How could she get there? Everything would have to go exactly right. Which means that her future would all come down to fate.

Aladdin hasn’t been innocent in a long time. Street smart and confident, he has an all-consuming secret: He’s attracted to guys. That isn’t the reason he saves a fellow street rat from being beaten. But that is the reason Aladdin looks into the beautiful boy’s grateful eyes and quivers for his lustful touch.

What will Aladdin do when he realizes that his beautiful boy is Jasmine in disguise? Will he recognize her as his soul mate? Or will the tragedy that tears them apart lead him into the arms of a loyal friend who would do anything to keep Aladdin safe?

With a powerful sorcerer willing to destroy the kingdom to keep the three separated, Aladdin will have to make a sacrifice. Will he choose Jasmine or his best friend? Or will Jasmine, with two wishes of her own, come up with a way for this love triangle to live happily ever after?

Adventurous days and steamy nights follow in Her Two Wishes, an ultra-high-heat reimagining of a classic fairy tale. This bisexual menage romance has twists and turns, explicit MF, MM, and MMF scenes, and a not-to-be-missed HEA ending!

What listeners say about Her Two Wishes: MMF Bisexual Romance

Hi,
I'm Alex Anders, the author and narrator of 'Her Two Wishes' and I wanted to share some of the things that are special about this book that you wouldn't be able to get from the description or the sample.

Examples of the differences in the 'Arabian Nights' story are that the princess is Chinese, and the story take place in China. Introducing that cultural aspect allowed 'Her Two Wishes' to go places it couldn't if I had made her Arabic or based in elsewhere. And, drawing on the 'Arabian Nights' story allowed me to structure it in a way that allowed for all of the twists and turns in the story. What is true about all of my MMF romances is that you will not be able to guess where the story is going, and this is especially true with this story.

The final thing I would like to mention is that, writing this story literally changed my thinking about relationships. It's not giving anything away to say that, in this story, Aladdin struggles with this attraction to men. The way he resolves it within himself is unique. In fact, once I wrote it, I literally stopped typing and immediately join a particular dating site. Going through Aladdin's thought process, literally reshaped my view of myself and the way I thought about my attraction towards men and women.

Again, this is not your childhood fairytale. It's unexpected and very steamy. I hope you get as much from listening to it as I got writing it. And if you like this book, you can check out my upcoming MMF romances which will be coming out soon, as well as my 49 other sexy audiobook titles. :-)

One of the worst audiobooks I've read. A rip-off of Disney with squeaky voices and terrible accents. Background characters are the most offensive stereotypes possible, and the main characters are insultingly stupid. I turned it off in disgust when the casual rape started.

This is very, very different to the story we grew up with. In children's fairy tales situations are glossed over for a child's understanding. In this story, Jasmine is basically a prisoner. No one is even allowed to look at her. Her father is uncaring and has no desire to know his daughter, much less care how she feels. I loved how Aladdin rescued her from a beating and just kept her. Of course, he thought she was a boy but he still took care of her. I loved the Genie and how compassionate he has become over the centuries. I read this in one sitting. Lost a bit of sleep, but it was well worth it.

Would I listen to it again: probably
Did the story keep me engaged: yes
Was I invested in the characters: yes
What did I like about the story? This is a twisted, re-envisioned take on the Arabian Nights. It has a good plot, the main characters are interesting and there is a lot going on (intrigue, drama, magic, relationships) to keep the story moving.
Was there anything that didn't work for me? not really

I enjoy Alex Anders narrating his own books, he knows the heart of his characters and this comes through in his narration. I had no problem distinguishing characters or feeling the emotions of the story.

This is the first A. Anders book I have listened to, but it probably won't be the last. I found him through his excellent podcast "Bisexual Real Talk." "Her Two Wishes" is a very satisfying story. I immediately cared about the characters, was engaged by their adventures, and and my thoughts were provoked by the themes. Anders manages to explore a surprising number of dualities in a simple story including false privilege/true freedom, slavery/sovereignty, truth/illusion, and shame/acceptance. He also draws from the Arabian Nights version for his source material, which is set in China, and gives a different perspective than the Disney version. This prompted a Wikipedia search into the murky origins of the tale, and now I'm intrigued to learn more.

While the main characters of Jasmine, Aladdin, the Jinni, and the Vizier are vivid, the other characters are not well defined and seem to serve as means to ends. I think Jasmine is the only female character who speaks, and while her actions drive the story initially, she quickly takes a backseat as the male characters take over. Also, I hoped for vulnerability in the Vizier, but he is all Big Bad. I took stars off for these things.

Alex is a talented and expressive narrator. It is easy to tell which character is talking and I feel their voices fit their personalities with the exception of Jasmine. Granted, I know it is challenging for a grown man to voice a young woman, but I think in his effort to soften his voice he overshoots it and makes her sound weak and unsure even when she delivers bold and daring lines. Nevertheless, I commend him for expressing his characters' hearts, keeping me engaged, and exploring complex emotional themes within bisexuality, friendship, family, and society.

I enjoyed this narrator and this story. Both together make one delicious audiobook. It will be put on my list for relisten.