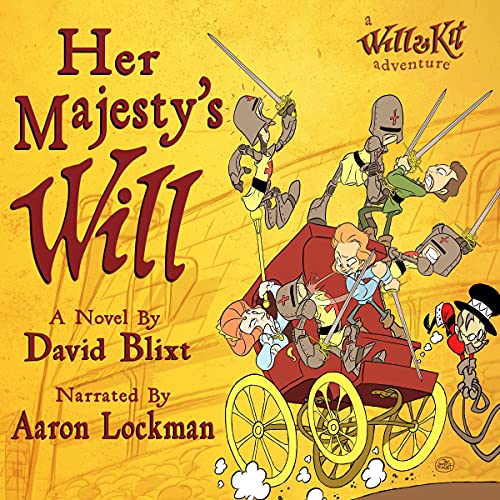 By: David Blixt
Narrated by: Aaron Lockman
Try for $0.00

Before he was famous, he was a fugitive.

Before he wrote of humanity, he lived it.

Before he was the Bard of Avon, he was a spy.

England, 1586. Swept up in the skirts of a mysterious stranger, Will Shakespeare becomes entangled in a deadly and hilarious misadventure as he accidentally uncovers the Babington Plot: an attempt to murder Queen Elizabeth herself.

Aided by the mercurial wit of Kit Marlowe, Will enters London for the first time, chased by rebels, spies, his own government, his past, and a bear. Through it all he demonstrates his loyalty and genius, proving himself to be - Her Majesty's Will.

Combining the whimsy of William Goldman's The Princess Bride with the swashbuckling panache of Raphael Sabatini, and inspired by the Hope/Crosby Road Movies, this rollicking novel takes solace in knowing that these events surely never happened, while secretly hoping that they did.

What listeners say about Her Majesty's Will

A silly Shakespearean story that kept me quite entertained. A great COVID escape. Great narration - I’m sure I enjoyed this much more on audio than I would have reading it.