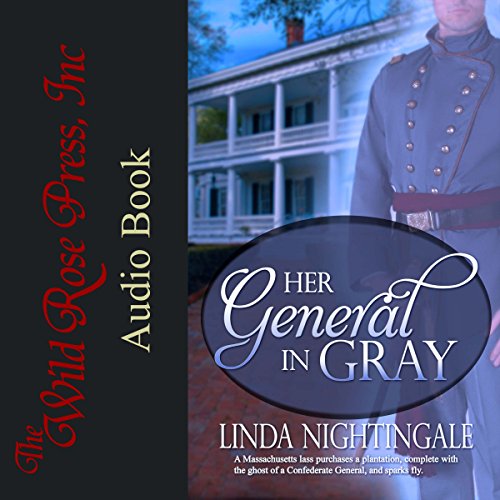 Her General in Gray

By: Linda Nightingale
Narrated by: Joe Formichella
Length: 2 hrs and 28 mins
Categories: Romance, Paranormal
3.5 out of 5 stars 3.7 (39 ratings)
This title is included in Audible Escape

Her General in Gray

Autumn Hartley purchases Allen Hall at a steal, but the northern lass gets far more than a beautiful plantation in the South Carolina Low Country. The house comes complete with its own ghost, a handsome and charming Civil War General - for the Confederacy. The stage is set for another civil conflict.

John Sibley Allen died in battle from a wound in the back, the bullet fired by the turncoat, Beauregard Dudley. The traitor's reincarnation is Autumn the Interloper's first dinner guest. Sib bedevils her date and annoys her with fleeting, phantom touches, certain he can frighten her away as he did previous purchasers. As time marches on, her resident ghost becomes more appealing while her suitor, Beau, pales in comparison. Autumn finds her ability to love didn't perish in the divorce that sent her south seeking a fresh start.

After over a century in the hereafter, Sib discovers he is falling for none other than the feisty Yankee girl, but what future could a modern woman and an old-fashioned ghost possibly hope for?

Narration takes away from

Her General in Gray by Linda Nightingale is a short, sweet novella that unfortunately isn't as entertaining as it could be due to flat narration. The story itself revolves around the ghost of John Sibley Allen, whom still resides in the house, Allen Hall, that he lived in at the time of his death. Now, in the modern day, Autumn Hartley is living there and the two begin a sort of friendship that goes stronger as time passes. When the reincarnation of the man that murdered Mr. Allen arrives at as a guest of Ms. Hartley, the fun begins.

Joe Formichella's narration needs some help. Though is voice is pleasant, his narration of this novella is flat and monotone. I had to restart the book a few times before I got into it because of this. If the book sounds interesting to you, I would just encourage you to listen when you don't have distractions around you and when you aren't super sleepy so you can pay attention more so than you likely need to listening to other audiobooks. I was voluntarily provided this free review copy audiobook by the author, narrator, or publisher for an honest review.

the sugar is pouring out from this book

Her General In Gray by Linda Nightingale was a good read. Autumn purchased a home for a steal but she didn't expect the house to come with a ghost. This was a good quick read.

Though this was a short story it was very sweet and very enjoyable. Autumn has purchased an old southern plantation complete with a ghost. Sib has been scaring away previous owners, however he is attracted to Autumn and getting rid of the present owner isn’t as important to him as it used to be. The storyline was quite unique and very entertaining. Autumn and Sib made a sweet couple and it was interesting how the author brought them together. I thought Joe Formichella did a good job of his narration. I received a free copy of this book and have voluntarily provided this unbiased review.

the narration was flat and slow. The story was sweet but the characters were shallow.

it took me a while to get into this story, but I ended up enjoying it.

The narrator is terrible! No inflection in his voice. Sounds like Matt mcmoheny but much to bland!

I thought this book was overall okay. It starts right out of the gate and I thought I may have missed something or my audio skipped but it didn't. It was a cute quick listen but I believe it could have come to life MUCH better if the narration was different. He was very mono toned and there was no passion or excitement.

Autumn, a Northerner, buys an old house in the south, which comes with its own ghost of a Confederate soldier, Sib. When Autumn invites a neighbour over for supper, it's the descendant of the person that had killed Sib during the Civil war. Needless to say Sib gets his nose out of joint, especially when he and Autumn develop feelings for each other.

This was a cute story.. and I enjoyed it.

Amazing story and characters. Such an intriguing ghost story and not your typical one. Such a sweet romance. Loved he narrator too! I received a free review copy of this audiobook at my request and I have voluntarily left this review.