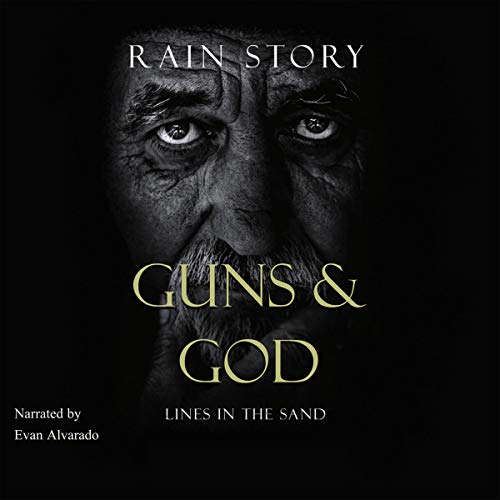 Guns & God: Lines in the Sand

By: Rain Story
Narrated by: Evan Alvarado
Try for $0.00

Guns & God: Lines in the Sand is an electrifying adult crime-thriller involving murder, conspiracy, and infidelities that jolt a community as two neighboring families collide over political ideas about gun laws. While one family tries to usher in stricter legislation, the other struggles against it in order to expand its empire of gun sales. However, when patriarch Luke “Fuzzy” Rose learns that a family member will stop at nothing to overtake the family business, all hell breaks loose, sending the family on a manhunt to end the dark plot and exposing its plans for civil war.

This novel is set in the heartland of the modern-day gun debate: Arkansas. It is a state where gun ownership and religious institutions represent some of the highest ratios in the country. With strong culturally-embedded ideas of freedom of religion and a die-hard unwavering commitment to the Second Amendment, this drama illustrates the shared fears and concerns of many gun-toting citizens across the U.S. It also illustrates the extent that some will go to in order to preserve and protect their heritage, cultural traditions, and constitutional right to bear arms. It is important to understand this Southern gun culture so that together we may work toward resolve, compromise, and a less gun-violent American society. This story has never been more important than it is today.

Rain Story is an Arkansas native. Her experiences of growing up in the South give this story riveting surrealism. While the narrative is not indicative of her own beliefs, it is nonetheless written true to form. Rain is an alumna of the University of Arkansas at Little Rock, the University of New Mexico, and the University of Kentucky. She is also a Donaghey Scholar and a fellow of the William G. Cooper, Jr. Honors Program in English.

What listeners say about Guns & God: Lines in the Sand

This book grabs you from the very beginning!

if you have spent any time in a rural area you will recognize the characters in this book. The author artfully weaves topical issues into a conservative, Christian, patriarchal family while developing characters that are authentic and relatable.
if you want a book that is thought provoking and entertaining this is a great choice.

Worst book I have ever bought

I have been an Audible subscriber for years and have bought 100+ books. This is the worst book I have ever listened to. Not only is the plot sophomoric, but the production is terrible. You can actually hear the narrator turning the pages. Plot is based on every stereotype you can imagine relative to guns, the NRA, the second amendment, the south, etc. Do not waste your $s.