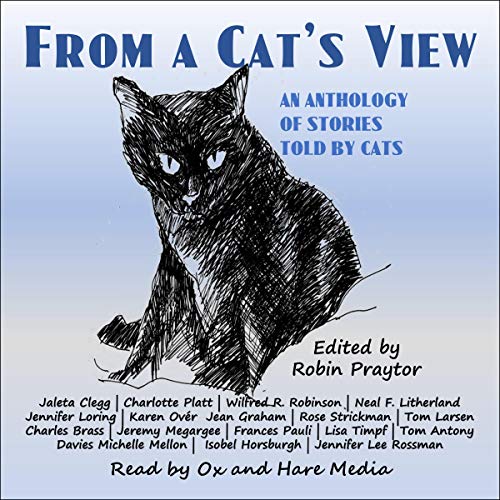 From a Cat's View

By: Robin Praytor - editor
Narrated by: Ox and Hare Media
Try for $0.00

Stories Told by the Cats Who Lived Them

Humor, adventure, romance, tragedy, and joy - From a Cat's View is a novel-length, mixed-genre collection of short stories that will tug at the whiskers of cat lovers everywhere. This unique anthology is drawn from a pool of exceptional writers in the US, UK, and Canada, who share fascinating insights into the relationship between humans and their feline owners:

"The Cemetery Cat" by Jennifer Lee Rossman
There was a cat for each grave - 347 in all - and one had unfinished business.

"Special" by Charles Brass
Family is...well, family. Maxie is special, and only Aunt ’Po can lift him from the gutter to the good life.

"Tishy" by Isobel Horsburgh
Some cats are talented. Others are unnaturally talented. Tishy outdid herself the day she brought home Quintus Liberalis.

"Intrepidus" by Jennifer Loring
It wasn’t the first time he’d made her feel alone and unloved. The breach between cat and human can be insurmountable, and the need to strike out from the pain of unrequited love, impossible to ignore.

"Witch Cat" by Frances Pauli
Her kind are on the way out, but Old Gert isn’t one to go quietly. She knew just what to do: Cheat! "Here kitty, kitty."

"Mau of the Pharaohs" by Robin Praytor
Favored by the living God, Tutankhamun, Mau, in exchange for safe passage to the next world, offers Bastet his life story as viewed from the laps of three pharaohs.

"Big Ears" by Wilfred R. Robinson
A plague curses the village of Culloden and beyond. Little do the superstitious humans understand they’ve condemned their only chance for salvation.

"Nice Work if You Can Get It" by Karen Ovér
Freedom is only as good as the next pilfered salmon fillet. Atticus prospered, now it was time to level up to fulfillment.

"The Open Road" by Lisa Timpf
Most shun the solitary life; a few seek it. Quicksilver, ship’s cat by profession, was in the latter group.

"Mulgrave’s Resolve" by Michelle Mellon
Endurance, boredom, hunger, anger, reward: Mr. Mulgrave conquered the milestones on the road to survival one at a time, alone. But for the last mile, he’ll need providence at his side.

"The Cat’s Apprentice" by Rose Strickman
Change is bad; being ignored is unacceptable. No one was putting Malcolm in a corner - certainly not this interloper-wizard-wannabe.

"Stray Cat Strut" by Neal F. Litherland
The street’s no place for Manhattan lovelies with names like Princess. Leo never expected to be sought out by a damsel in distress. But Tig sent her, and Leo owes Tig a favor.

"Savannah and Savannah" by Tom Antony Davies
If you find a lost cat with your name on its collar it’s fate...right? Meant to be. But what if it really is meant to be? Think about it...think twice about it.

"The Real Thing" by Tom Larsen
Locked in a vending machine, Leon’s stomach rumbled. He could hear his little girl calling him home.

"Third Eye Living" by Jaleta Clegg
All cats have nine lives; only the bravest have three eyes. When Mr. Fluffers’ mother warned him about fairies, she failed to mention their pointy spears, sharp teeth, and evil grins.

"The Stray" by Jeremy Megargee
I kill to eat, and to feed the big pink one that cannot hunt. There are fences, and barbwire, and smoke that burns the eyes and throat.

"Tin Opener" by Charlotte Platt
Justice arrives on the heels of the reaper. When Jasper’s tin opener is killed, he uses his knowledge of the occult to summon help.

"Cats Are Patient" by Jean Graham
Six thousand years of plotting threatened by one weak human. Not once, in the long history of the Ailurian, had they found it necessary to dispose of a human...until now.

What listeners say about From a Cat's View

Loved it. Read it twice. I can imagine my cat doing some of the situations.

NOT YOUR NORMAL TABBIES!

This is not a collection of Chicken Soup for the Cat Lover type stories, where all of them will leave you with a warm fuzzy feeling!
This is a collection of unique, well-written stories about Felines with all too human emotions!
Envy, friendship, jealousy, loneliness, camaraderie- all these familiar sensations are experienced in these pages- but thru the viewpoint of the Cat that is the central character in that particular story - from Ancient Egypt, to a Cemetary , to house pets , etc... each of these stories vary wildly from each other and there's something in here for everyone. Even if one doesnt particularly care for cats, the stories are interesting and you will certainly find many that will appeal to you. Some have a somewhat darkish theme , which I normally wouldnt care for, but written in this way and in this type of concept of personifying our little feline friends , it made these stories very interesting, different and entertaining. I did skip a few but that's what's so nice about a collection of stories!

I returned this once,but I was so intrigued by this book,That Im trying it again.listening on my Mac. Wont play on Alexa..:(