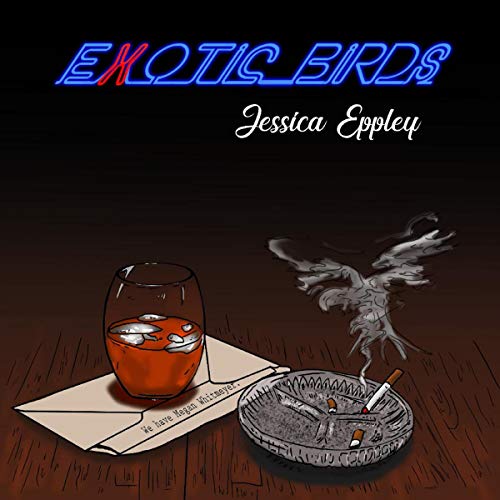 By: Jessica Eppley
Narrated by: Daryl Mayfield
Try for $0.00

The multi-billion dollar company, Whittmeyer Industries, is under threat of bankruptcy. The CEO and founder, Harry Whittmeyer, has been mysteriously murdered. His daughter and successor, Megan Whittmeyer, is kidnapped soon after.

Megan’s only hope for rescue rests on the shoulders of her smart-mouth slacker of a brother, Jack, the disowned son of the Whittmeyer legacy. His three, equally displaced friends have found themselves reluctantly along for the ride. Under the constant watch of an unknown enemy simply identifying as "The X", the foursome must travel to Ecuador, trek through the Amazonian rainforest, and face the kidnappers head on.

Assuming they don't kill each other first.

What listeners say about Exotic Birds

a surprising experience from a lesser-known autho

I happened upon this while browsing and decided to give it a try. I was pleasantly surprised by what I would mostly described as an excellent character piece with comedic moments. This was my first time reading anything from this author but I suspect it will not be my last. The story takes some time to set up the characters but after that it's Off to the Races with non-stop fun. The voice acting was excellent in this book Daryl Mayfield obviously liked the book and put in the effort

This book won't leave you hanging.

Its rare, most mysteries don't hook me like this did, my congratulations to the author.

A great start to a new world.

I know this author in real life. I got this as a free credit for a review. That being said, I think this is her best work. I do like thrillers. I think the characters had some good background. I do love an anti hero. All the different characters and different personalities made the book work. I think some of the book was forced as it didn't flow the same as other parts. I personally could have done without the swearing but in the context of the book it works. I think this will be a good start to a new series.

I really enjoyed listening to this book. It was my first time listening to an audiobook so at first it was hard to get into but once the story picked up I listened every time I was in the car.

This was a enjoyable book. Right from the beginning of the story I was hooked. The narrator did a awesome job putting you right in the middle of the story. I highly recommend this book.

This is a funny story about 4 friends who are thrown into a rescue mission. It starts out giving you an extensive introduction into the lives of each character before getting to the adventure part, but it doesn't drag on and never leaves you bored. You'll be laughing through most of it, as it doesn't take itself too seriously. The voice artist was engaging and made sure to do all the voices differently so as not to sound monotonous. A very fun listen!