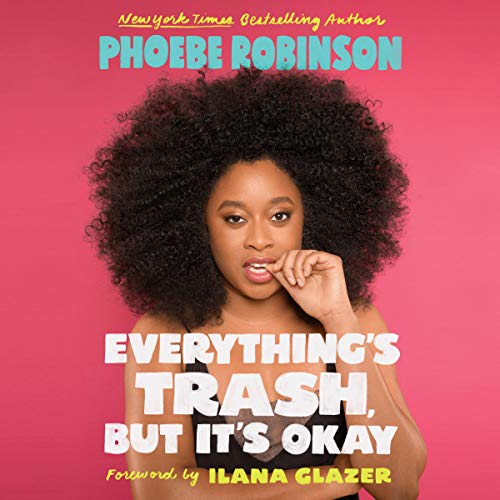 Everything's Trash, but It's Okay

"Robinson offers deft cultural criticism and hilarious personal anecdotes that will make readers laugh, cringe, and cry. Everything may indeed be trash but writing like this reminds us that we're gonna make it through all the terrible things with honesty, laughter, and faith." (Roxane Gay, New York Times best-selling author)

New York Times best-selling author and star of 2 Dope Queens Phoebe Robinson is back with a hilarious and timely essay collection on gender, race, dating, and the Dumpster fire that is our world.

Written in her trademark unfiltered and witty style, Robinson's latest collection is a call to arms. Outfitted with on-point pop culture references, these essays tackle a wide range of topics: giving feminism a tough-love talk on intersectionality, telling society's beauty standards to kick rocks, and calling foul on our culture's obsession with work. Robinson also gets personal, exploring money problems she's hidden from her parents, how dating is mainly a warmed-over bowl of hot mess, and, definitely most important, meeting Bono not once, but twice. She's struggled with being a woman with a political mind and a woman with an ever-changing jeans size. She knows about trash because she sees it every day - and because she's seen roughly 100,000 hours of reality TV and zero hours of Schindler's List.

With the intimate voice of a new best friend, Everything's Trash, But It's Okay is a candid perspective for a generation that has had the rug pulled out from under it too many times to count.

“[Everything’s Trash, but It’s Okay] is an irresistible mash-up of stream-of-consciousness venting and measured appraisals of everything from white feminism to Bono.” (Natalie Kitroeff, The New York Times)

“[Robinson’s] like your own approachably honest bestie - the kind you’d want riding shotgun on a cross-country road trip so that her sneakily incisive tangents could stretch and weave like so many highway miles… Even when she gets serious, doling out hard-won insights about money, body shaming or the challenges interracial couples face, Robinson keeps her wits about her.” (Washington Post)


The best self-help audiobooks for women zero in on universal themes nearly every woman grapples with in her daily life. From body image issues and impossible beauty standards to the expectation that a woman should always be nice, women confront many forces that leave them fractured and hurt. In these listens, experts on self-help for women offer a healing balm to that pain with suggestions on including self-love and acceptance in daily life.

What listeners say about Everything's Trash, but It's Okay

Phoebe Robinson's perspective, personal experiences and hilarious voice grabbed my attention right away. I laughed out loud a lot whilst walking around and listening to this book. In such tumultuous times, that is a precious gift. Highly recommend!!

enjoyed the book and laughed my A off but a little heavy on the U2... lol

it was so hard to listen

I was so excited to hear this book but it was boring. months later and I still cant finish it. it was all over the place and filled what I believe to be inside jokes cause the funny was lost

I appreciate her candor

A little hard to follow at times but she def lands her truth bombs! I'm glad I read this book.

Struggled to finish this one

I loved Phoebe's first book, but this one took me over a year to finish, and therefore I couldn't exchange it. The constant abbreviations and hashtags caused me to lose interest after about 20 minutes. I don't enjoy listening to something that sounds like a really long instagram caption.

you've got to get the audiobook over the printed book if for no other reason than her giggles!!

the story and narration are boring and unoriginal. much prefer her on podcasts. the constant abbrevs aka abbreviations make me roll my eyes.

So epic! And amazing! Anybody who’s looking for a good read has found it! Learn from this and really listen, I’m a white guy, white people should read both of her books truly a voice in our generation that we should listen to (like all the Black Women we should be listening too)

Hmmm...I don't know what to tell you on this one

Well, I am at a loss here. I was eager to download this book, after I heard Phoebe interviewed on NPR the other day. I really enjoyed her first book, and expected more of the same. But that's not what I got. I'm not sure what I got - I did not recognize the language. This book made me feel so old, I just can't delete it fast enough! I read the other reviews, and people enjoyed this book, but I don't even know what it is about - every sentence was interupted with jibberish, hashtags and annoying cutesy abbreviations (abbrevs...) I like relatable stories written in English, with complete sentences and actual words - at least enough of this to catch my attention. I hope Phoebe's next book is more relatable (Yes, I'll give her another chance because she is talented and funny), but maybe she is writing for a very specific demographic. That's up to the author...

Phoebe RoRo does it again ie makes something I cannot stop listening to. Love the banter with #BritishBaekeOff too. She talks about serious and pervasive issues with the same hilarious prose as she covers lighter subjects, meaning there are many "hahaha...oh damn" moments which I incidentally live for.
Keep being great Phoebe. We're all here cheering you on!!