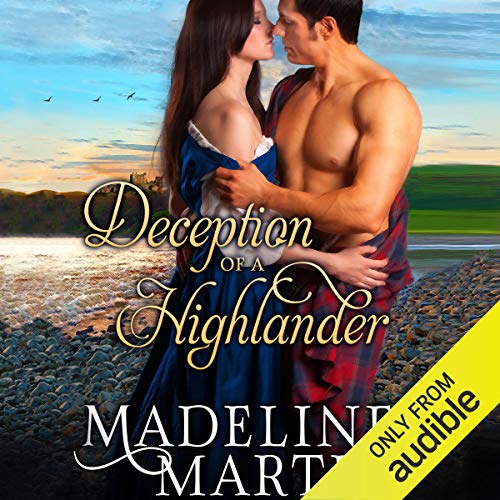 Deception of a Highlander

By: Madeline Martin
Narrated by: Liam Gerrard
Try for $0.00

Scottish romance doesn't get much steamier - or more dangerous - than a spy hunting her quarry and losing her heart to him instead. To pay a seemingly impossible debt, Mariel Brandon has become a spy for Aaron, one of England's deadliest minds. Aaron's latest mission for the sharp-witted and daring Mariel is to find two people in a heavily fortified castle on the Isle of Skye, a castle headed by the clan MacDonald and the powerful Kieran. Mariel is to seduce Kieran and get him to take her to Skye. If she succeeds, Aaron promises to let Mariel's young brother go and to free both of them from their debt. If she fails, her brother will die. What she doesn't count on is craving Kieran MacDonald almost immediately upon meeting him. Now Mariel must keep a secret from Kieran - one that could get them both killed - as she tries to form a plan that will save her brother, get her out from under Aaron's thumb once and for all, and keep her in Kieran's strong arms forever.

What listeners say about Deception of a Highlander

This book kept you turning the page or listening to the very last minute. I absolutely love the storyline and the characters. The narration on audible was wonderful. This is certainly a steamy love story!!! Definitely worth the read

Deception Of a Highlander

Yes! To a Historical fan! Nice cloak and dagger story.

The ending was my favorite.

The story of Mariel's life really makes you feel for her. And uncovering each detail of what makes her tick. What a sad time for her and of course this was common in those time.

Wonderful story-line and plot. I liked how the story unfolded near the end and so many things were brought to light.

I loved this story and the narrator's voice was good for both male and female.

I really enjoyed this book, my first by this author. She character developed very well, the emotions flowed nicely with the tempo of the book. It was long. But someone was always going on so it was easy to keep pace.
It’s a 4.5 star but we can’t do half’s yet. Ha ha
Plot 7(1-10) steaminess 7(1-10)

I absolutely love all Madeline’s books she brings life into her books where it’s hard for me to put down. And like always I end with tears 💕

I Love a Highlander

Deception, deception, deception is the game, but Mariel and Kieran cannot deny their attraction. This book is well written. Mariel's background is surprising and to me that's what makes this book so interesting.

Narrator held the story back

The plot seemed good albeit somewhat implausible. The heroes “almost giving in grew tedious. But the narrator’s voice and his Scottish accent were hard to get past to truly enjoy the storyline.

Madeline Martin is amazing, A must read, will get in print for home library, yes!

What woman doesn't drool over a HOT Highlander? Muriel was between the proverbial rock and a hard place in this fantasy adventure. Strength, perseverance, and unfaltering love for her little brother, Jack leads Muriel to the Isle of Skye and the romance with her HOT Highlander. Don't miss the thrilling recovery of little jack and Muriel's HEA.

Loved every minute of it. I couldn't stop listening. Such a beautiful steamy love story. Will definitely be listening to the rest of the series, as Madeline Martin's story and Liam Gerrard are a brilliant team. The narrator was so good, his Scottish accent was brilliant. And the female voices were very good too. Loved everything about this book. i will definitely listen to it again in the future. Now on to the next one.

a really good story kept you focused throughout without getting bored. the passion between the characters was really intense you could almost feel it.