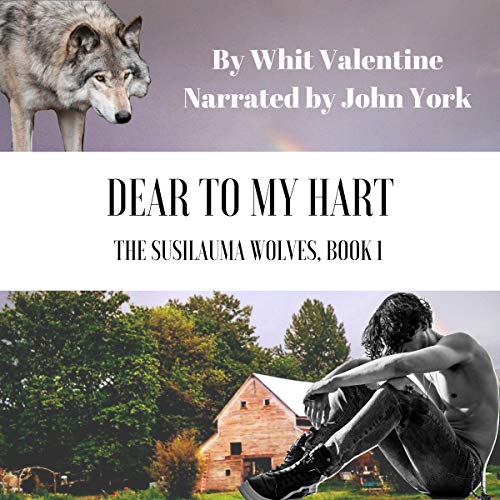 Dear to My Hart

By: Whit Valentine
Narrated by: John York
Try for $0.00

Living on his family's farm, Susilauma, the youngest of many brothers and sisters, 25-year-old Riley Jacobson has a predictable and comfortable-if slightly chaotic-life. His older sisters tend to mom him almost to death, and he finds his solace in working on cars, not really considering the future beyond the next project. He's happy enough with the status quo, and though a mate would be nice, he's not really looking. Enter a cutie with big brown eyes who keeps popping up wherever Riley goes, and Riley just might be in trouble.

The 19-year-old son of paranormal enthusiasts who classify themselves as vampire hunters, were-wolf killers, and ghost chasers, Quentin Williams struggles to hide what he really is so he doesn't end up the subject of his own family's paranormal blogging. As far as he knows they've never seen a single paranormal aside from him, and they don't even know he is one. However, there are problems: he's never alone (they live in a motorhome), he's spindly (if he met a vampire, he'd be toast), and he's asthmatic (running through musty houses and damp woods is an issue). The fact that his family do everything in their power to make his life miserable certainly doesn't make things easier.

A chance encounter on a full moon night, and both Riley's and Quentin's lives will change forever. That is, if they live long enough. Some unexpected revelations turn their worlds upside down, and the whole Susilauma clan will have to pull together to save Quentin and Riley's mating-and their lives. Contains adult language, graphic descriptions of sex between male, brief instances of domestic abuse, and violence. The Susilauma Wolves stories contain the true mates trope.

What listeners say about Dear to My Hart

Dear to My Hart

I loved everything about this Shifter book and the way the story was written and delivered to us. I loved the characters and their personalities and how they all interacted with each other.

This narration was fabulous!!! You could really tell the narrator was having fun with the story and characters and that he put a lot of effort into making this one. I was fully impressed by his enthusiasm and how many different voices and emotional tones this narrator gave us for each and every one of the characters in this book. It was fun, and funny, and I enjoyed this audiobook just so much. The author did a great job in picking this narrator to bring this story to life.

Everything about this book worked for me as a whole and I enjoyed every single minute of it.

This book was sweet and fun with a plot that was interesting and keeps you intrigued and wanting more. I really couldn’t tell you at this point which of the main characters I really liked more. Both of the shifters Riley and Quinten fully and completely snagged a piece of my heart in this book. The way they met was pretty funny and had me laughing out loud. Riley’s humongous family is awesome, and surprisingly it wasn’t all that hard keeping track of who was who with so many of them even with all their shenanigans thrown into the storyline. I was happy that they all fully supported Quinten and Riley’s mating pair and allowed Quinten into their family and onto their farm with open arms. The only thing I really hated in this book was Quinten’s “family” and for good reason, which I am sure everyone who gets this book will agree on. They are horrible jerks who deserve the worst form of death upon them for everything they put Quentin through during his life with them. This book was really great though. I think that making Quentin more “innocent” and sweet was a good move as well. It was really cute watching him and Riley fumble their way through their first sexual interactions with each other. It definitely gave the book a more “real” feel to it. I was completely engulfed in this story from start to finish and I think it was made even better by the audio version. I would Highly Recommend this (audio) book to others and I cannot wait to get, read and hear the next book in this series. I will be watching and waiting for the next books to come out.

The story kept me engaged all the way. Loved the way the characters were written - very 3D, so much so that I wanted to hurt Quentin's fake family.
John York is relatively new to me (my second narration of his), but I'm fast becoming a fan. Very believable voices for all the characters. Looking forward to listening to the next in the series if narrates 🙂

New to me author. This was a MM shifter story of a wolf and a deer. I really like the story and look forward to more from this series.

Good to listen to

I really enjoyed listening to this Audiobook. It is a pleasant story with enough tension and drama to keep me interested. I really enjoyed how it is read, altough I have to say one or two of the different voices are too over the top for me. (The triplets for example...). But the difference between accents are hilarious!

I loved my first shifter book.

I really loved the story and the characters, both the MCs (Quentin especially is absolutely adorable) and all thw secondary characters, the clan and so on. And I hated the hunters. so. much!
John York 's narration is really good. Clear and steady, wonderfully interpreting the various characters. Really easy to understand even for a non native English speaker as me.
Can't wait for the audio of book 2!

I am enchanted with the story, a wolf and a deer shifter now that's a good recipe for an awesome story. I highly recommend it, you won't be disappointed

I love this series, well written characters and nicely developed world with just enough drama to keep you wanting more. can't wait for the next one!

I remember reading this book awhile ago and liking it, so I was excited to find it on Audible. It was a pretty standard shifter story with the true mate trope. How Quinten’s family tied into the story was unique and refreshing, as well. It was a pretty low angst, feel good story.

As far as the narration goes, this is the first I’ve heard from John York. He definitely has a good narration voice. I’d liken him to Tyler Stevens. He did the accents extremely well, but it almost seemed like maybe English isn’t his primary language? Some of the words were consistently pronounced wrong and some he put the accents on the wrong syllables. It was strange, but didn’t take away from the story and wasn’t enough for me to ding him a star. I’d happily listen to another book that he narrates, hands down.

ok so very mixed on this one. the book is absurd from the very beginning. I give the narrator props for not laughing while recording. the story is... complicated and not in the good way, the descriptions of sex were cringey in the best way. I was laughing from the start and this isn't a comedy. I'm getting the next two just to see if the absurdity continues. I encourage a listen, but don't expect much world building or character building.

Wow!
I love shifter novels, and this one ticks all the boxes of things I like about them. Mates, shifting, action, romance, sweetness, and even some quirky family members thrown in.

The narration was amazing. I haven't heard John York before, and he really captured the spirit and energy of the story. Excellent. I hope the next book in the series is available soon.