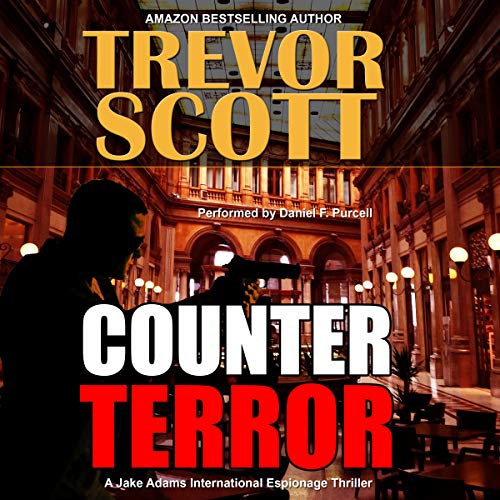 By: Trevor Scott
Narrated by: Daniel F Purcell
Try for $0.00

The world has increasingly become a volatile hotbed of terrorism. Europe is ground zero. And Italy is the next target. But Italy has also been the home of Jake Adams for the past few years.

When Jake is asked by his billionaire Spanish benefactor to investigate a situation, he has no idea he will be joining forces with a Malavita captain from Calabria. With a new baby daughter, Jake is a bit hesitant to get back in the game. Yet, his girlfriend Alexandra urges him to act, as long as she can help. She's been out of the spy game for a while and is anxious to do something other than change diapers.

Meanwhile, the Italian government seems paralyzed to inaction, uncertain how to deal with their shores being flooded with boatloads of refugees. Where there is chaos, there are those who will exploit the situation. Now, Jake must sift through the disparate entities to convert anarchy into justice.

What listeners say about Counter Terror

Terrorists over in Erupoe, the center of it seems to be seems to be Italy. A good spy plot. Good audio, given audio for my voluntary review

Who knew that a fanboy of Pythagoras would make a decent bad guy?
Jake and his woman, she's back in the game, go all over Europe to take out the bad guy and his cronies. Mostly in Italy though. Really makes me want to take out a map and follow where they travel. Makes me want to travel also.
Every book in the series makes me like our MC Jake even more.
The ending was pretty rough on me emotionally but definitely made me want to read the next book even more.
I enjoy Purcell's narrating because it makes me feel like my dad or grandpa is reading to me while I'm home sick in bed.
If you like spy thrillers I think you'll really enjoy this book and this whole series.