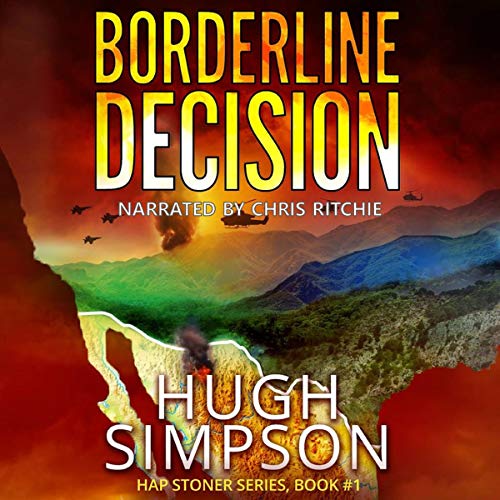 By: Hugh Simpson
Narrated by: Chris Ritchie
Try for $0.00

Snatched by a drug cartel. Forgotten by his government.

Fight with America's Secret Military Elite to Rescue a US Commander

With intense action and stark realism, author Hugh Simpson pulls you into the pit of a gut-wrenching black ops mission where you'll:

Borderline Decision opens your eyes to the chilling threat that lives at America's doorstep. You'll be forced to face the cold reality that your government conspires with people who want you dead.

All that stands between you and them are the silent heroes you've never met... until now.

“Borderline Decision takes you deep into daring black military operations you never hear about. The action is riveting and suspenseful. You'll live it, feel it, and ask for more.” (Casey Demchak, copywriter & consultant)

What listeners say about Borderline Decision

Borderline Decision: Hap Stoner Series, Book 1.. Superb military action adventure - Full of fast paced action and tension,I loved the book and especially the battle scenes radio chatter, the fog of war so realistically described.
I was a little disappointed by the ending which seemed rushed and could've should've described the political machinations.
Narration is excellent Chris Ritchie's narration blended seemlessly with the sound effects to create a feeling of being in the cockpit.
Bring on the next audio book .
I was given a free copy of this audiobook at my own request, and voluntarily leave this review.

I really don't like writing bad reviews so I'm not happy right now. But I agreed to write an honest review for this book.

Writing:
I'm a big fan of action adventure audiobooks/books so I was disappointed with this book. There is a lot of action which I loved but Hugh Simpson's characters were often dated stereotypes. The writer portrayed Marines as mostly "god fearing" men and the majority of females were referred to as mostly sex objects or as decoration for the men.

I can easily relate to the men in the majority of action novels. I've bought all the novels by Clive Cussler, Steve Becker, Mark Greaney, Tom Clancy, just to name a few. I cheer them on and want to fight side by side with them. I don't need a female lead in my action adventure. I can usually and easily relate to a male lead. Not so with these characters.

Production: Was amazing. I love, love, love the sound effects. They complimented the narrator and never drowned him out.

Narrator: Again, amazing. Chris Ritchie is an excellent narrator. He gave all the characters their own voice and it honestly felt like multiple narrators. I hope he continues to narrate. He seems to be a natural for it.

I loved that is book was Marine focused. My great grandfather was a marine and this story kind of hit home. It is filled with action but real life action. Not the movie unrealistic action. This is a huge plus for me!! Great storyline, well rounded characters, and the narrator's voice was good!

Here we have the introductory volume to a new series. Our hero and chief butt-kicker is Marine Reserve Lieutenant Colonel Hap Stoner. Stoner runs a successful business in his civilian life and fly’s AH-1 Huey Cobra helicopters for the Marines. This is a story of Marines aiding in the support and monitoring of our southern border to Mexico. Perhaps not so much in the capture of illegal aliens crossing our border but in the interdiction of drug smuggling and the slave trade. During an unusual firefight between Cartel and U.S. Forces several Marines are killed and/or wounded with one Huey Cobra going down resulting in the capture of Colonel Chuck Warden. The story then focuses on the political wrangling, deception, and corruption of both governments in an effort to hide the truth. Stoner organizes an illegal rescue mission in the name of “No Marine is left behind”. The action is fast-paced and believable, and the characters well defined. Hap Stoner is a bit bigger than life but that’s normal for this type of tale. This audiobook was given by the author, narrator, or publisher at no cost in exchange for an unbiased review via Audiobook Boom.

Chris Ritchie does Borderline Decision justice with a fantastic reading! The sound effects are top notch as well as keeping the voices perfect of all of the characters. Highly recommended to all Geo-political thriller readers and listeners!

Hap Stoner and his partner, Will, together fun a successful business but they are also reserve marine pilots. Lieutenant Colonel Stoner is well liked and good at what he dkes, proud to be a marine and respectful of his command officer, the popular call signed Tuna Man. Patrolling the Mexican border alert for drug dealers and human trafficking, the team respond to distress flares coming from the vicinity of a secret dug in and cross the border to attempt the rescue of the handful of men under attack by a large group of armed men, this made more difficult by the helicopters carrying no ordinance. The illegal raid is successful in that two men are brought out sounded but alive, but Tuna Man is left behind and it is obvious that the U.S. Government intends to leave him there, not something his comrades intend to let happen.

This Audiobook is amazing. Complimenting the superb narration by Chris Ritchie, whose fast paced reading exactly mirrors the pace of the story text as well as individually voicing the numerous protagonists, there are frequent gentle background sound tracks and technical tricks to thrust the listener straight into the heart of the action. As well as being a stunning story of fierce fighting and terrorism, the whole feels amazingly real. It is exhilerating, terrifying and, despite the numerous players and alphabetical jargon, it is totally immersive and still easy to follow.
One of those books for which a very special super star is needed to add to the rating.

I was very fortunate in being freely gifted a complimentary copy of Borderline Decision, by the rights holder, after requesting a copy via Audiobook Boom. Thank you so much. Story, narrator and production were all superb and I wholeheartedly recommend it to anyone who enjoys military action or conspiracy thrillers. It is a whole new experience.

If you are a fan of suspense and military story, this audio book is for you and it is hard to resist It is hard and cannot put it down once you started listening/ reading.

Good book, moves at a nice pace. Lots of military terms, with a large cast of characters.

Chris does a good job, he is a fast narrator, but once you get into it, this is a good listen. He does very well with so many characters.