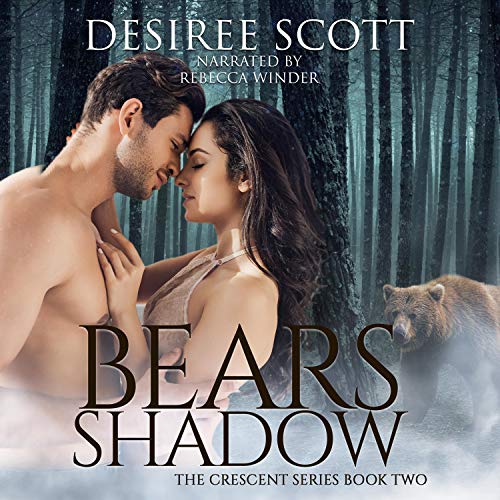 By: Desiree Scott
Narrated by: Rebecca Winder
Try for $0.00

Nikki Calhoun is on the run, fueled by terror of the shadowy world she had married into. Desperate to survive and nowhere to hide, Nikki turns to the wolf-shifter pack of her childhood, but it’s hard for her to trust anyone, even the people closest to her.

Enforcer and bear-shifter Bret Axel receives a call from his cousin who manages his Portland nightclub about suspicious activity. After obtaining the approval of his Alpha, he travels to Portland. Two nights later, screams of a woman shatter the silence of the dock and with the help of his cousin, they save her from being killed.

In this twisted tale of hunter and prey, two worlds collide as Bret falls for the human and then struggles to convince her that they are meant to be together. It’s up to him and the Crescent Ice Pack to get to the bottom of the brutal acts of one man. Will Nikki survive the wrath of her estranged husband, or will the murky world of Edward Calhoun destroy her and any who try to help?

What listeners say about Bear's Shadow

This is the second book in the Vendetta series, by author Desiree L. Scott. Once again, Ms. Scott has woven a story around characters whose loyalty, bravery, and compassion run deep. This story follows Bret Axle, a bear shifter loyal to the werewolves of the Crescent Ice Pack. A series of events leads him to bring Nikki Calhoun (an abused and traumatized woman) under his protection. A sweet romance blossoms between them as danger creeps ever closer. Though part of a series, this book can stand on its own, without needing to read Crescent Vendetta, first (although I highly recommend it, too). My one complaint is simply that some of the descriptions of violence were a bit off-putting. Nikki's husband is a vile cretin. I got it. I don't need such disturbing imagery to establish him as an irredeemable bad guy. That said, I really like how Ms. Scott only lets the chivalry go so far in her books. She understands the importance of letting the female character/victim exact justice by her own merit. She doesn't let the muscled hunks take the bad guys down. Rebecca Winder was the narrator again for this book, and did an excellent job. This book had more sex scenes in it than Crescent Vendetta, and they were really steamy! I liked the narrator's delivery a lot!

This is the second book in the Vendetta Series. I love this Series! Nikki and Bret's story is well written, suspenseful and captivating. I love to see again the characters from the first book. I need more in this Series! Rebecca Winder did an amazing job with the narration. I enjoyed listening to this audiobook. I received this free review copy audiobook at my request and I have voluntarily left this review.

This was a great shifter audio. the main character had his loyalties tested and showed what fabric he was made of. The author drew you into the world and kept you wanting more. The narrator did a fantastic job of bringing the characters to life and keeping you wanting to hear more. I was given a free copy of this audio in return for an unbiased review.

I loved this book. I am a huge fan of shifter books and this one is awesome. The start of the book with the variance of what a normal pack is sucked me in right off the bat! Highly recommend this book.

I absolutely love this series! The narration was amazing and will keep you entertained! The author did a great job with the character builds and plot. I read the first book in this series and enjoyed it as well! I look forward to reading more of her books! I was given a free review copy audiobook at my request and have voluntarily left this review.