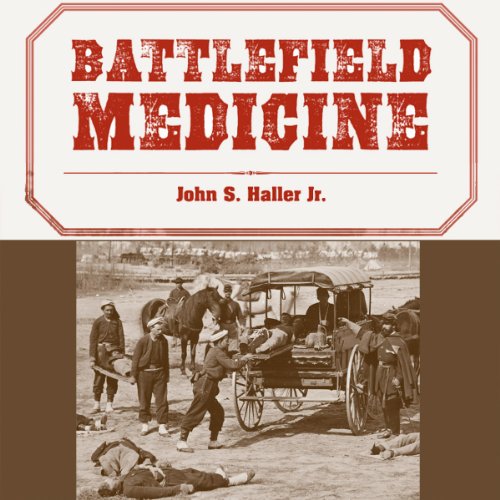 In this first history of the military ambulance, historian John S. Haller, Jr. documents the development of medical technologies for treating and transporting wounded soldiers on the battlefield. Noting that the word ambulance has been used to refer to both a mobile medical support system and a mode of transport, Haller takes readers back to the origins of the modern ambulance, covering their evolution in depth from the late 18th century through World War I.

The rising nationalism, economic and imperial competition, and military alliances and arms races of the 19th and early 20th centuries figure prominently in this history of the military ambulance, which focuses mainly on British and American technological advancements. Beginning with changes introduced by Dominique-Jean Larrey during the Napoleonic Wars, the book traces the organizational and technological challenges faced by opposing armies in the Crimean War, the American Civil War, the Franco-Prussian War, and the Philippines Insurrection, then climaxes with the trench warfare that defined World War I. The operative word is "challenges" of medical care and evacuation because while some things learned in a conflict are carried into the next, too often, the spasms of war force its participants to repeat the errors of the past before acquiring much needed insight.

More than a history of medical evacuation systems and vehicles, this exhaustively researched and richly illustrated volume tells a fascinating story, giving listeners a unique perspective of the changing nature of warfare in the 19th and early 20th centuries.

What listeners say about Battlefield Medicine

I read/listened to this book as part of my research for a project involving World War I. I found the information I needed within this book. The facts of war and battlefield life-and-death are presented in a very workmanlike way, and I wondered if this was written as a paper for a university course or thesis.This is very dry material and does not give the narrator much to work with. Having said that, I knew I was a bit in trouble when, within the first few minutes, Todd Barsness pronounced the word "havoc" as "have-oak." Later on, he pronounces the term "noblesse oblige" as "oh-blyyj" rather than its proper form of "oh-bleej."Small issues, but as the saying goes, God is in the details. I would not expect the print version to have typos. These mispronunciations are akin to audio typos in my mind.Just sayin'.

Yes. See above. And again, in his defense, the material is very dry, very much a research tome than a thrilling adventure back into history.

Was Battlefield Medicine worth the listening time?

For me, yes, because it provided me important information I will use for my project.

This book offers a well-researched view into the primitive world of battlefield hospitals through the First World War. In particular, I was horrified to read the injury and death statistics involved in each war chronicled, particularly WWI. The author did a thorough, workmanlike job of writing a book on a topic that is pretty grim.

Would you try another book from John S. Haller Jr. and/or Todd Barsness?

No. I wasn't even able to get into the book, because the narrator did such a poor job I actually looked him up to see if it was a computer-generated voice. His voice was so robotic and monotonous that it sounded computer-generated. He even made pronunciation mistakes, like say Have-ak for "havoc". The book itself read like a manual for an army medic, very dry and full of jargon, which, for a subject as interesting as this is a real shame.

Would you recommend Battlefield Medicine to your friends? Why or why not?

No, because of the reasons I wrote about above. I own over a hundred audible books, and almost always love listening to them, but this book was an exception.

ok. but too long

narrator was good. Although lots ofi nteresting facts ,information was scattered. it could have been a little shorter.