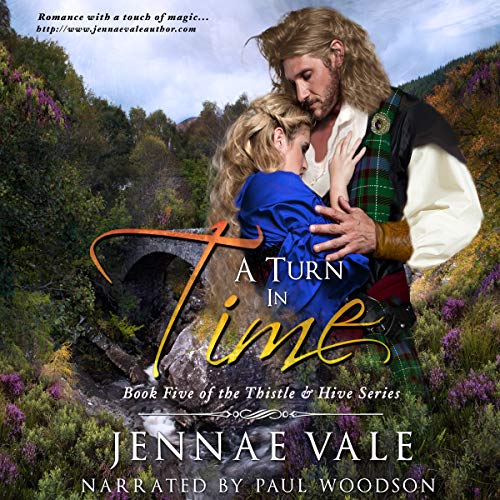 A Turn in Time

Summoned by his father to return home immediately, Dougall MacRae knows he cannot leave without his beloved Helene. He asks her to marry him and accompany him back to Castle Treun unaware that his father has plans for him to wed another in an attempt to strengthen clan alliances. He can keep Helene as a mistress, but not as his wife.

Helene has lived her whole life at Breaghacraig and has left it all behind to marry Dougall. She refuses, however, to remain at Castle Treun as his mistress. Fleeing in the dark of night with no idea how to return to Breaghacraig, Helene stumbles upon a beautiful stone bridge. Devastated and alone she contemplates life without Dougall.

As she pleads aloud for someone to help her, she is engulfed in a thick fog and when it clears she finds herself in the year 2016 in San Francisco, California, where Dougall’s betrayal has led her into the arms of the kind, handsome stranger who saves her in her hour of need.

What listeners say about A Turn in Time

I’ve enjoyed this Highland time travel series and Edna Campbell, who facilitates the heroes and heroines moving between current time and the past. Paul Woodson did a marvelous job with each character. I hope Audible releases the next 4 books with
Mr. Woodson soon.

This was a wonderful mix of modern day and medieval life. It had suspense, adventure and romance. The characters were beautifully written and wonderfully portrayed by Paul. He is a joy to listen to, and Ms Vales books are an amazing read.