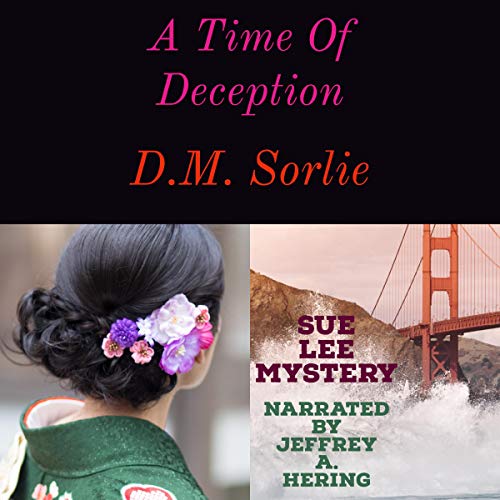 A Time of Deception

Her personal world is caught up in prejudice, deception, espionage, and murder after finding a cryptic message involving her beloved deceased uncle.

Set against the golden city of San Francisco and the majestic coastline of Northern California during the beginning of World War Two, D.M. Sorlie tells a powerful story about an extraordinary young woman before her time.

What listeners say about A Time of Deception

This is a short book (about 4 hours) set in San Francisco in 1941. Sorlie uses the beautiful coastline and city to full advantage in the story. Our hero is a young half Hawaiian half Japanese woman, Lieutenant Sue Lee Ono, who is an Army code breaker. Sue Lee came to San Francisco as a small child from Fuji after her sea captain father was murdered. Not long after graduating from Stanford University her uncle, who raised her, dies in an auto accident. As the story progress Sue Lee wonders if her uncle was actually murdered and who/why is her family being targeted. I found it fun that Sue Lee was fluent in English, Japanese, Italian, and German; I wonder how many more languages she will speaks as the series progresses. In this story she has to deal with prejudice that is raging in full force after Pearl Harbor. The story deals with espionage and murder and as the title tells us deception.

The book is well written and researched. Sorlie intertwines Sue Lee’s military duties, her family problems and World War II into a suspenseful story of intrigue. I understand this is book one in a new series. I am looking forward to more books in this series. Jeffrey A. Hering does a good job narrating the story. The author and narrator are new to me.

This reader is terrible.