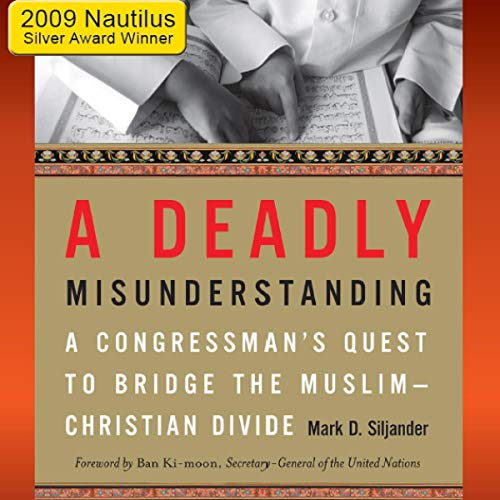 By: Mark D Siljander
Narrated by: Dave McQuade
Try for $0.00

Former Congressman and Deputy Ambassador to the United Nations Mark D. Siljander takes us on an eye-opening journey of personal, religious, and political discovery. In the 1980s, Siljander was a newly minted Reagan Republican from Michigan who joined Congress in the same generation as Newt Gingrich and Tom DeLay, ready to remake the world. A staunch member of the Religious Right, he once walked out of the National Prayer Breakfast when a Muslim speaker quoted from the Qur'an. Siljander recounts his spiritual odyssey starting as an anti-Muslim Christian conservative to a pioneer in discovering ground-breaking common roots between Islam and Christianity, while trailblazing a unique diplomatic path for bringing the two communities together.

This story inspires hope in our increasingly desperate world, uncovering compelling common ground for followers of these two super-power religions. At the root of our mutual discord are basic misunderstandings of foundational concepts such as the meaning of “religion” and “conversion”. His findings are drawn from twenty-seven years of study and real-world diplomatic engagements. Wherever he and his praying partners travel among Muslim nations, the outcome of their quiet diplomacy is respect, trust, love of friends and enemies, and significant real-world breakthroughs in crisis situations of which few are aware.

In A Deadly Misunderstanding, Siljander breaks down and re-assembles keys to understanding these concepts through the lens of the ancient Semitic languages of the Abrahamic religions, making paradigm-shifting discoveries that unite rather than divide us. His audiobook offers a new model based on ancient truths, proven to powerfully affect people, conflicts, countries, and potentially change cultures. This seemingly implausible path to peace dismantles the engine of terror without firing a single shot.

What listeners say about A Deadly Misunderstanding