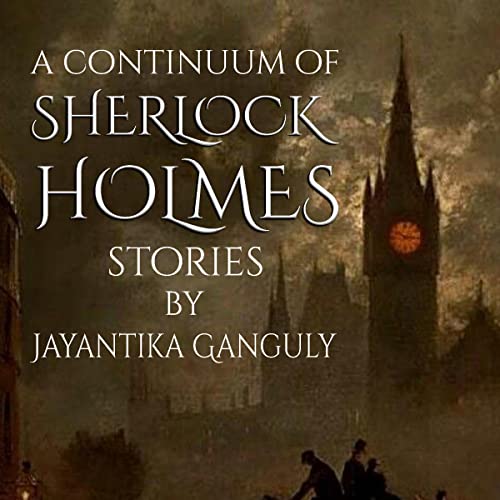 A Continuum of Sherlock Holmes Stories

Sherlock Holmes and Dr. Watson are no strangers to peculiar cases. Be it the dilemma of an Indian princess on the run, perfectly healthy people dropping dead as divine punishment, being challenged to a duel, a heartbroken and suicidal young man, a beautiful woman claiming to be Mrs. Holmes, a little boy who loves his dog, an old Scottish ghost that traditionally haunts husbands of pregnant women - there is very little they haven't seen (and solved). But, besides regular adventures, there are quite a few questions - Where was Holmes during the Great Hiatus? How was Sherlock Holmes as a child? Who was "the most repellent man"? What happened after "The Five Orange Pips"? What ingenious crime did Holmes solve by observing "the depth which the parsley had sunk into the butter upon a hot day"?

A Continuum of Sherlock Holmes Stories brings together a baker's dozen of such stories. These are all traditional-style pastiches published in various anthologies from 2015 - 2020, including The MX Book of New Sherlock Holmes Stories. Jayantika Ganguly, better known as Jay, is an international Sherlockian from India who believes there can never be enough Sherlockian stories.

What listeners say about A Continuum of Sherlock Holmes Stories

I enjoyed A Continuum of Sherlock Holmes Stories by Jay Ganguly. Good short stories so I can stop and start the audiobook. The narration by Kevin E Green is very good.

A dozen fairly short mysteries with the famous detective Sherlock ... along with his equally qifted brother Mycroft, These are pretty good as short stories go, lacking the time to really develop much of a plot (I was expecting this, so no real surprise here). While I enjoyed the simple stories weel enough, the performance was solid enough to pull it up to "I really liked it" 4* and a recommendation to play it for when you can just listen to a little bit of a story at a time.

I was given this free review copy (ARC) audiobook at my request and have voluntarily left this review.
#FreeAudiobooksGiveaways #AContinuumOfSherlockHolmes

A wonderful collection of very original stories, done with a wonderful flair and yet still respecting the characters at their true form.

We get to see Holmes as a child, observing his brother solving a case, and then, we see Watson himself being the one solving another case, and we everybody befuddled at the apparition of a 'Mrs. Holmes'; we have Indian princess, a kid who dearly loves his dog, and people falling dead for apparent divine design... this is a truly superb collection of stories and I find really difficult to choose a favourite one.

Kevin E Green does a great job with the narration, too.

As somebody who grew up reading Sherlock Holmes and watching the TV series in the 1980s I was rather sceptical about about this book. I had nothing to loose as it was given to me free of charge in return for an honest review. I need not have worried.
The stories are absolutely first class and totally in keeping with the original writings. I cannot single out a single story as being the star of the publication as they are all that good. The author Jay, is to be praised for having carried this off.
The narrator is just brilliant as well.
This is a must read for any Sherlock Holmes fans or those that want an introduction to his writings.

I love everything about Holmes and that era, have read and listened to quite a few and this one was another good collection. I liked the compilation of short stories easy listening one or two is not quite up to standard but on the whole, a wonderful listen. The narrator Kevin E Green also did an excellent job.

Who would thought I would listen to this book but it was so much fun, I like the way the stories were short and easy to listen to. There were some that didn't work for me but on balance it all worked. From the Indian Raj to the British Upper class to Montreal heirs (that one was my favourite and made me laugh).

I was given a free copy by the book club - audible listeners but this review was in no way influenced by that and it is my own.